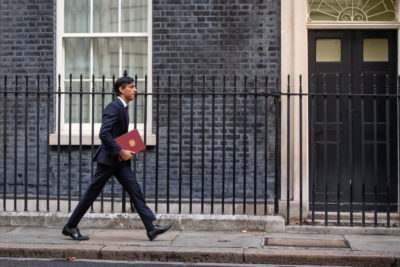 Chancellor Rishi Sunak has defended his Spring Statement, saying that he “can’t solve every problem” in the wake of Covid and the ongoing Ukraine conflict.

Quizzed over tax hikes on Sky News’ Breakfast programme, he admitted that they were increasing overall despite his fresh tax cuts. However he expanded on the “context” of the plans, arguing that they come post-Covid and in the midst of Russia’s invasion of Ukraine

He argued that the Spring Statement will help struggling households but that he “can’t solve every problem”.

“That’s the context for all the actions that I have had to take,” he explained, adding: “But I know families are struggling right now with the cost of living which is why yesterday I announced a tax plan which delivers the biggest net cut in personal taxes in over a quarter of a century, cutting fuel duty five pence a litre, raising national Insurance thresholds, giving 30 million workers a tax saving, a typical worker saving £330 and cutting income tax for the first time in 16 years, putting more money in people’s pockets.

“So whilst I can’t solve every problem, and I have always been honest with people about that, I can make a difference, of course that is what I want to do and I think the plan that we announced yesterday will do exactly that and support hard working British families,” he went on.

When posed with whether he was  “really in touch with real people’s lives,” the chancellor hit back: “This has been put to me many times and what I say is judge me by my actions and people can see how I have acted over the last couple of years as our country went through a very difficult period and I think I demonstrated that I am standing by British people when we go through difficult things.

“I introduced things like furlough, I helped this country get through a pandemic. And partly because of the actions that I took the economy is in a much stronger place than anyone expected now, with more people on payroll than we had before the pandemic, unemployment back down to the record low levels we saw before the crisis.

“That doesn’t happen by accident, that happens because of the policies that we have put in place.”