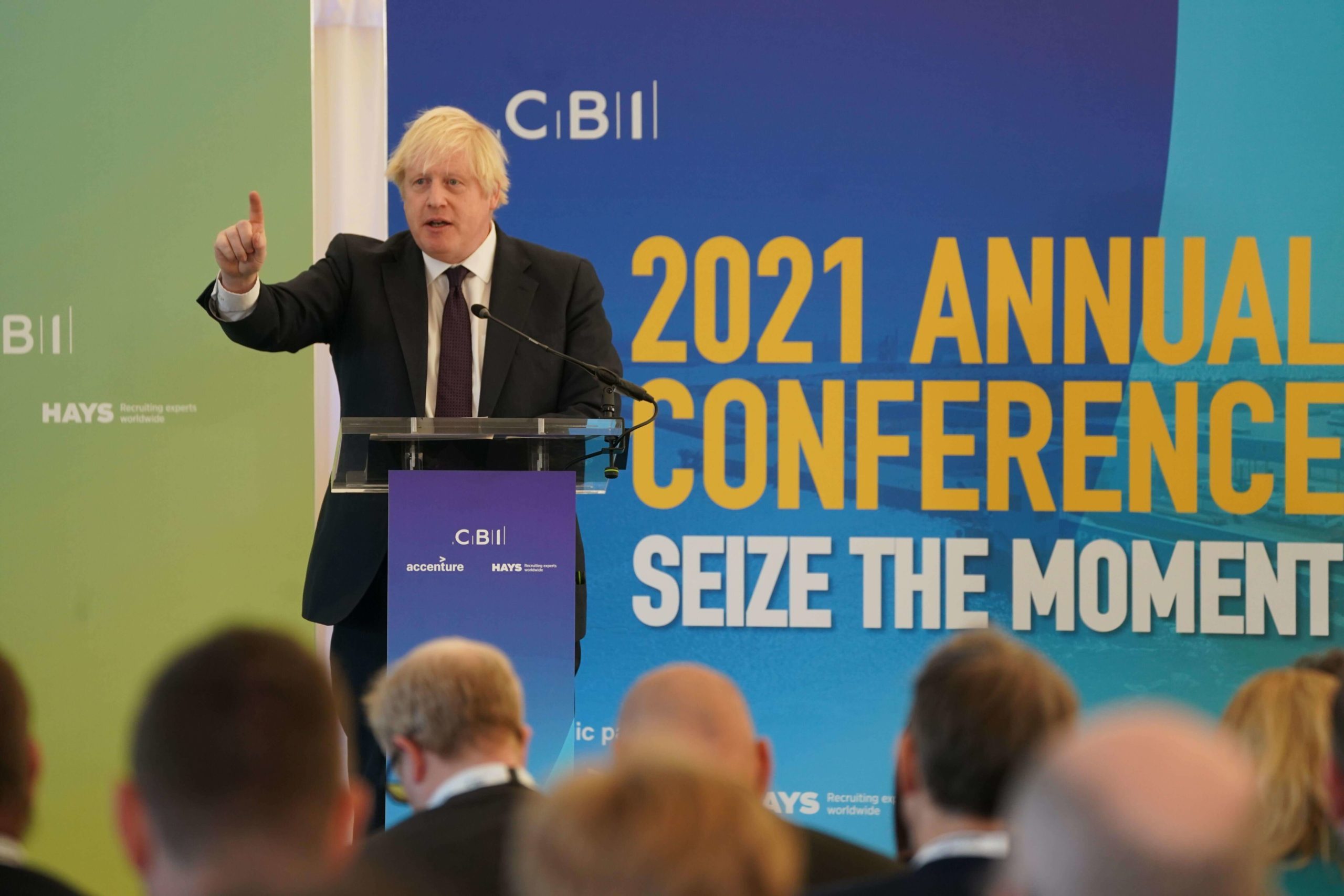 Government will ‘get to’ lowering taxes, PM tells CBI

In his address to the Confederation of British Industry’s (CBI) annual conference today, the prime minister has said the government plans to lower taxes and has defended the government’s downscaled rail plans and proposals for ‘green’ economic growth.

He said the UK’s economic struggles in the 1970s caused a “drain of the human spirit”, saying that he “would much have our problems today” which he said were caused “by a return in global confident and a surge in demand”.

He suggested that the UK has an “opportunity to fix these supply side problems” and the “woeful imbalance in productivity across our country,” giving it the potential to be the “biggest and most successful economy in Europe… Fate has handed us the opportunity to do that”.

He went on to compare the opportunity for a “green industrial revolution” to the UK’s “first mover” role in the Industrial Revolution that played out across the eighteenth and nineteenth centuries.

He emphasised the leading role of private industry, but compared the government’s 10-point plan for a green industrial revolution as a “new Decalogue” that he brought “back from Mount Sinai”.

Mr Johnson paused his speech for several moments as he flicked through his papers, appearing to have lost track of where he was speaking.

He began again by describing the UK’s role as a ‘tech unicorn’, arguing that wider “dispersal” of this industry was wanted, but that “there are limits as to what the Government can do”.

He argued that “Government cannot fix everything and Government should sometimes get out of your hair,” and said that lower taxation was part of this.

He also went on to say that: “Yesterday I went, as we all must, to Peppa Pig World… I love it. Peppa Pig World is very much my kind of place: it has very safe streets, discipline in schools.”

Adding that: “no Whitehall civil servant would conceivably come up with Peppa”.

He seemed to channel the idea of the cartoon animal as a symbol of so-called global Britain and “UK creativity”, explaining: “Who would have believed that a pig that looks like a hairdryer or possibly a Picasso-like hairdryer, a pig that was rejected by the BBC, would now be exported to 180 countries, with theme parks both in America and China?”

In response to a question at the end of the speech, he re-emphasised his claims regarding tax, saying that: “If you ask me if the Chancellor wants to go further and reduce tax burdens on consumers and businesses yes of course he does, but we have just been through a pandemic that has just cost hundreds of millions of pounds,” adding that ” you have got to do it [lower taxes] in a sustainable way” and that the government planned to “get to it”.

Johnson also defended the government’s downscaled plans for better rail links across the North and the Midlands, saying that media commentary on the issue has been “missing the point”.

“There is a lesson in what happens when you tell the British people you are investing £96bn… some of the coverage was missing the point, let me put it like that,” he argued.

“To think that you always have to dig huge new trenches through virgin countryside and villages and housing estates. If we had done Crossrail like that…”

The CBI’s Director-General told BBC Radio 4’s Today programme earlier today that regional bosses are “disappointed” and “upset” with the decision to scrap the leg of HS2 set to be constructed between the Midlands and Leeds, along with the minimisation of the Northern Powerhouse Rail link plans.