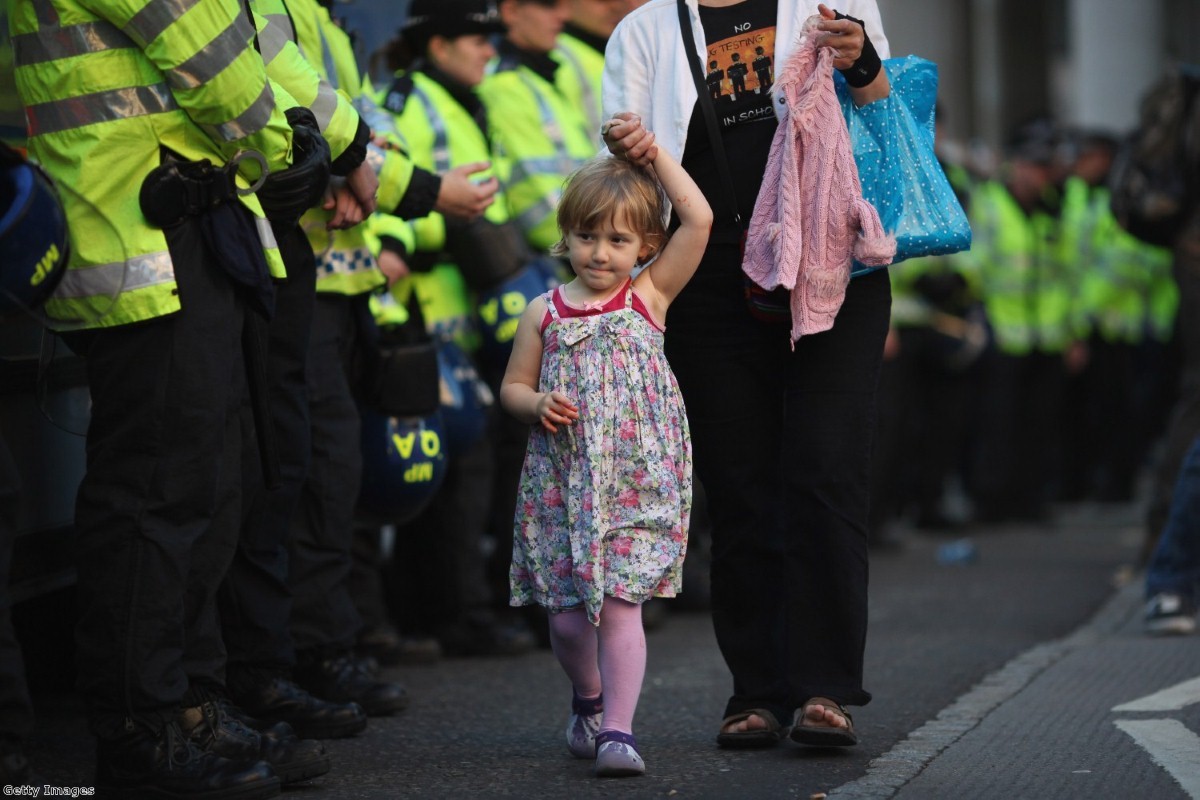 Disabled activists fight for protest camp in shadow of parliament

Disability protesters tried to set set up a protest camp outside Westminster Abbey last night, in a move reminiscent of the Occupy camp outside St Pauls.

About 100 protestors demonstrating against the closure of the independent living fund were met by massed ranks of the police, but they were also joined by activists from UK Uncut, who had been targeting Boots for tax avoidance.

Around 100 people, including about 40 in wheelchairs, set up tents at 16:00 BST although scuffles with police and at least one arrest led to just a few people in wheelchairs remaining.

At least ten police vans were part of the operation, with three rows of officers meeting the relatively sparse ranks of disabled people.

Many accused the police response of being overkill and reports from the ground suggest tourists were baffled and concerned at the overwhelming response from the Met.

Protestors said they attempted to negotiate their presence at the Abbey – which they intend to last until July 22nd – with dean of Westminster John Hall, but this was rejected.

The police then told them to leave the grounds or face arrest. At this point many left, leaving a hardcore rump of disabled people, mainly in wheelchairs, continuing the demonstrations. Some of them locked themselves to the gates of the abbey.

The group sent a letter to Justin Welby, the archbishop of Canterbury, urging the chruch not to remove them from its grounds.

The church has bad memories of dealing wth protests after the political convulsions which hit it after Occupy set up camp in St Pauls.

That event triggered a spate of resignations, as church authorities engaged in a bout of soul-searching about the right way to deal with the demonstration and their view on the protestors' grievances.

"We have had debate after debate in parliament. We have had 100,000 people sign a petition for another and the government refused," Labour backbenchers John McDonnell told the Guardian.

"So, people have got no other option but to take direct action to expose what is going on. That is what is happening here today. It is a peaceful demonstration and I wholeheartedly support it because people are desperate."

The independent living fund is being closed and the funds, which will no longer be ring-fenced, devolved to local authorities.

The fund is designed to help disabled people stay at home rather than in care.

"We feel we have no choice but to take direct action in the shadow of parliament because the situation in this country under the austerity programme has become impossible for many disabled people, their carers and non-disabled people to survive," Dpac said in a statement.

A DWP spokesperson said: "We are world leaders in support for disabled people, spending around a fifth more on disability benefits than the EU average.

This is not Repressive Russia. This is not war torn Despotic Syria. This is the United Kingdom, today, 28 June 2014. pic.twitter.com/jfYlVhlicw

"However, changes to social care have called into question having a separate funding stream through the independent living fund, especially since the vast majority of disabled people with care needs are already looked after through the adult social care system.?

"That is why we are transferring more than £260m of the ILF's budget to local authorities – and the devolved administrations – to ensure disabled people get the targeted support they need to lead independent lives."