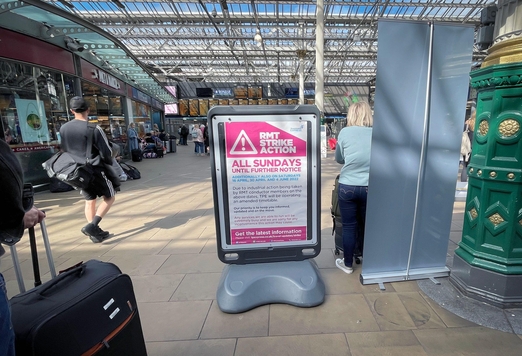 With the transport unions having voted on the “biggest rail strike in modern history”, free-market campaign group the TaxPayers’ Alliance has revealed that just four transport trade union bosses had a combined total remuneration of almost £500,000 during the first year of the pandemic. This included over £4,000 in courtesy car benefits for two RMT bosses.

The report also found that Transport for London had 880 FTE trade union representatives in 2020-21, of which 35 spent 100 per cent of their working hours on facility time.

19 TfL trade union representatives spent between 51-99 per cent of their working hours on facility time.

Former RMT assistant general secretary, Mick Lynch, had total remuneration of £118,450 in 2020, including £22,175 in pension contributions.

General secretary of the Transport Salaried Staff Association (TSSA), Manuel Cortes, had a total remuneration of £121,773 in 2020, including £18,151 in pension contributions.

Danielle Boxall, media campaign manager of the TaxPayers’ Alliance, said: “Taxpayers are fed up with lectures and disruption from loaded union leaders.

“These red barons are dooming commuters to misery, but are sitting comfortably as some of Britain’s biggest earners in taxpayer-backed unions.

“Transport for London should take a stand against these hypocritical union heads.”