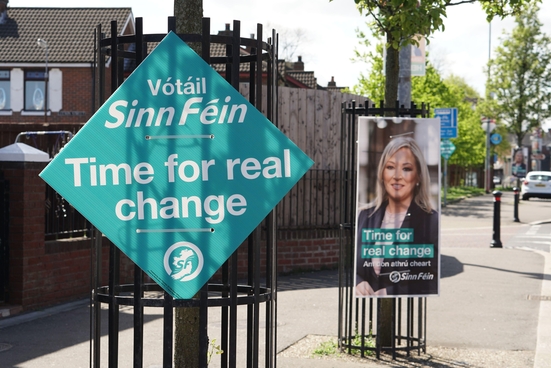 The shadow chancellor told Sky News this afternoon: “I don’t think that results on Thursday tell you anything about what people want in terms of their future relationship with the United Kingdom or indeed with the Republic of Ireland.

“Of course it is a decision for the British government whether there are referenda of these sorts whether it is in Northern Ireland or in Scotland.

“Let’s see what happens in the results, not just in Northern Ireland but in the whole of the United Kingdom.”

“People in Northern Ireland tomorrow are voting on a whole range of issues, not least on the cost of living crisis which is affecting people right up and down our country including in Northern Ireland so I don’t think you can make an implication by how people vote what they want to see in terms of their future relationship with the whole of the United Kingdom,” she went on.

The Irish nationalist party, Sinn Féin, are predicted to displace the Democratic Unionist Party as Stormont’s single biggest party for the first time since devolution.

This would mean Sinn Féin’s inaugural First Minister would be selected.

The party is left-wing and republican. In English, its name is translated as ‘(We) Ourselves’. It is the only political party that is active both in the Republic of Ireland and in Northern Ireland.

Sinn Féin currently holds seven seats in the House of Commons, albeit Sinn Féin MPs refuse to take up their seats as they would have to swear an oath of allegiance to the Queen to do so.

Earlier today, environment minister George Eustice brushed off questions over Westminster anxieties over the vote, explaining: “These are democratic elections. We have got a very clear approach in Northern Ireland under the Belfast Good Friday Agreement where you have power-sharing.

“So whoever the largest party will be there must be a power-sharing executive. That is how things are established in Northern Ireland.”

When quizzed over whether the UK government would consider a border poll, Eustice stated: “We will deal with whatever we are faced with after we have the results on Thursday.”