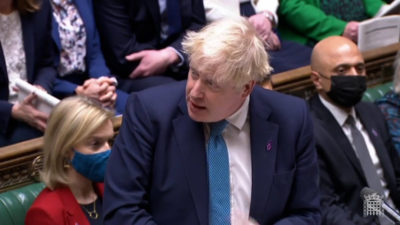 Mr Blackford, the SNP’s leader in Westminster said this afternoon: “Mr Speaker, every moment this prime minister lingers, every nick is a death by a thousand cuts, is sucking attention from the real issue facing the public.

“Tory cuts, Brexit and the soaring cost of living have pushed families into poverty. The impending National Insurance tax hike hangs like a guillotine while they eat cake.

“How much longer will Tory MPs let this go on for? How much more damage are they willing to do? It is time to get this over with. Show the prime minister the door.”

The prime minister then replied, “Well, I don’t know who has been eating more cake” as fellow Conservative MPs jeered him on.

Beat’s Director of External Affairs, Tom Quinn, said in light of today’s events: “It is completely unacceptable that the Prime Minister should resort to making fatphobic comments. It shows a clear lack of regard for, or understanding of the 1.25 million people in the UK affected by eating disorders, and we are extremely disappointed that he has deemed this to be an appropriate response.

“We would urge the Prime Minister to educate himself on the seriousness of these mental illnesses, and limit his comments of other MPs to their actions, not their appearances.”

Founded in 1989 as the Eating Disorders Association, Beat describe their mission as “to end the pain and suffering caused by eating disorders”.