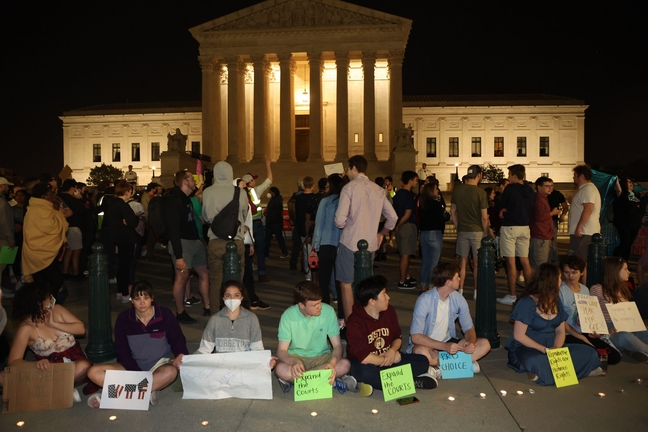 The UK government has reaffirmed its support for abortion rights, following a leak indicating that the US Supreme Court could overturn Roe V Wade.

Quizzed over the news this afternoon, the prime minister’s official spokesman said: “My understanding is this comes from a leaked document rather than an official decision and of course as you’d expect it is a matter for the US courts in general.

“The UK fully supports women’s reproductive rights globally and including the right to access safe and legal abortion,” he went on.

During this morning’s broadcast round, international trade secretary Anne-Marie Trevelyan hinted that UK concerns over the matter could be raised through private diplomatic channels, but said the Foreign Office would “wait and see… whether this is a true document or not.”

She added that she assumed: “…there will be a great deal of anxiety if that seems to be true, and I suppose if it goes back to a state-by-state level, the US will have to deal with that in a different way.”

Commenting on the news, Clare Murphy, chief executive of the UK’s largest abortion provider BPAS, said: “Banning abortion does not remove women’s need to end a pregnancy. It simply makes it more difficult and more dangerous for women. It forces women to either make long journeys to access the care they need, or take matters into their own hands. Those that suffer the most are those who can least afford it.”

“Roe v Wade has shaped abortion law in the States for the last 50 years by opening the door to widespread abortion access. If the Supreme Court were to strike down part of it, it would represent a shift towards life-affirming laws. In turn, this will help save lives and protect mothers from the trauma of the abortion experience,” she went on.

Meanwhile Tarah Demant, an interim director for Amnesty International USA, argued that the ruling would amount to “an egregious violation of human rights to deny people access to abortion,” should it be confirmed

“This will force women, girls and people who can become pregnant to carry pregnancies against their will and to seek out unsafe abortion,” she went on.

Catherine Robinson, a spokesperson for pro-life charity Right To Life UK, said in light of the news: “To the extent that this leaked document is an attempt to put public pressure on the Court so that it will not overturn the current abortion law, it is a scandalous attack on the rule of law. It is the job of the Court to interpret law in light of the Constitution and it should not be swayed by political lobbying in this matter.”

“However, Justice Alito’s majority opinion represents an opportunity to overturn an unjust law which has led to the deaths of over 62 million babies since 1973. If Roe vs Wade were to be overturned, it would be the beginning of the legislative battle over abortion, certainly not the end.”

“Importantly, this law change would not actually ban abortion or prevent anyone from having an abortion. Rather, it makes abortion law a matter for states to decide. Some states will allow abortion without restriction and others will likely provide robust legal protection for unborn children throughout pregnancy. ”