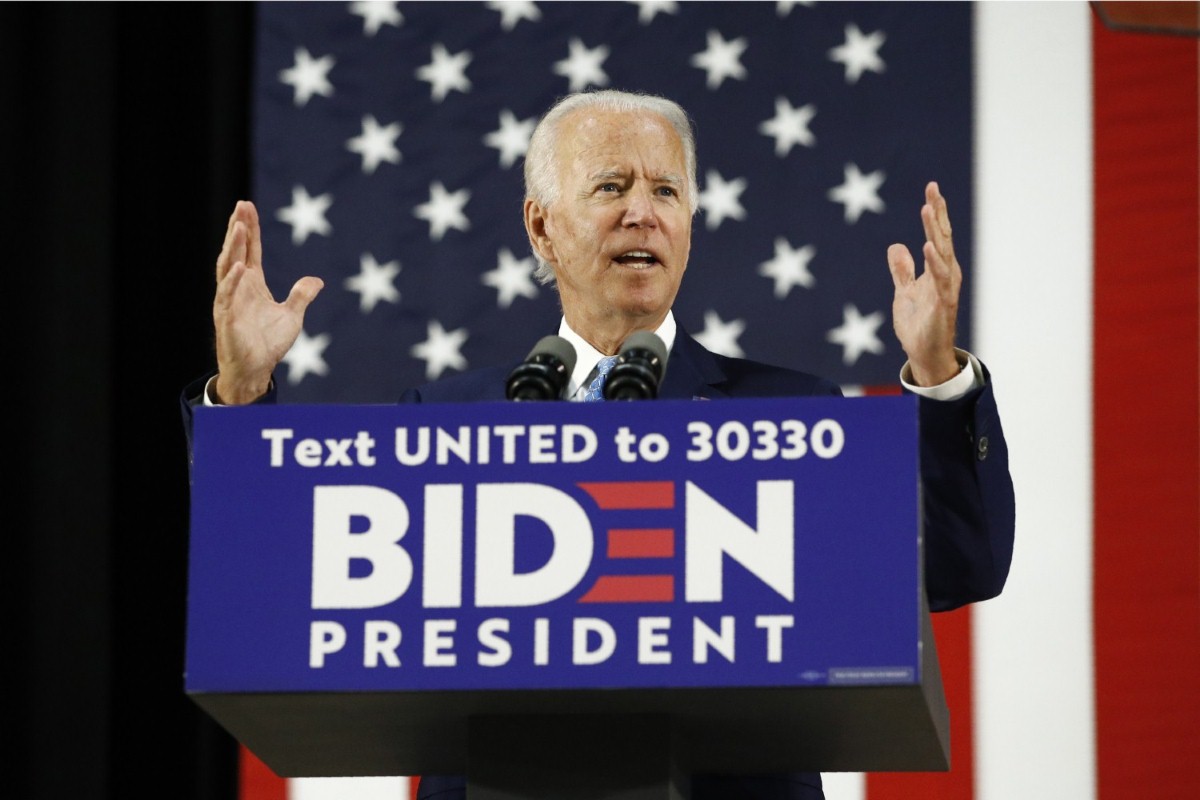 ‘Despair’ the greatest obstacle to a Biden presidency

Last month, a Politico reporter attended a brunch for around 40 affluent black professionals in the Detroit suburb of Grosse Pointe Woods and spent six hours talking about the presidential election. Every single person there expected Donald Trump to win in November because Republicans would turn out and Democrats wouldn’t, even though all of them personally planned to show up for Joe Biden. “I’m going to vote,” said one woman. “But Trump’s getting back in office either way.”

On 24 June, a few days after the brunch, a New York Times Upshot poll gave Biden an extraordinary 14-point lead over Donald Trump, with gains in every demographic, turning red states purple and purple states blue while endangering the Republicans’ Senate majority. There hasn’t been a summer polling margin this wide since 1996, when Bill Clinton eventually thumped Bob Dole by carrying 31 states, and no candidate has hit 50% since Ronald Reagan in 1984, prior to his 49-state demolition of Walter Mondale. In the latest credible polls, Biden’s lead ranges from 5-17 points.

On paper, this seems obvious. Biden is facing a weak and erratic President who has bungled his response to both coronavirus and the Black Lives Matter protests, lost the strong economy that he inherited from Barack Obama, and never seen his approval rating exceed 50%, even during the initial rally-around-the-flag phase of the pandemic that favoured incumbents around the world. So why do so many people find it so hard to accept that Trump is exceedingly likely to lose?

Well, for the same reason that I just replaced “will” with “overwhelmingly likely to”. Britain has just marked the fourth anniversary of the EU referendum, which saw nationalist populism drive a horse and cart through liberal orthodoxies. Trump’s much more shocking victory in November completed 2016’s double whammy and the liberal left has not yet recovered from that compound trauma. By trampling long-held assumptions about political behaviour into the dirt, it created a terrible new form of received wisdom: What’s the worst that can happen? Bet on that. I’ve seen numerous friends confidently predict that Trump will either win or refuse to accept defeat, offering no evidence except their pessimism.

Writing in the New Statesman recently, Andrew Marr warned against “the ‘now-next illusion’ — the trap of thinking that today’s vivid headlines are a good guide to the near future”. Criticising the American intellectual James Burnham 74 years earlier, George Orwell noted the same tendency among political “prophets” who believed that whatever was happening at the time of writing would continue to happen, only moreso: “Burnham sees the trend [towards oligarchy] and assumes that it is irresistible, rather as a rabbit fascinated by a boa constrictor might assume that a boa constrictor is the strongest thing in the world.” Since 2016, right-wing populism has been our boa constrictor and its face is that of Donald Trump. This strong bias towards pessimism has survived even the Democrats’ impressive gains in the 2018 midterms, when the Trump playbook demonstrably failed. For Britons, watching the campaign in the aftermath of a Tory landslide and exit from the EU, it is even harder to think positive. Psychologically, we are still fighting the last war.

Let us look at the evidence. Trump is exactly the President that his fiercest critics said he would be: unstable, incurious, petty, vindictive, paranoid, ignorant and inept. Whenever a major test has come along, he has flunked it. While his base remains fanatically loyal (though apparently incapable of filling an arena in Oklahoma), this historically unpopular president has shown no ability to expand it, nor even retain his winning coalition, because he is utterly incapable of not doing the things that alienate people. Millions of Americans hate him like they have never hated anyone before, while many of the voters who took a punt on him despite their reservations, because they hated Hillary Clinton, or hoped that he would rise to the occasion, are tired of him turning the country into 24/7 rolling chaos. They know what another four years of Trump would look like. One plank of his campaign, the economy, has been snatched away by Covid-19 while another, racial grievance wrapped in the tissue paper of law and order, has proved limited in the face of Black Lives Matter’s popularity. Lest we forget, even though it feels like several years ago, he is one of only four presidents ever to be impeached.

His opponent, meanwhile, is perennially underrated. As Bernie Sanders discovered, Biden’s hold on key demographics, notably older black voters, is ultimately undiminished by his low-key campaigning style and occasional blunders. That’s how he went from clear favourite to underdog to comeback kid. If Biden does not generate great excitement, then nor does he inspire intense hatred, as Hillary Clinton did. He made few enemies as Barack Obama’s genial vice president; Sanders himself is personally fond of the man. Neither his son Hunter’s business dealings in Ukraine, nor former staffer Tara Reade’s sexual harassment allegations, have damaged him. Claims that Biden is suffering from cognitive decline (as opposed to continuing a tradition of gaffes that goes back to the 1980s) backfired in his final debate with Sanders by setting the bar too low. The more people say that he is sleepy and doddery (a risky line of attack for the increasingly incoherent Trump), the less he has to do to appear impressive. His responses to Covid-19 and Black Lives Matter have struck the right tone of compassion and competence at a time when the White House offers neither.

Now, only a fool would say that it’s impossible for Trump to win. Perhaps Biden isn’t Clinton in ’96 but Michael Dukakis in ’88, whose substantial lead in early summer evaporated by the autumn. The polls will inevitably narrow. Perhaps he will make a truly disastrous mistake, or fall foul of a scandal that we cannot foresee. Perhaps disillusioned members of the Democratic base will be unpersuaded that the difference between Biden and Trump is substantial enough to get them to the polling booth. Beyond the standard electoral potholes, there are valid concerns about Trump using voter suppression, mass disinformation, and, if the election result comes down to the wire, legal challenges in order to remain in office, although it is worth reassuring anxious friends that constitutionally he cannot simply cancel the election, nor refuse to step down if he is defeated. He may have the instincts of a tyrant but not the power.

Complacency duly guarded against, the smart money is on Trump losing in November, but this is where the trauma of 2016 raises its head. The polls weren’t wrong: it really was extremely unlikely that he would win, and Hillary Clinton really did win the popular vote, and yet 77,774 votes in the right districts of the right three states gave Trump the presidency. But just because an improbable thing has happened once, it doesn’t mean that an even more improbable thing will happen next time. Remember everything that had to go wrong for a much more divisive Democratic candidate, with a narrower lead and a more hostile media, to lose in 2016. If populism’s opponents used to be far too complacent, then we are now too neurotic – prone to seeing a flailing mess of a political project as an unstoppable force. Fear should inspire Trump’s opponents to vote, campaign and fundraise with electric urgency but despair will not. Despair is the greatest obstacle that Biden needs to overcome.

There are countless reasons to want Biden to decisively rout Trump in November. The one that matters whether or not you live in the US is the opportunity to finally provide catharsis for the trauma of 2016. It wouldn’t instantly heal America or purge the poison of white nationalism. I don’t even know what kind of president Biden would be, except a better one. Still, a result that proved that anger, resentment and race-baiting aren’t enough, that flagrant lying can only go so far, that populism is not unbeatable, that the laws of political gravity haven’t been permanently suspended, would go a long way to rescuing us all from the nightmare land of anything-can-happen in which we have been living for the past four years. We’ve spent too long feeling like Orwell’s rabbit, hypnotised by the boa constrictor. If nothing else, a Trump defeat would break the spell.

Dorian Lynskey writes about politics and culture for titles including the Guardian, Observer, GQ and New Statesman. He is the author of 33 Revolutions Per Minute: A History of Protest Songs and The Ministry of Truth: A Biography of George Orwell's 1984. He co-hosts the Remainiacs and Bunker podcasts. You can follow him on Twitter here.