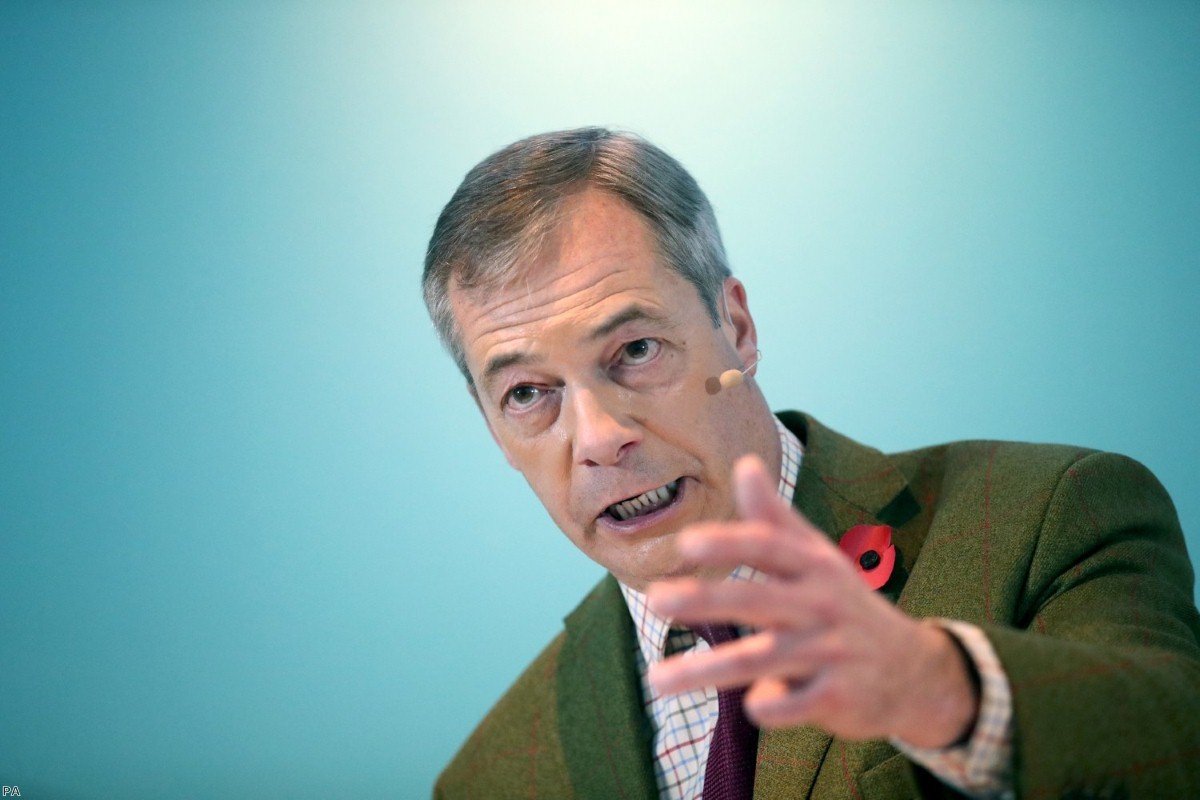 When he supported Norway: The Brexit policy Farage would rather forget

"Leaving the EU will have significant geopolitical and economic consequences. But we believe it is unrealistic to expect a clean break, immediately unravelling forty years of integration in a single step."

So read the opening paragraph of a detailed plan for leaving the EU, which Nigel Farage's Leave.EU signed up to in January 2016.

We all instinctively know that politicians shift the goalposts when it suits them, but it is rare that they do so as quickly or as blatantly as the leader of the Brexit party. It is rarer still to be able to pin down precisely the extent, based on indisputable documentary evidence.

Farage is currently touring the country on a platform that anything other than a "clean WTO Brexit" is not real Brexit and that this not having already happened is a huge betrayal.

Yet in January 2016, Leave.EU agreed a detailed plan for leaving the EU that outlined a careful separation over two decades, membership of the single market in the medium term and, most astonishing of all, a second referendum to approve the withdrawal agreement.

This glossy, Leave.EU-branded 420-page document was the product of a meeting between Arron Banks and Andy Wigmore on the Leave.EU side and Richard North on behalf of The Leave Alliance.

"As part of the package, Leave.EU has decided to adopt Flexcit as their formal exit plan," North wrote at the time. Changes, including a rebranding exercise of 'Flexcit' to 'The Market Solution', were agreed. And, sure enough, a couple of days later the document saw the glare of publicity.

This plan for Brexit would be "a process, not an event", the document acknowledged, and went on to provide "a template for the next twenty or so years". It proposes that "continued participation in the EU's single market will be necessary, for the short to medium term".

The first stage of the plan would be "limited to a smooth, economically neutral transition into the post-exit world". This would be "subject to a referendum to approve the initial exit agreement". It envisages the exact second referendum that Farage now labels a "democratic outrage".

This alliance and its proposed plan ultimately fell apart fairly quickly. By the end of February The Leave Alliance and Leave.EU had gone their separate ways. But it matters for three crucial reasons.

First, it was agreed at a pivotal moment, when Farage was trying to bring together big hitters from outside the Ukip tent – and he succeeded, briefly, thanks to this more sensible approach. A couple of weeks after The Market Solution was published, Farage announced Grassroots Out – an umbrella grouping, which brought together Leave.EU and figures such as Labour's Kate Hoey, Conservative Peter Bone and former minister Liam Fox.

Second, it shows that, as late as 2016, most leading Brexit campaigners accepted that there were infinite varieties of Brexit and they included a Norway-like relationship. And yet these varieties were branded almost immediately after the referendum 'Brexit in name only'.

Third – and perhaps most important – it is, to this date, the only detailed exit plan any Leave campaigners have ever presented to the public.

This conciliatory, careful approach to Brexit was part of Farage's bid to secure designated Leave campaign status at the time. The document was initially included in the bundle they intended to submit to the Electoral Commission.

Farage was even courting Vote Leave, which went on to become the official campaign, in an attempt at a coalition. North was also having regular meetings with Dominic Cummings. "But something then happened – I don't know what," recalls North. "Cummings went dark on me."

What happened, we can only ultimately guess, although Cummings is illuminating on the issue in his blog. "Creating an exit plan that makes sense and which all reasonable people could unite around seems an almost insuperable task. Even if one succeeded, the sheer complexity of leaving would involve endless questions of detail that cannot be answered," he wrote. "There is much to be gained by swerving the whole issue."

The detail of how Brexit would actually work was, basically, too hard a sell. If people had got a glimpse of the decades of difficult trade-offs and punishing stalemates through which we are currently living, they would never choose them.

Much easier to cynically promise simple, brilliant, no-downside deals, concluded over a cup of tea in one afternoon, then pin the blame onto someone else when they do not materialise. Ireland, the EU, May, Johnson, parliament, judges, 'Remoaners' – anyone would do.

And what of Farage's shift? Some say he killed the Flexcit solution behind the scenes. Some say he was backing Norway-type models even in late 2015 and early 2016. Certainly he's on record praising Norway on numerous other occasions. But either way, he was the leading figure in Leave.EU and it put its branding on The Market Solution document.

Why did he go from agreeing to a careful 20-year process in 2016 to claiming anything other than an immediate no-deal exit is not "real Brexit" in 2019?

When Alexandra Phillips, Farage's former aide, left Ukip to join the Tories in 2016, she wrote a remarkably clear-eyed piece. "With the central uniting factor, the heart of the party, now ripped out," she wrote, "Ukip paradoxically has to rely on Brexit failing in order to maintain relevance."

Since being elected as a Brexit Party MEP in May, she's changed her tune again. She rides the gravy train now. But her original point still stands.

When what you offer is a mirage, your success depends absolutely on keeping it at a distance at which it still looks convincing and desirable. When you know that what you have promised to deliver is undeliverable, your only option is to keep rewriting your original promise.

The resulting turmoil might mean misery for us, but it's a living to them.