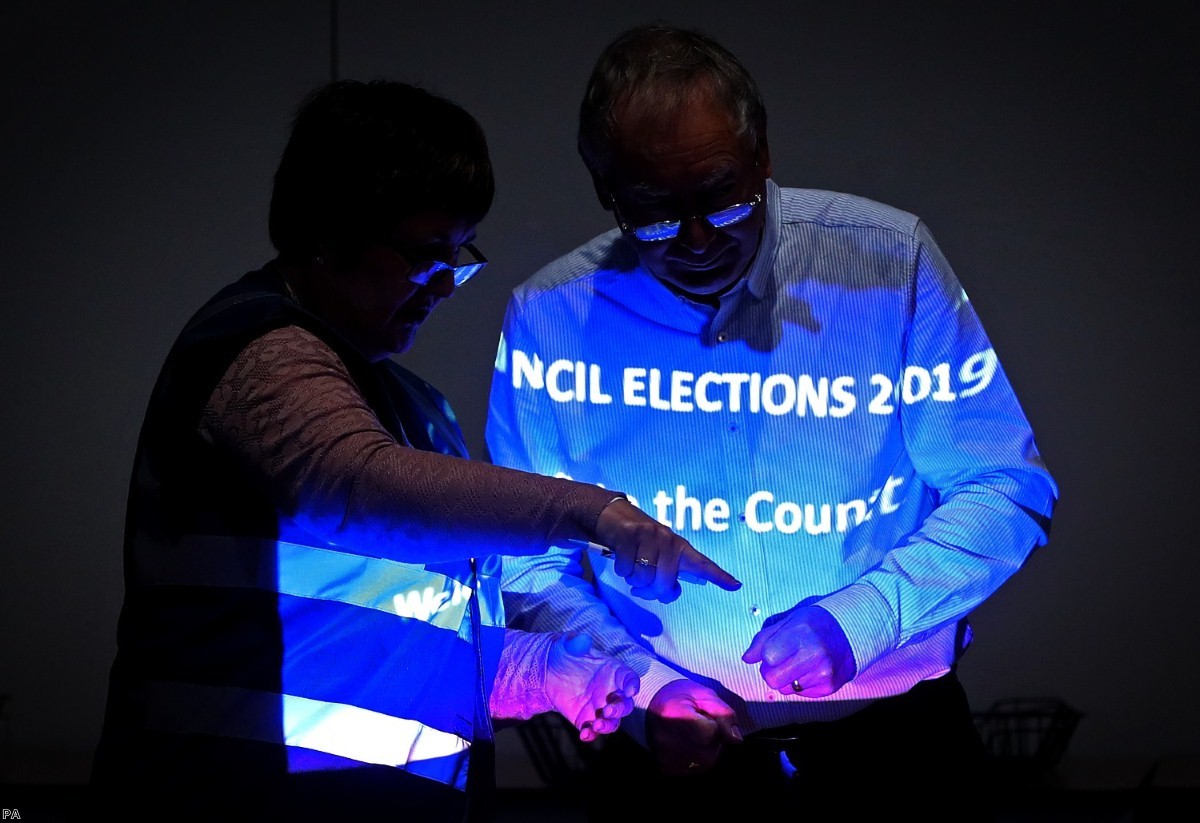 Yesterday's local elections in England and Northern Ireland took place as support for Labour and the Tories sinks to modern lows, with British politics descending into an endless fiasco. Fewer than half the results – and none in Northern Ireland – have so far been declared, but already key trends are emerging. And they are far from business as usual.

Anti-politics is the big winner

The most important trend so far is the rise in support for independents. There's a risk the gains by independents – more than 200 seats and counting – will be overlooked in the party political scramble and Brexit narratives that will dominate today's coverage.

But bear in mind that outside a handful of districts, such as Ashfield, independent candidates are not in organised, well-resourced groups. They are unlikely to have local name recognition or campaign teams. And yet they have been elected in their hundreds, nearly trebling their ranks in the seats contested yesterday.

Local factors will of course have had an influence. But the most logical explanation at a national scale is that this is the ultimate protest vote – a vote against all established party politics. A vote for the authenticity which comes from subscribing to no higher authority than the voters, or your conscience. Journalists ought to be talking to newly elected independents before anyone else.

How that might translate to a national election is something we can barely conceive of at this point – though East Devon's Claire Wright must now fancy her chances of becoming the first MP elected without any significant party background for decades.

The Tories have had a very bad night…

Every local election gives each party's leadership something to cling to. And Tory spinners will this morning repeat on loop that they have won control of North East Lincolnshire and Walsall councils, while making significant headway in Stoke.

But in other Leave-voting areas where Labour fell back, they have failed to take advantage. The big gains from Labour in Ashfield and Bolsover have been by independents, not Conservatives. Meanwhile, the Tories are heading backwards all over southern England, losing hundreds of councillors in both Remain-voting and Leave-voting areas.

…and the Lib Dems have had a very good one

The Lib Dems have gained more than 300 councillors nationwide so far, winning a swathe of Tory heartland councils in the South. Most of these areas could now be in play at the general election.

Notably, the Lib Dems have done far better against the Tories than against Labour. Ultra-Remain Cambridge saw Labour comfortably head off the Lib Dems. We don't yet know what is driving the Lib Dem vote against the Conservatives – it could be former tactical voters returning to the fold, defecting Conservative Remainers, or the restoration of the party as the None-Of-The-Above choice, allowing them to ride an anti-politics wave. Each explanation has different implications for national politics.

I wrote after the local elections last year that the Tories were "about to get complacent". They ignored that a Leave-voting seat gained counts no more than a Remain-voting seat lost. Now the Leave-voting seats are drying up and even heading away from them. Their fantasy Brexit has failed, their leader is unpopular, their party split and out of ideas.

The Tories' only overall majority in the last quarter of a century came from charging through Lib Dem heartlands in southern England in 2015 to scrape over the line. The Conservatives have since been virtually wiped out from Britain's major cities, they are hated by younger voters, they have failed to make decisive headway in working class Leave areas, and now the Lib Dems are back.

More than three decades since the Tories won their last viable parliamentary majority, do they have any idea where the next will come from?

Nine years into a shambolic, divided Tory government, and Labour are losing seats. This is a wretched position for the party to be in – every other opposition party, plus a truckload of independents, are gaining while Her Majesty's Opposition somehow contrives to go backwards. 2017 showed that a lot can change during a general election campaign, but these results are well short of expectations given that – unlike in Labour's disastrous 2017 local elections – the ruling party and prime minister are hugely unpopular.

The one bright spot for the party is that their vote is holding up in their city strongholds. There's little evidence so far of a Remainer backlash among metropolitan voters against the party's Brexit prevarications – although one may emerge later this month at the European elections.

We don't know what the Greens mean

Well, we do know what the Greens mean, because they don't generally beat about the bush. But why have the Greens had such a good night in so many areas? We don't yet know – they could be attracting Remain voters, or they could be attracting None-Of-The-Above votes in an anti-politics swing. But bear in mind that in many council wards, the Greens won't even have been on the ballot. This makes their gains even more impressive.

Speaking of not on the ballot…

The elephant in the room is Nigel Farage. Whether this is a protest vote by Brexiters or a broader anti-politics vote, the Brexit party could profit either way. Farage remains personally unpopular, but if two-party politics continues to fracture, that may not be such an obstacle under First-Past-The-Post. The Brexit Party was not running yesterday. No-one would bet against it running in the local elections next year.

The prospects for Change UK are less rosy. The Lib Dems and Greens have stolen their clothes. They now have to answer exactly what they are for.

The party may still have a future as a refuge for large numbers of restive Labour MPs appalled at Corbyn's leadership. From further large scale defections, a viable party could emerge. But their decision-making would need to be transformatively better than it has been in recent weeks.

We don't know what this means for Brexit

Labour will, as ever, interpret these results as a mandate for a Brexit deal . They are losing in Leave voting seats but not Remain voting ones. They will once again decide that Remain voters have stayed loyal and can be taken for granted.

But until we know what motivated which voters where – was it Brexit, housing Nimbyism, anti-politics, or something else entirely? – we can't draw firm conclusions. But even if Labour does command the ongoing loyalty of Remain voters, its overall support is so low that its best route to power is via Tory unpopularity. That Tory unpopularity might well go into reverse if Theresa May is able to tie-up a Hard Brexit deal with Labour support. That would threaten Labour's chances of power. We can only assume they've noticed.

This all feels very unstable

The rise of independents, separatists, None-Of-The-Aboves and the Brexit Party are all signs of a political ecosystem at risk of imminent mass flooding. Neither main party seems able to stitch together anything but reluctant support from a dwindling band of loyalists. Whoever wins the next election looks like they'll do so by losing less badly than their opponents.

How old will we all be when Britain next has a viable government? And by then, what exactly will Britain be?