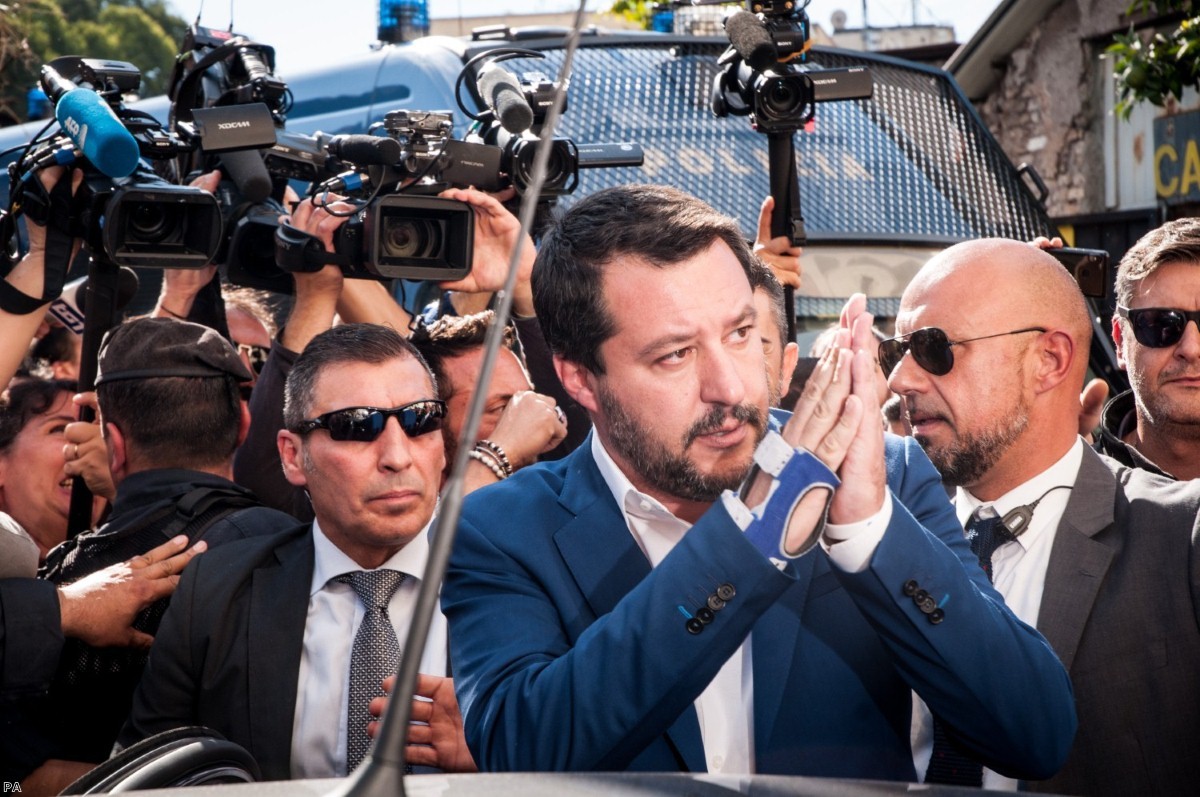 When academics write for a wider audience, as political scientists Roger Eatwell and Matthew Goodwin do in their much-trailed National Populism: The Revolt Against Liberal Democracy, it is not unusual for us to simplify our arguments and express our personal opinions. But there's a difference between simplified and simplistic. And there's also a difference between expressing your opinion and hiding your sympathy for your subjects – right-wing populist voters and politicians – in exaggerated statements about political trends which you then present as social-scientific fact.

National Populism promises to explain the appeal of new right-wing leaders and movements like Donald Trump, Brexit, Marine Le Pen and Matteo Salvini. It even offers advice to liberals and social democrats on how to respond, which – predictably – is to become more like them. There is undoubtedly some useful information and the authors are correct to point out that opponents of right-wing populists need better answers, but it is quite clear what this book is. It is part of a project to normalise and detoxify the new right.

Eatwell and Goodwin first aim to colonise the terminology. The new right's ideas do not simply reproduce a classical fascist agenda. Instead, the authors say, 'national populism' is "an ideology which prioritises the culture and interests of the nation, and which promises to give voice to a people who feel they have been neglected, even held in contempt, by distant and often corrupt elites". But there is really nothing in that sentence which does not apply to fascism. Actually, they'd have been on stronger ground if they kept to those elements of fascist methodology, like brutal paramilitarism and dictatorial rule, which contemporary populists have not so far reproduced, although, to be fair, the election of Jair Bolsonaro in Brazil this week shows they are spreading into even these extreme areas.

Eatwell and Goodwin also dismiss the term "far right" because it amalgamates the new movements with the anti-democratic "extreme right", "violent fascists" and "blatant racists". They do the same with the phrase "populist nationalism", because civic nationalists like the Scottish National Party may also be populist. Although they refer to Bernie Sanders, Jeremy Corbyn and Podemos as "left-wing populists" they cannot bring themselves to define Trump et al as "right-wing populists". Instead they use the benign and legitimating adjective "national".

It is not, of course, that our authors deny that these movements are right-wing, or that they sometimes involve extremism and racism. Theirs is a more subtle denial: they emphasise that their right-wing ideas are qualified by borrowings from left-wing economic thinking and that their racism is variable and not something which defines them. It is merely something which "some" national populists "veer into".

Anti-semitism is found to be mainly a problem of East European national populism, Trump "does not fit the systematically racist mould”, and Nigel Farage "took to the stage flanked by ethnic-minority supporters to proclaim that his party 'was not racist'." It's quite extraordinary that the authors took this stunt at face value. Goodwin in particular should have re-read his co-authored book about Ukip, Revolt on the Right, which found that "such efforts are continually hampered by the less than welcoming views held by many Ukip members and voters".

One of Eatwell and Goodwin's key moves is to define 'racism' so narrowly that the populists mostly escape. It should be confined, they say, "to the erroneous and dangerous belief that the world is divided into hierarchically ordered races, to anti-Semitism which plays more on conspiracy theory, and to violence and aggressive attitudes towards others based on their ethnicity". But that's it. "Where the disparagement and fear of different cultural groups is not linked to this form of systematic thinking" they prefer the term 'xenophobia'.

No serious survey would conclude that "systematic thinking" defines racism. The elaborate, pseudo-scientific hierarchies of Nazism and apartheid are outliers in the history of generally more ad-hoc, inconsistent prejudices and discriminations. That's been the case throughout modern history, but it is particularly the case now that what the authors call "blatant racism" has been delegitimised.

A more coherent definition is that racism is constituted of ideas and practices which express hostility towards population groups, however these groups are defined by perpetrators. Xenophobia, for example against Mexicans or East Europeans, is no less a form of hostility than colour prejudice and anti-semitism and often part of the same toxic mix. In reality, racism is generally pragmatic rather than intellectually coherent. It easily tolerates one out-group while attacking another, especially when it operates in a democratic political environment. When you have such a narrow definition of it, it is unsurprising that you cannot identify it when you stares you in the face.

A quarter to a third of British people consistently admit to the British Social Attitudes survey to being either "very" or "a little" racially prejudiced, and there are more who don't admit it. This ordinary and everyday racism, and how it impacts ideas about immigration, is what the new populists aim to politicise. Of course, to win majorities, as in the Brexit vote, they have to appeal to people who don't see themselves as prejudiced, and present immigration concerns partly in deracialised, numerical terms.

The central belief of this book is that populist voters have 'legitimate concerns'.

"Immigration and hyper ethnic change are cultivating strong fears about the possible destruction of the national group's historic identity and established ways of life. These fears are wrapped up in a belief that culturally liberal politicians, transnational organisations and global finance are eroding the nation by encouraging further mass immigration, while 'politically correct' agendas seek to silence any opposition." [Emphasis in original text]

Note the hyperbole. Ethnic change is "hyper" and people fear the "destruction" of their national group's identity and way of life. Their fears apparently arrive – strangely "wrapped" in classic fascist/populist tropes – as direct results of immigration and ethnic change. In reality they are endlessly mediated by politicians and the tabloid press.

The idea of group "destruction" – which is used to define genocide – is deployed to ratchet up the case. It is particularly shocking. The evidence Eatwell and Goodwin present shows people actually agree with much more moderate statements like "immigration is causing my country to change in ways I don’t like" or disagree that it "strengthens" the country.

Indeed the authors appear to have opted for "destruction" so that they could use the presentational device of '4 Ds' (the others are 'distrust', 'deprivation' and 'de-alignment') to explain populist appeal. So in order to suit a presentational device, they crudely distort the fears and anxieties of the very people they claim we should be listening to. Just as populist politicians have votes to win, populist academics have a book to sell.

We are constantly told that fears about immigration are legitimate, but nowhere do Eatwell and Goodwin explain why this is so. Not for them the complexities of migration and integration, although after 281 pages, they finally admit that "many of these fears are exaggerated". Nevertheless they insist "we need to appreciate how people feel".

Persistent references to voters' supposed views actually serve to protect the practitioners of anti-immigration politics. Populism is not primarily a popular mood, but a type of politics practised by unscrupulous political entrepreneurs. In a rare moment of self-reflection, Eatwell and Goodwin admit that "much of our focus has been on the key 'bottom-up' trends, or what scholars call the demand side… Critics might argue that we have not looked enough at the 'supply side', at how national populists themselves tap into these currents".

We might indeed. No one could doubt that anti-immigrant thinking of various kinds is deeply rooted in Western societies, but concern about immigration waxes and wanes not just with the level of immigration, but with the attention of anti-immigrant forces. It is striking that its salience has diminished in the UK since 2016.

Eatwell and Goodwin are right to say that populism's rise represents deep, long-term trends of distrust of political elites, relative deprivation – although, unlike them, we shouldn't understand this mainly in racial terms – and de-alignment from centrist parties, as well as concerns about immigration. They are also right to say that these factors are not going away.

What is not so clear is how racist-nationalist populism will mutate. Our authors claim that despite general electoral flux, "supporters of national populism have been surprisingly loyal to the movement", even though voting studies show huge volatility in individual support, partly masked by overall trends. If two-thirds of Brexit voters had supported Ukip (a figure I owe to Goodwin), most lent it occasional support in one election while voting for other parties on other occasions. And now, of course, the party has been largely eclipsed by a Brexitised Conservative party.

Eatwell and Goodwin call this a success for "national populism lite" in mainstream parties. But in truth, the racist-nationalist populist wave is as much or more about conservative parties like the Republicans, Tories, Fidesz, and the Brazilian Social Liberal Party radicalising as it is about insurgent movements like Ukip or the Front National in France. Whether they can de-radicalise is an interesting question, as is whether this threatens democracy itself or just its liberal form.

The one thing this book is right about is that liberals and social democrats have their work cut out to develop an adequate response.

Martin Shaw is a political sociologist and international relations scholar who writes on racism and genocide, and is currently linked to Roehampton University and the Institut Barcelona d’Estudis Internacionals. His site is martinshaw.org and you can follow him on Twitter here.