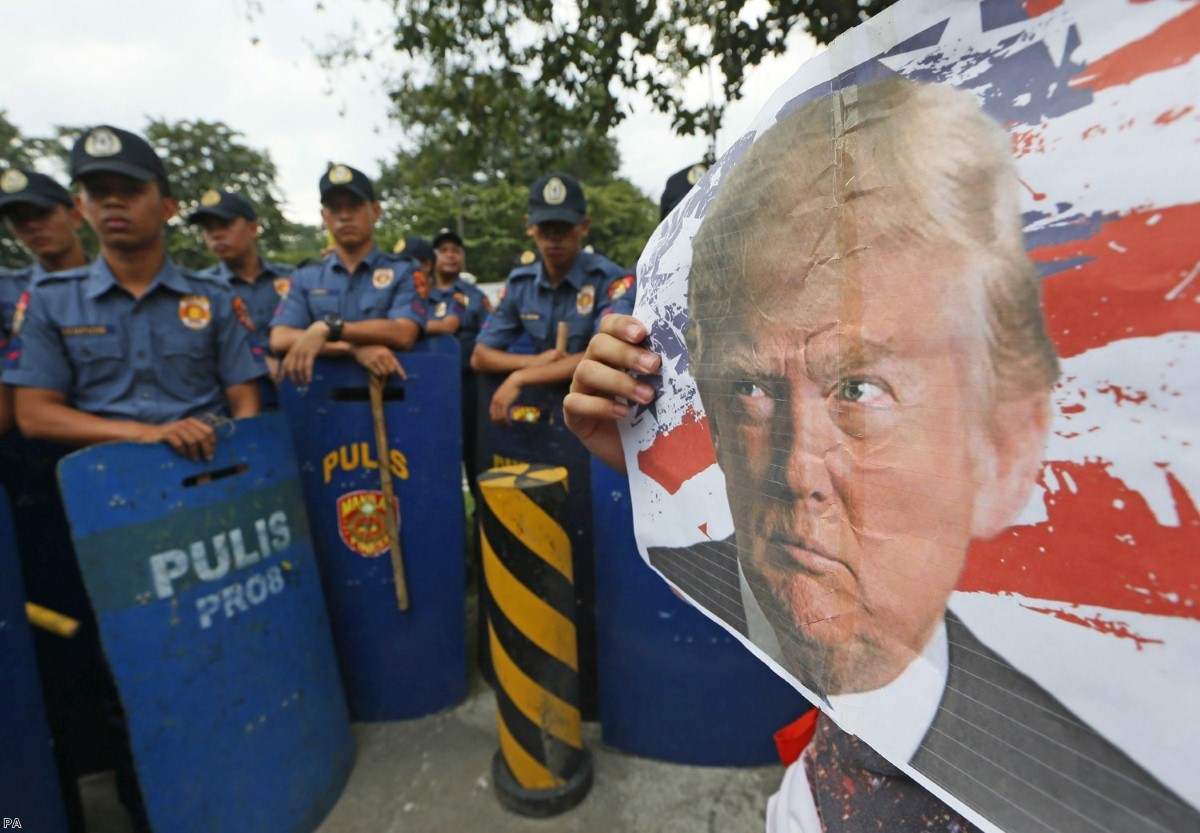 Having overcome the hurdles of needing to win an election, President Trump will have few formal checks standing in the way of wreaking havoc upon the world. Though the President faces numerous checks and balances over domestic policy, he has a much freer hand on foreign policy, thanks to Article two of the Constitution. When he’s sat in the Situation Room and tasked with responding to an emerging threat, there is no need to call Congress first for a vote before launching a missile.

So what could Trump do differently? Let’s start with the inevitable unwinding of the Obama Legacy.

Trump has promised to rip-up the Paris climate change agreement, destroying perhaps the only substantive opportunity the world has of mitigating the impact of climate change. He's also said he'll dump the Iran Deal, which has removed the threat of Iran developing nuclear weapons. No doubt the Iranian government is already figuring out how to reassemble its nuclear programme following Trump’s election. Trump could also end the rapprochement with Cuba, which Obama initiated after 50 years of sanctions failed to oust the Castro regime.

What makes it particularly easy for Trump to abandon all of these agreements is that they have been mostly carried out through executive orders rather than through legislation – thanks in part to Republican intransigence in the legislature. While this made it easier for Obama to strike the deals, it also makes it easier for Trump to tear them up.

All of these actions will no doubt increase global instability, and re-open cans of worms that Obama had attempted to nail shut. But what is truly frightening is that if Trump makes good on his campaign promises, his election signals the end of the institutions and the destruction of the western alliance that has maintained American and European stability since the end of the Second World War.

Take NATO. Trump has already implied that he won’t necessarily come to the automatic defence of a member country if is attacked. This is the entire point of NATO and Article five of its charter is what has so far dissuaded Putin from invading any of the Baltic states. Though NATO is an alliance of 28 countries, America is by far the largest contributor. Without America, NATO is dead and there are instantly fewer checks against Russian aggression.

Similarly, a successful European Union has always been viewed by America as crucial to European security. Though America is obviously not part of the bloc, it has been the policy of both Democrat and Republican Presidents to urge greater cooperation between European powers. Trump, meanwhile, has literally styled himself as “Mr Brexit”.

American power doesn’t just extend to Europe. In East Asia, American power underwrites the security of South Korea, Japan and Taiwan. Today, these countries are free democracies, and yet Trump said during the campaign that he wouldn’t necessarily honour existing defence agreements. He even suggested that they should develop their own nuclear weapons.

America has had a similar long term relationship with Saudi Arabia – a much more awkward case because it is governed by a hideous absolute monarchy which doesn’t even pretend to acknowledge human rights. But here Trump ignores the realpolitik sucking of teeth and has instead previously suggested that Saudi should develop nukes too.

Then finally there is Trump’s downright weird relationship with Russia. There’s already suggestions that the self-styled dealmaker could, for example, offer to recognise the legitimacy of Russian claims to Crimea in exchange for Putin doing the legwork taking care of ISIS. Though Trump hasn’t yet taken the oath of office, there are already ominous signs that Russia is set to get more assertive following his win.

The End of American Hegemony?

Simply put, 2016 could go down as being as pivotal to world history as 1815, 1945, or 1989 once were. If Trump follows through, then he will profoundly change the existing world order. Russia will be empowered, America will take a backseat.

The relative benefits of American hegemony are actually best articulated by none other than Hillary Clinton, who in her 2014 memoir Hard Choices said:

“I believe our own prosperity depends on having partners to trade with and that our fortunes are inextricably linked to those of the rest of the world. And I am convinced that, as long as the competition is fair, the more people around the world who leave poverty and join the middle class, the better it will be for America”.

In other words, American power is about the establishment of rules and norms that underpin fairness and stability. This sharply contrasts with the Russian (and indeed, Trumpian) view of the world as a zero-sum game where there can be no winners, without losers.

Don’t get me wrong – there are many strong and justified critiques of American foreign policy, globalisation and of the neoliberal world order (and as someone who came of age in the punk scene, it pains me to defend it). But I would much rather have liberal, democratic America running the table than either the corrupt regime of Russia or autocratic China.

Why does this matter? This isn’t simply a parlour game about who gets to sit in the big chair at the top of the international table. The rules and norms of the international system are the reason we have the relative peace and prosperity we have today. The global economy is only able to function because these rules and norms have created a degree of predictability – which in turn leads to a sense of stability.

An unpredictable President Trump threatens to throw this entire order into chaos.

I admit I am painting a fairly apocalyptic picture. This is very much the worst case scenario – but it is hardly a wildly unlikely one. Given that Trump does not seem to think deeply about, or really even understand the basics of America’s nuclear defences, he could change his mind when in office. He could pivot and make up policy on the fly. There are already some signs that he might do this – as President-Elect he has reneged on his earlier comments about South Korea and apparently confirmed to President Park that his administration will honour its defence commitments.

But this is more demonstrative of the fundamental problem: Unlike the existing norms and rules that characterise the international system and American power, Trump is unpredictable. It is precisely this unpredictability which threatens to bring down the existing global system.

Now that Trump is heading to the White House, there are few formal mechanisms to check his ability to dictate foreign policy. Perhaps the best hope we have is that the people involved in America’s diplomatic, defence and security apparatus are willing to stand up or push back against his most lunatic impulses. The good news is that though the management changes, America’s levers of power – the Pentagon and so on – endure, and carry with them their own bureaucratic and institutional weight, and all the status quo bias that comes with it.

We may also get lucky with the team that surrounds Trump. He himself has said he’ll get the “best people” to advise him on what to do. And in a slightly disturbing twist, I find it strangely comforting that so far some of his rumoured appointments have consisted of Wall Street executives and former Bush Administration hacks. Rumoured Secretary of State John Bolton, who was previously Bush’s Ambassador to the UN, might be an ultra-right wing neoconservative, but at least he is predictable and a known quantity. If he packs out his administration with these sorts of Washington elites (so much for draining the swamp!), then we’re still in for four horrible years – but it would at least look something more like the Bush administration than the random number generator administration that his campaign promised.

Of course this is all conjecture and the only certainty we have is that the future is now deeply uncertain. Right now, I’m not sure the world really appreciates quite what a grave a threat that really is.