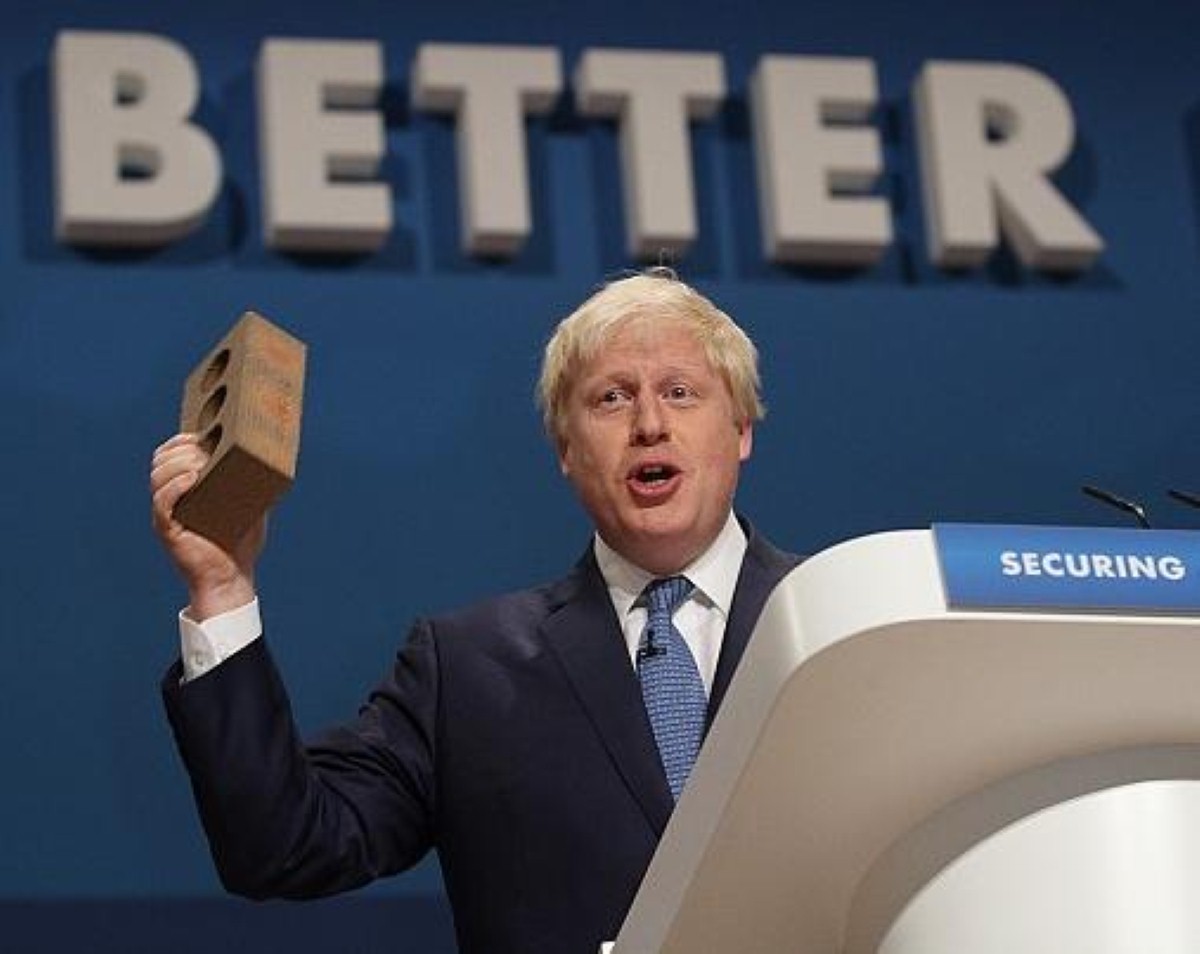 Boris Johnson's buffoonery finally met its match at the Conservative party conference this year. It turns out waving a brick around and cracking jokes is no match for a hardline approach against extremism.

For many years the mayor of London has been the centrepiece of Tuesdays at the Tories' annual autumn gathering. He is such an extraordinary specimen the delegates flock into the conference hall to hear his usual brand of flamboyant verbosity (it's catching).

They are yet to be disappointed. Johnson put forward his usual colourful mixture of imagery, the kind of language that most grey-suited politicians simply wish they could conjure. Who else could include a "thundering hangover" in a Las Vegas bus stop, cite Engels and One Direction, imagine Ed Miliband being able to "osmotically inveigle himself into power", brandish a brick and extol the virtues of exporting chilli to India for crowd control in a single address? Boris is a formidable performer.

And yet this was not the barnstorming performance of previous years. It was not a laugh-a-minute, even though there were still plenty of jokes. The tone was diluted. It may have been deliberate, as part of a grand masterplan to become more prime ministerial.

Or it may just have been an off-day. This seems more plausible. Boris fumbled around his words a little more than usual, and he worked harder than usual trying to explain the Tories' defining values. Perhaps he should have gone further, exploring this theme more. As it was, he saved his most serious point for David Cameron. "That's the man who's going to lead the country into 2015 (no pause) and beyond!"

Afterwards, Tory activists seemed impressed, but were not burbling with enthusiasm. Instead they talked of his ability to address serious points as well. Boris is viewed as a man capable of grasping the largest political portfolio of all, but as his speech showed he still has some work to do to convince dispassionate observers. On skills, for example, he turned to Cameron for support. "Three million apprenticeships?" he asked, peering out to where his party leader was sat a few rows back. "I'm getting a nod from the prime minister."

Boris' speech couldn't have contrasted more with the one directly before it. Normally his outlandish style of delivery trumps everything else on the stage, but the sheer weight of Theresa May's tone for once saw off Boris' banter. If you can, put aside the nature of the changes she's proposing. Focus instead on their impact in the minds of Tory party members. Through the lens of future Conservative leadership contenders, it's clear this was a speech that really mattered.

May's anti-extremism agenda, which fleshed out David Cameron's announcements in the morning, made this the closest thing we'll see to a leader's speech this week that doesn't come out of the prime minister's mouth. When she declared that "Isil must be destroyed" she had all the foreign policy fervency of Tony Blair. When she referenced the Trojan Horse plot in Birmingham's schools, she would have trod on Michael Gove's turf – were it not for the fact he had lost his job as education secretary. When she spoke of the need to "protect the public", she made clear the task was her personal duty, her ultimate priority.

Such a solemn priority requires sacrifices, but the balance between civil liberties and state security wasn't even mentioned. This was strange, as her proposals will prove controversial. They include reviving the snoopers' charter and clamping down on extremism even when those committing it "stay within the law".

By omitting all this, May was suggesting the urgency of the case was so vital any minor worries about free speech need not concern anyone. But the issue clearly played on her mind because of the way she was introduced. May was preceded on stage by a young black student from south-east London, who is now at Warwick University, called Alexander Paul. He was an impressive chap and spoke passionately about the downsides of stop-and-search. He asked the Tory audience how many of them were law-abiding citizens, and everyone put up their hand. Then he asked the Tory audience how many of them had been stopped and searched. Not many were, but he told them it had happened to him 20 times.

Point made. May, who Paul praised for having reformed stop and search, used this at the start of her speech to paint herself as a moderate reformer. It was a warm-up for the barrage of anti-extremism measures which followed. These will make the country safer, certainly. They were delivered with such quietly determined panache they make May a more likely future Tory leader than ever. And they will hit civil liberties, too. No-one in Birmingham could care less.