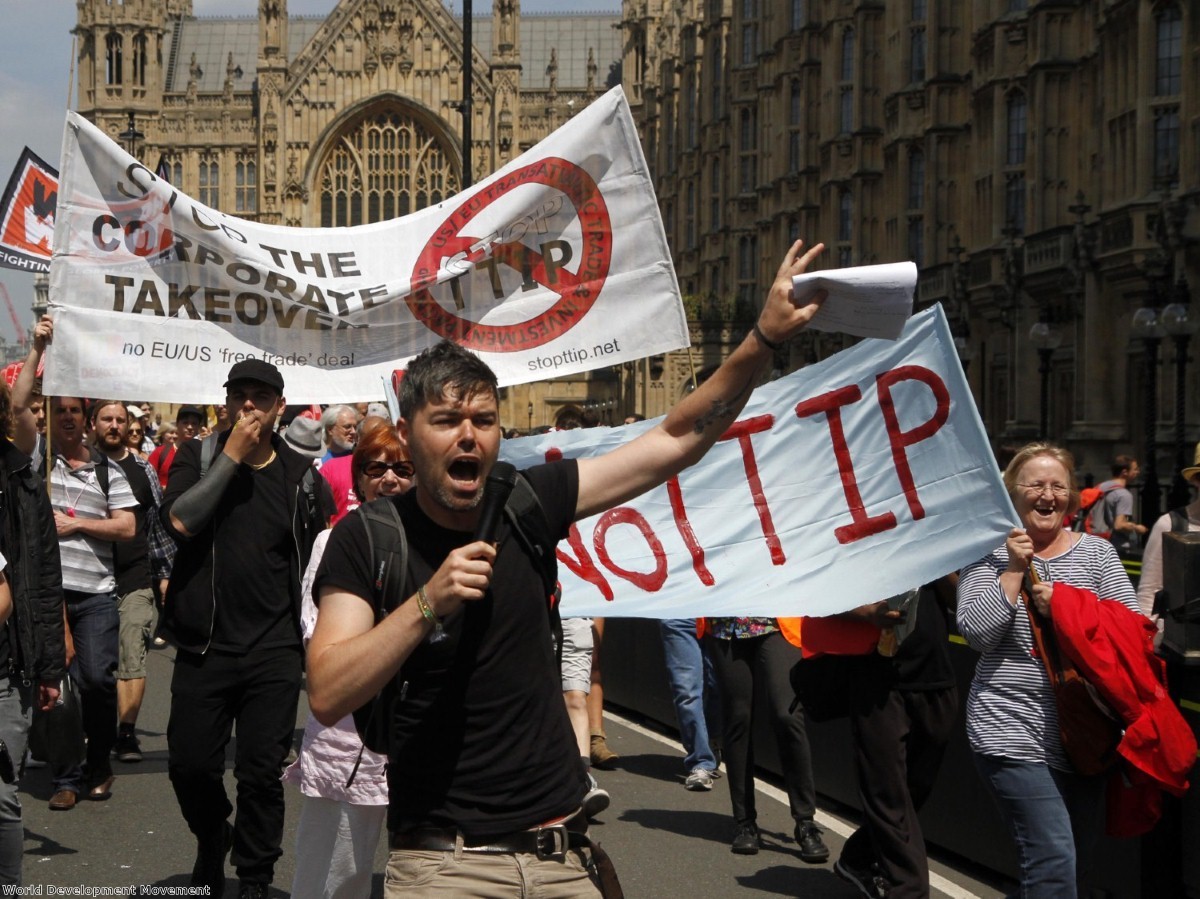 There is something rotten in the state of Europe when an unelected, unaccountable EU body can glibly inform millions of us that we no longer have the right to question its most dangerous and unpopular policies.

This is exactly what has just happened, as the European Commission has announced that it will not allow a European Citizens' Initiative (ECI) to challenge the secret trade talks it is holding with the US government, supposedly on our behalf.

The ruling is a slap in the face for the 230 civil society organisations from across Europe that have lined up behind the initiative, and the millions of European citizens they represent. The ECI is the only vehicle available to us to challenge the shadowy bureaucrats of the European Commission. Now even this seems to be too much scrutiny for them.

The negotiations on the Transatlantic Trade and Investment Partnership (TTIP) have become one of the hottest political topics across Europe. TTIP is effectively a new bill of rights for multinational corporations, granting them unprecedented powers and undermining vital labour, environmental and food safety standards in the name of 'free' trade.

TTIP is also a direct threat to our democracy, as the European Commission seeks to allow companies to challenge future policies introduced anywhere in Europe that could jeopardise their bottom line. The ECI, by contrast, was a fully democratic response. And the Commission has blocked it.

There are already huge movements of opposition to TTIP in most European countries. Trade unions and global justice groups have joined forces with environmental, consumer and digital privacy campaigners to confront the common threat that the negotiations pose.

The European Commission is well aware of the strength of this resistance, as it has been forced to suspend negotiations on one of the most controversial aspects of the agreement: the new ‘investor-state dispute settlement’ powers that companies will win through TTIP to sue host states when their profits come under threat.

That mechanism has been questioned by the German and French governments, as it effectively raises transnational capital to the status of the nation state itself. The new powers are already being used elsewhere under other treaties, as in the billion-dollar challenge being brought by Philip Morris against the Australian government for loss of profits as a result of the country's public health requirement that all cigarettes be sold in plain packaging.

Under similar provisions in the Energy Charter Treaty, the Swedish energy company Vattenfall is suing Germany for €3.7 billion (£2.94 billion) over its decision to phase out nuclear power in the wake of the Fukushima disaster. French company Veolia is even suing the Egyptian government for threatening its profits by raising the minimum wage. And there are countless other equally shocking examples stretching back over the past 20 years.

As always, the UK government is a major part of the problem. Leaked documents from internal EU discussions over the parallel EU-Canada trade talks (CETA) reveal that the UK is the only member state providing unconditional support for the European Commission in its desire to introduce these new powers for business, at the expense of democracy and the rule of law.

Yet just this week, the British trade union movement came out in full opposition to the introduction of all investor-state dispute settlement mechanisms in EU trade deals, with a unanimous vote to stop the EU-US talks in their tracks.

Not only is TTIP predicted to cost at least one million jobs between the EU and USA, but it will also make it impossible for any future government to repeal the Health & Social Care Act and bring the NHS back into public hands.

I am one of the seven people who make up the European citizens' committee for the ECI against TTIP and CETA that the Commission has rejected. With fellow representatives from France, Germany, Finland, Romania, Luxembourg and Portugal, we were responsible for raising one million signatures in favour of the initiative within a year.

Given the massive opposition that exists to TTIP across Europe, we were confident of meeting the target well within the required time. The European Commission obviously thought the same, hence its decision to strangle the initiative at birth.

This is by no means the end of the story. We have legal advice to suggest that the European Commission is on thin ice in its attempt to prevent the ECI from going ahead, and we can take our appeal direct to the European Court of Justice in order to get the block lifted.

The fight against TTIP will continue regardless of whether we overcome the Commission's opposition to the ECI. But the Brussels bureaucrats need to be careful as to the long-term consequences of their contempt for democracy.

The European parliament elections this May saw an unprecedented surge in the number of voters rejecting the European project in its entirety. Ukip won more seats than any other UK party, the Front National topped the poll in France and some of our continent's nastiest far-right extremists now enjoy the legitimacy of EU parliamentary representation.

Jean-Claude Juncker, newly appointed as president of the European Commission, has been talking of his desire to see 'fairness and democracy' at the heart of Europe. He would do well to clean out his own stables first.

John Hilary is executive director of War on Want. His full briefing on TTIP published with the Rosa Luxemburg Foundation (and available in seven European languages) can be read here.