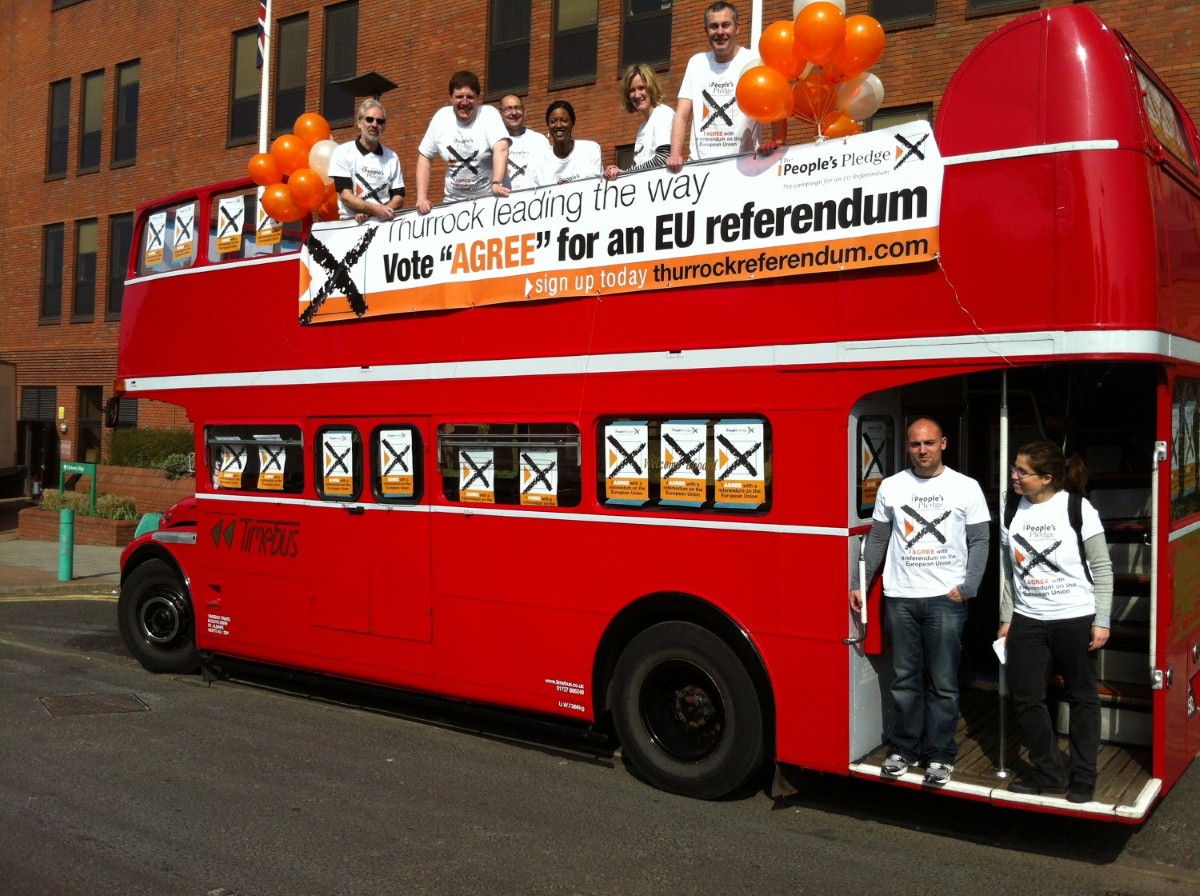 We now have the proof that the British people are yearning for a say on our membership of the European Union.

We now know the result – and it really is staggering. Nearly 15,000 people in Thurrock voted, on a turnout of over 30%, with nearly 90% voting “AGREE” to having a national referendum on our EU membership. This result exceeded even my hopeful expectations – crucially it also exceeded the expectations of many political insiders who felt the turnout on a poll held on the Thursday before Easter could be in the high single figures at best. Not only did the turnout exceed that of previous local government elections in the area, but the number voting AGREE for a referendum was only 3,000 shy of the total number of votes incumbent MP Jackie Doyle Price received at the last general election. The numbers speak for themselves.

The Westminster elite have been able to escape addressing the referendum question for many years by convincing themselves that opinions polls weren’t really comprehensive or representative, and certainly not relevant to their own constituents; it was an easy position to take. Who –or rather which MP- indeed cares if 80% of an 800 person-strong focus group sampled for a poll want a referendum. This is where the vote in Thurrock, along with the others we have planned in the future, can present a significant and less dismissible challenge. SW1 is already made up of too many thinkers and not enough doers. Invert that relationship and the turning circle of political change will be far shorter. The recent events in Bradford should be a wakeup call to political parties and representatives that relying on a national message only takes you so far. You have to take a risk and take the argument to the people, and as we saw in Thurrock, they might just agree with what you think.

The Pledge campaign on the ground now really kicks into gear, and up a notch. The more referendums we organise and carry out, the harder it will be for any detractors to dismiss our vote as a one off. The first wheel in the ratchet strategy has already been cranked and there really is no turning back. Some have wrongly stated that Thurrock is a very Eurosceptic seat. Wrong; it is no more Eurosceptic than a seat in Newcastle or Cornwall – or anywhere else for that matter. But to write off our result in Thurrock on this flawed basis is to say people voted for a referendum primarily because they are Eurosceptic – not so at all. On the doorstep, the most salient point that resonated with people and spurred them on to return the ballot paper was that their MP had the opportunity to give them a vote on EU membership in October, and that she denied them that opportunity. There is a crisis of our democracy where the big issues are comprehensively evaded. People are fed up with politicians and so disillusioned and distrustful that they already have a hard time believing what they say – particularly when it comes to the ‘question of Europe’. These results are not dependent on geography or demographics but are part of a deeper issue affecting the British public as a whole. They want to take control and have their own say – independent of politicians.

Those who accused the People’s Pledge of in some way conducting a less than impartial campaign in Thurrock are the same people that refused to debate at a 2,000 strong Congress at Westminster Hall on why they do not support a referendum. They play the man rather than the ball. The problem for them is that they are still playing the shadow of the man these campaigns used to represent. Right wing, Eurosceptic, little Englander, Conservative; every stereotype mould used to fit anyone who backs a referendum. But the movement has moved on. It’s pro-referendum now, pro-democracy, little European and crucially cross-party.

I recently saw a Twitter exchange between two squarely pro-EU people who are part of the ‘anti-plebiscite’ movement and, despite the fact it must kill them inside to have to admit it, some are beginning to realise that a referendum is inevitable. It’s not an ‘if’ but ‘when’ scenario now. The only debate I believe currently exists is what the question will be. We have moved on – they haven’t. Their position is impossible to defend – self-evidently as they refuse to defend it. When the likes of Keith Vaz MP and former MEP John Stevens – both vehemently in the pro-EU camp – and indeed our self-avowed ‘Europhile’ director Ian McKenzie support the campaign for reasons of democracy and legitimacy, it makes the personal obstinacy of the anti-referendum lobby even harder to defend. You could even call it undemocratic. The referendum in Thurrock captured the imagination of the voters not because it was geared to a latent sense of anti-Europeanism but because it empowered voters. The simple fact of the matter was that MP Jackie Doyle Price voted against having a referendum in October and her voters felt cheated. The turnout levels and the response to this vote was their expression of that.

After weeks of campaigning we tried to get Doyle Price and her already-selected Labour counterpart Polly Billington to a hustings event, with zero success, so one of my colleagues took the opportunity of talking to the MP when he chanced upon her on the train from Thurrock into London. She was unequivocal in her position, saying she would be “staying well out of the debate” and in her words “leaving Europe to Ukip and immigration to the BNP”. I’m not sure that on the issue of Europe absenting from the field of play is any longer a viable option – or even a vote winner. Saying nothing was once the way to progress politically and keeping your head down – the first step post-election. Not any longer. Constituents are tiring of professional politicians and want representatives who actually leave the fence to take an overt position and stick to it. Is it any coincidence that many MPs with large and, crucially, increased majorities are often those that you would call independently minded?

There are a number of other reasons why the results in Thurrock are so interesting, including the fact that three weeks before polling day local Labour councillors voted to endorse the referendum campaign. Either they are longstanding proponents of an EU referendum (some clearly were) or they have realised there exists a vacuum – as a result of Cameron and the Conservative party’s intransigence on a referendum – where monumental political capital is up for grabs if Labour were to come out backing one first, as they did under Harold Wilson in 1974. Either way, it appears these councillors grasped what Ed Milliband has yet to comprehend (or refused to act on). Perhaps he may be reticent to throw his lot behind an in/out EU referendum and I’m sure he thinks he has other issues where he can score significant capital, but from the outside it appears this is Miliband’s biggest – and perhaps only real – weapon against Cameron. The EU question is without doubt the prime minister’s Achilles heel, and for as long as MPs like Jackie Doyle Price follow the Number 10 line that absenting themselves from any meaningful debate is the best method of self-preservation, that is all that will happen. The problem for Cameron is that the Labour party is starting to awaken to this, be it through the urgings of the Labour blogosphere or from backbench representations. Unless he makes the first move he risks being outflanked. The fact that Europe dominated a recent shadow Cabinet meeting shows that Labour is on partial maneuvers.

Yet through all of this, what must be remembered is that the aim of the People’s Pledge and our ground strategy is not to threaten MPs. Far from it; it is to give them a following wind of five figure support so when an EU referendum vote happens again in parliament – and it will – they can defy their whips knowing they have the all-important support of their constituents. The People’s Pledge will hold a further ten referendums this year and another 100 in 2013. By then I think the landscape will feel very different for all concerned.

Christopher Bruni-Lowe, co-founder and campaign director of the People’s Pledge