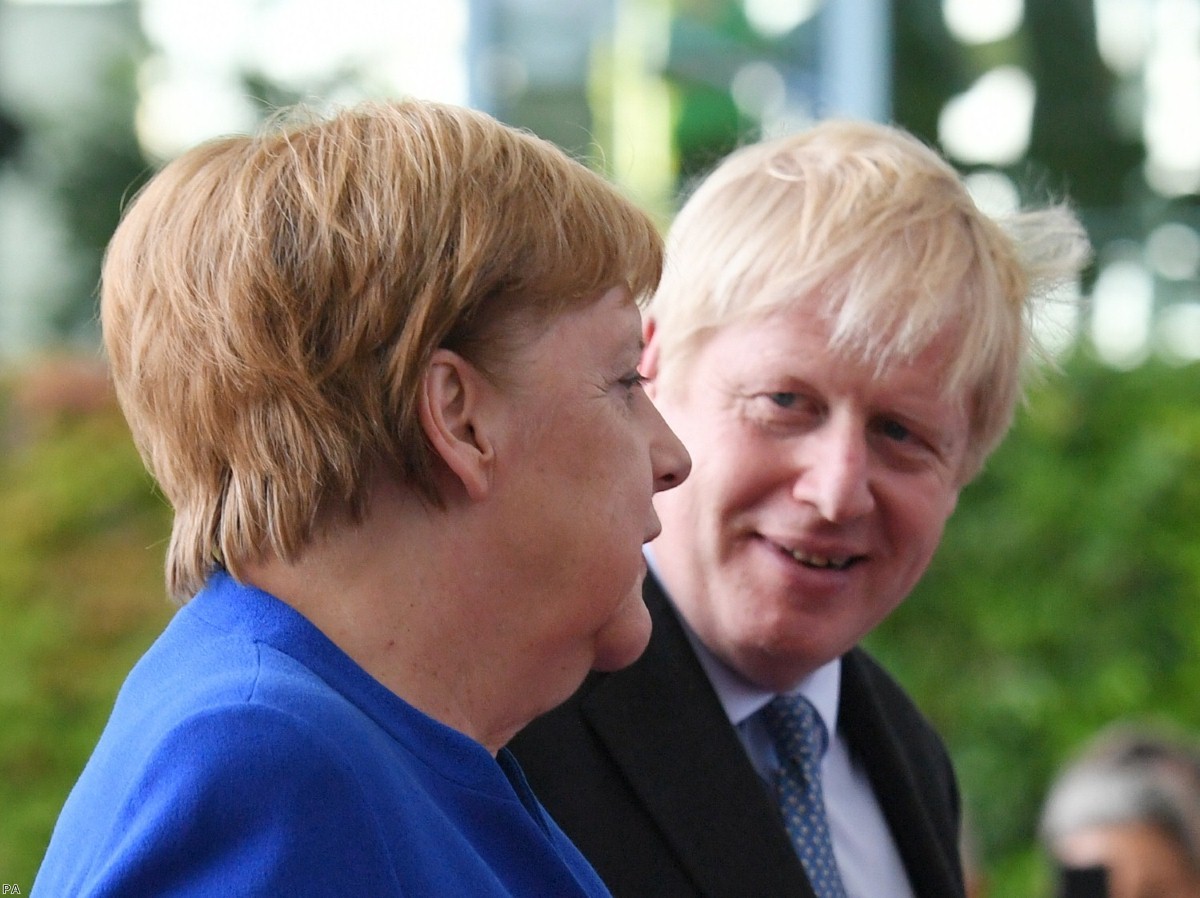 It's like being stuck in a clown car. No.10's statements on the Brexit talks are so childlike and patently self-interested that you would have to actively close down your intellectual capacities to take them seriously. And yet that apparently is now the standard approach of much of the British political class.

This morning, No.10 put out an assessment of a phone call between prime minister Boris Johnson and Angela Merkel. The German chancellor has many faults, but on Brexit she is cautious, moderate and weighs her words carefully. So it was surprising to find out from No.10 that she said that "if Germany wanted to leave the EU they could do it no problem but the UK cannot leave without leaving Northern Ireland behind in a customs union and in full alignment forever".

Now seriously, whose words are these? Are they the words of a long-lasting, carefully spoken German chancellor with one of the most successful diplomatic track records in the Western world? Or are they the words of No.10's gibbering, inane PR operation?

Let's go with the latter as the more plausible answer. As if to clarify, the statement insisted "the EU has adopted a new position" and now "a deal is essentially impossible not just now but ever".

This comment tells us nothing about Merkel or the German or EU negotiating position. It tells us everything about Downing Street's PR sequencing, the parallel-world narrative they are building up, next to the actual objectively-existing world, in which they plan to fight a general election. And we don't really need to infer that. It was stated outright by Dominic Cummings in a lengthy message to the Spectator last night.

"We'll either leave with no deal on 31 October or there will be an election and then we will leave with no deal," he told the magazine. The DUP jumped in this morning, closely following the script. "The comments from the German chancellor reveal the real objective of Dublin and the European Union," leader Arlene Foster said. "The EU is not interested in a negotiated outcome at this time. The true purpose of the 'backstop' is now in the open for all to see."

Let's break it down. The EU has not adopted a new position. The position of both the British government and the EU throughout has been that there can be no hard border in Ireland. The Brexiters said this could be done via customs and regulatory technology which does not exist. Under Theresa May that meant the backstop. This included the opportunity to test out their technological solutions. If they failed, then the insurance policy of the backstop came into force.

Under Johnson, the nonsense about these technological solutions fell away. His plans showed that there would be checks in Ireland. The EU was asked to accept this, which it would not and could not. It's position has in fact stayed unchanged throughout. It is the British government which has changed position, first of all by accepting a backstop, then pushing for it to encompass all the UK, then dedicating its resources to demand the negation of its own single negotiating success.

The statement about Northern Ireland staying in the customs union is just the harshest possible spin on a basic practical reality of Brexit, one which it is tiresome to repeat but which we must anyway or risk losing all contact with objective reality: Customs and regulatory checks exist between seperate customs and regulatory territories.

They entail checks at premises, or away from the border, or on the border, or more likely some combination of the three. Tech will get you some way towards minimising them, but the only way to elininate them completely is to align on regulations and stay in the same customs territory.

There's no new position – not on the EU side, or on the basis of the functioning of the world. Gravity still operates, rain still falls from the sky, nothing can travel faster than the speed of light. And these facts about customs and regulations still hold true as well.

What we are seeing is the next stage of the No.10 strategy. They put forward a deal they knew would not work. It breached pretty much every EU red line. It made no sense on its own terms. It betrayed the government's own commitments. It was undeliverable and untenable: the crumpled paper an out-of-control British government pulled out its mouth and handed to teacher.

The only reason it was provided at all was so Johnson could try to credible claim he attempted to negotiate with the EU. He probably figured it had a five per cent chance of success, so give it a go just in case. But its primary purpose was to create narrative. They were ever so reasonable. The EU are such dastardly villains. What else can a decent-minded Englishman do but pursue no-deal?

It is so painfully obvious. It's like watching Warner Bros cartoon characters orchestrate a raid on the Watergate hotel. So now the next part of the narrative takes over. No.10 will claim it will not extend Article 50. Then it'll have to extend. Then it'll blame parliament and the courts for undermining the will of the people. And then they'll go for election on a nakedly authoritarian nationalist programme.

No.10 is operating a parallel governance strategy. On the one hand is objective reality- customs checks, legislation, court verdicts. On the other is the narrative – sneaky Europeans, liberal elite saboteurs, heroic patriot prime ministers. The latter has no relationship to the former.

That requires a very particular kind of political coverage, one which recognises the strategy being pursued – not in a he-said-she-said way, but by evaluating statements from No.10 on the basis of that clear narrative and informing the public of the manner in which objective reality contradicts it. Anything else means the media is complicit in helping the government formulate and deliver that strategy.

This matters now more than ever, because we are clearly about to enter the next stage of the process, where they dress up the democratic scrutiny and legal constrictions of government as a conspiracy against the people. That's dangerous talk. It's some of the most venal and nakedly cynical nationalist propoganda possible. And unless it is treated with the vigorous interrogation it deserves, it will prove a toxic mix in the general election to come.