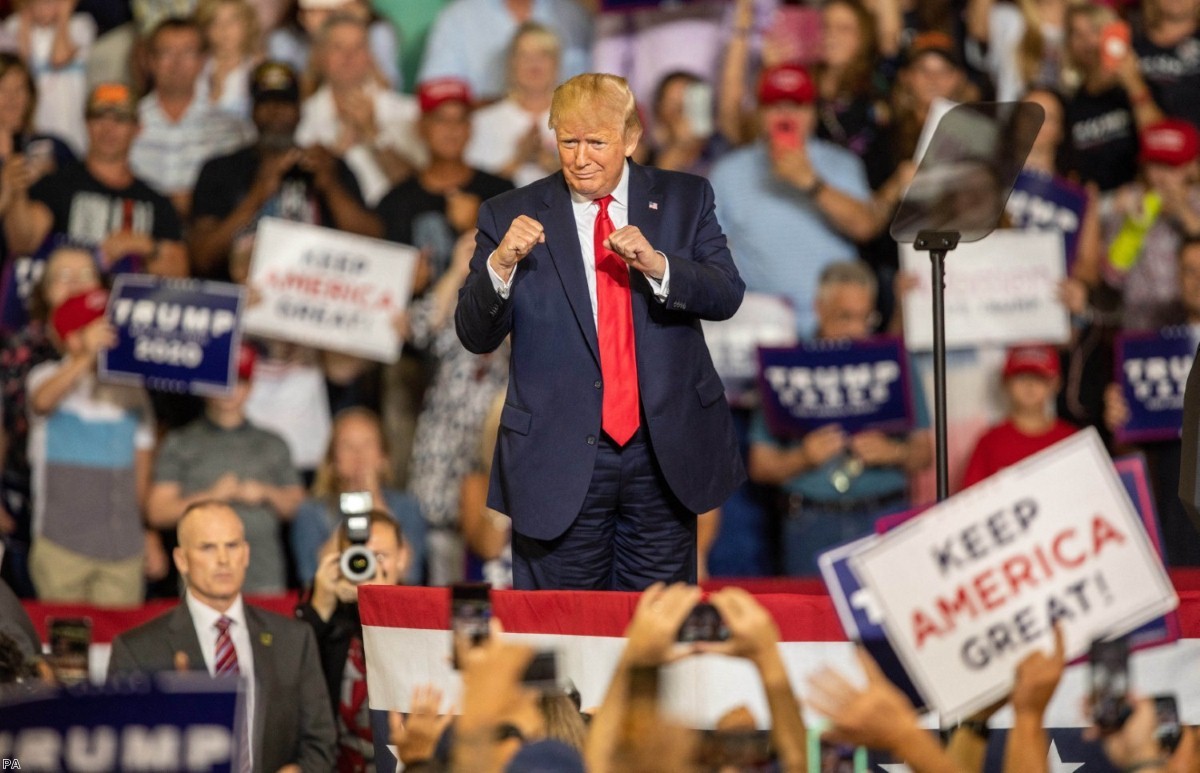 Week in Review: Something grim rises from Trump’s rally

Anytime someone mentions fascism, a Twitter expert pops up to insist they're not using it properly. If there was a Nazi takeover, they'd probably still be insisting it's not technically fascism while they were being beaten to death by stormtroopers. But it's clear what we saw this week. You could feel the echo. Something profoundly ugly stirred in America. And like always, we watched, disconcerted, hoping it wouldn't contaminate us over here.

The anti-immigrant chants filled the space at Donald Trump's rally this week, directed against Ilhan Omar, a Mulsim Democratic congresswoman and American citizen. The president paused to let them grow. 'Lock her up' has morphed into 'send her back'. And just like that, the US took another small but noticeable step downwards towards moral disintegration.

The argument on fascist definition is not particularly helpful. There is no fixed definition, because fascism was never a unified intellectual project. It never really meant anything coherent. It shifted and spasmed, trying to fit the available political space. Under early Mussolini it contained futurist intellectuals, syndicalist pro-war socialists and violent nationalists. By the time he reached power it had dropped any left-wing pretensions and become a thug enforcement militia for large landowners. Hitler's Nazi party also talked a good game of wanting to challenge global capitalism, but did nothing to change property arrangements in power, except for confiscating it from the groups it wanted to kill.

All the other major political ideologies come from the great intellectual traditions of the 18th and 19th Century – conservativism's Edmund Burke, liberalism's John Stuart Mill, socialism's Karl Marx. You could have put those three men in a room together and they would have had a conversation. Who is there for fascism? No-one. Who the hell was going to have a debate with Mussolini or Hitler? No-one, unless they wanted to get shot. It was pure anti-intellectualism. As one fascist militant from the 1920s said: "The fist is the synthesis of our theory."

That's why there is no fascist definition, because it is too lacking in substance to properly pin down. There's just a collection of instincts. Robert O.Paxton, in his brilliant Anatomy of Fascism, did his best to elaborate on them. They include an obsession with national decline, combined with a pronounced sense of victimhood, the blame for which is pinned on a designated minority, in which a party or group of activists demonstrate their purity and patriotism by rejecting standard democratic and liberal legal safeguards, in collaboration with a traditional elite.

There are plenty of things about Trump which don't satisfy this kind of assessment – there's no outward military expansion, no stormtroopers, no internal liquidation programme, and not enough intellectual capacity in the commander-in-chief to maintain even this very modest level of political thought.

But waiting for fascism is not about sitting at home with a checklist, contenting yourself that everything is fine until someone ticks every single box. It's about being vigilant about the type of political behaviour which leads to fascism.

We have seen more than enough of that in the US to know what we're dealing with. Minorities have come under attack. The minorities are always immigrants. Sometimes, as with Omar, they're Muslims. Trump tried to initiate a complete ban on their entry into the US. Sometimes they're Mexicans, who he branded "rapists".

The minority is subjected to dehumanising language and treatment. Last week video footage showed vice-president Mike Pence touring an immigration detention facility where men were kept in overcrowded pens like dogs. Children are separated from their parents.

Trump utilises the classic fascistic device of associating himself with the nation, then branding any criticism of him an attack on the country. This instantly delegitimises opponents as lacking in patriotism – a liberal fifth column. He also attacks international and domestic institutions, including the press, the judiciary, the WTO and Nato – a typical move of authoritarians trying to amass more power.

He doesn't need to be a fascist, or even cerebrally capable of understanding the word, to behave like one. And by behaving like one, something vicious and ugly stirs in a nation. When angry mobs ran through France in 1898 targeting Jewish shops, they had no formal leader, apart from a few aspirational antisemitic journalists and gangsters. But the hatred spasmed out, fuelled by made-up grievance and a relentless press narrative of national decline blamed on enemy minorities. It is not so difficult to imagine something similar in parts of America now, albeit with a different target of Muslims and perhaps Latinos.

In Britain we sit and watch, but we are not exempt. There is nothing as obscene as Trump here. For all the bile thrown around after the referendum, most Brexiters in parliament and the media were commendably clear that the rights of EU citizens should be guaranteed.

But actually the most influential figures in Brexit have been the least restrained. Nigel Farage posed in front of his godforsaken 'Breaking Point' poster. The official Vote Leave campaign put out leaflets whose inclusion of Syrian and Iraqi immigration had a clear racial implication. Theresa May condemned 'citizens of nowhere', branded EU citizens queue-jumpers and refused to guarantee their rights, effectively threatening them with mass deportation. Boris Johnson's repeated racial and religious slurs are well documented. The attacks on institutions – press, judiciary, parliament, EU – are the same and arguably even more pronounced.

This ugliness is here too. It is not so severe, nor as widespread, but it is quite possible to imagine it becoming so. We have no inbuilt national immunity to it and there are plenty of hard-right politicians, most notably Farage, who are desperately trying to follow the Trump playbook.

There's no point getting wrapped up in a tick-list approach to fascism. Look at that rally. You know what you're seeing. That's the thing to fight. If there's a single good reason to ever be into politics in the first place, it's to fight things like that.