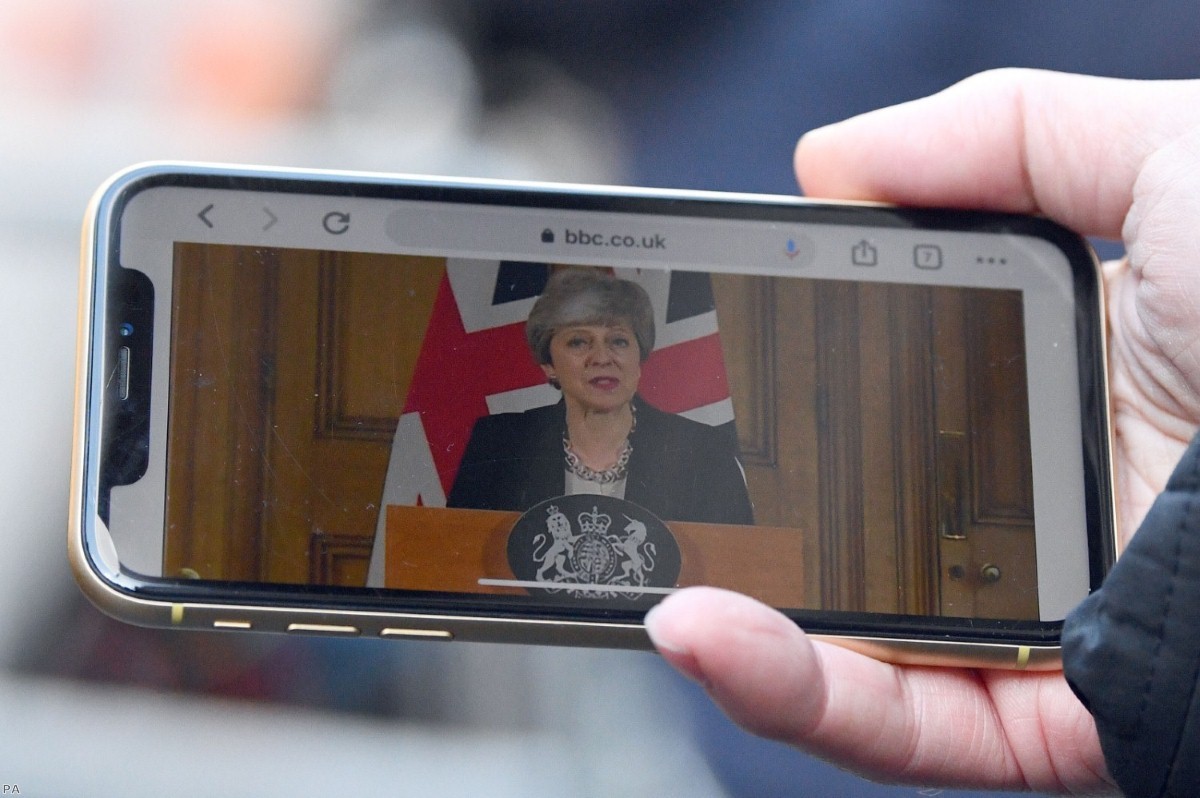 No.10 statement: Look out for Theresa May’s no-deal trap

It all sounded so reasonable and open. And that was probably the first indication that something could be wrong. Theresa May's statement in Downing Street today, just like all her Brexit commentary, was extremely murky and unclear. It sounded like one thing, but could entail something else entirely.

"Leaving with a deal is the best solution," she said, "so we will need a further extension of Article 50 – one that is as short as possible and which ends when we pass a deal."

That sounded positive. She said would go to the EU next week and request the extra time. It sounded a lot like she was ruling out no-deal.

And there was more. The prime minister seemed to have given up on getting the ERG and DUP onside, so instead she would reach out to Jeremy Corbyn and try to find a deal they could both agree on.

If they could find agreement on one proposal, they would bring it forward together. If not, they would lay out a series of proposals and have the Commons vote on them, as they had recently during the indicative votes process. "The government stands ready," she promised, "to abide by the decision of the House."

It all sounded so reasonable. A realistic timetable. Cross-party cooperation. It was like a whole new prime minister. But then came the dangerous part. She got to that bit in her statement where, if you were looking hard enough, you could see the tactical sleight of hand.

"The government would then bring forward the withdrawal agreement bill," she said, referring to the domestic legislation enacting the deal with Brussels. "We would want to agree a timetable for this bill to ensure it is passed before the 22nd of May, so the UK need not take part in European parliamentary elections."

And that's when the alarm bells started ringing. That is the bit that will define if this is a real attempt to turn the page on how she approaches Brexit or another cynical trap based on deception.

The European elections are a crucial moment in the Brexit process. The EU has been clear that if the UK does not take part in those elections, it cannot remain inside, because it would mean that the European parliament would potentially be illegally constituted. The danger was always that May would use this fact to pivot parliament into a place where it had to choose between her deal or no-deal.

The elections are on May 23rd. But the last date Britain can pass the domestic legislation to take part is April 12th. This creates a kind of danger zone, a time window in which May could put her deal to parliament in the knowledge that no further extensions of Article 50 were possible.

This is not paranoia. It is simply a description of her standard approach. Throughout Brexit she has tried to force MPs to choose between her deal and no-deal, because the only situation in which a specific Brexit deal would look attractive is if it was compared with the disaster of the cliff edge. At the start it was by denying parliamentarians a meaningful vote. Now it may be using trickery around the extension offer.

This was why the EU set two deadlines. One was for May 22nd, just before the elections were held, in the event the prime minister got her deal through and needed more time to pass legislation bringing it into effect. The other was for April 12th, when the UK would need to decide to take part in the elections. The expectation was that if no deal had been agreed by then, the British team would go Brussels, request a longer extension – probably to the end of the year – and propose some sort of process for figuring out how a deal might eventually be agreed. May is now playing around with those dates in an interesting way.

You have to pay very close attention to her speeches. She hides her strategy in the precise wording of the text.

Look at this sentence again:

"We would want to agree a timetable for this bill to ensure it is passed before the 22nd of May, so the UK need not take part in European parliamentary elections."

Sounds simple, but it isn't. It has two potential meanings and the difference between them could mean everything to Brexit endgame.

In the best case scenario, it means she will ask for a long extension, possibly to the end of the year, pass the domestic legislation to take part in the European elections by April 12th, and then try to get the deal through before May 22nd so we can leave before the election actually takes place. That would be fine. It would simply be a political ambition, rather than a legal trap.

There is some evidence she might intend this. De-facto deputy prime minister David Lidington yesterday wrote to the Electoral Commission instructing them to prepare for the election as a contingency measure.

But there is a worst case scenario too. She could be planning to only request an extension of Article 50 to May 22nd. This would take the EU's deal timetable offer and apply it to her no-deal circumstance. All the talk of working with Jeremy Corbyn and an indicative votes back-up mechanism would, in this interpretation, not really be meaningful. It would simply be there to convince the EU to extend their offer without the UK having to pass legislation to take part in the elections.

This strategy would be intended to get the UK into the danger zone – that window of time between April 12th and May 22nd when no further extension of Article 50 are possible. Then she could do what she has always wanted to do and force MPs to pick between her deal and no-deal.

There is evidence for this too. Just look at her proposal for the first extension of Article 50, in which she outlined two time periods, but then only asked the EU for the shorter one. You would, let's be frank, be mad to trust her.

The decency and acceptability of May's strategy hinges on the meaning of that sentence. If she requests a long extension but intends to get the deal done quickly, it is perfectly honourable, truthful and sensible. If she only requests the extension until May 22nd, it is a trap. Neither MPs nor Brussels should allow her to spring it.