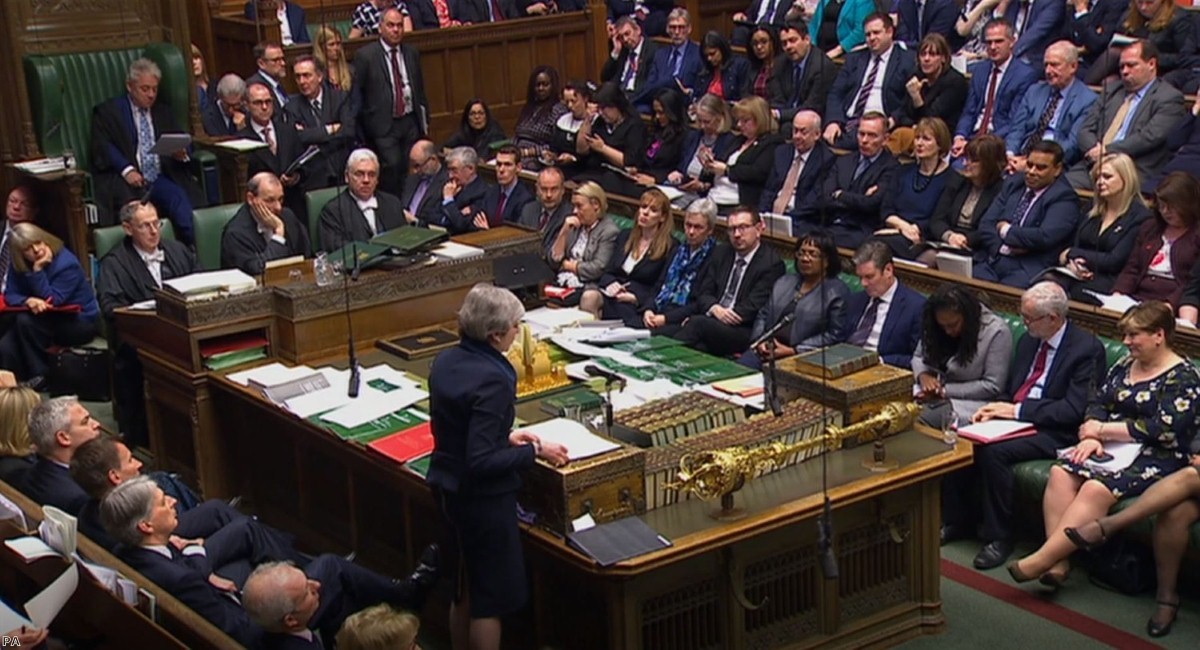 The prime minister was as misleading and cynical as ever, even in retreat. She just cannot help it. It is part of the programming.

She came to the Commons to perform what was billed as her latest major U-turn. After all her repeated insistences that we would leave the EU on March 29th no matter what, she was finally conceding that an extension might be necessary.

There's been a consensus among officials in Whitehall and Brussels on this for months. Everyone knew she had to extend, even if she got her deal through. It's an unquestionable technical reality. But she is the first bona-fide post-truth prime minister. She will deny that which she knows to be the case and then later flip on it as if it was never said in the first place. And she does it with such a dull sense of repetition that your brain switches off and goes to sleep and you are barely aware it is happening at all. It is like some terrible drug. She'd denied over and over again that Article 50 would ever be extended and today she came to the Commons and ate her words. But it was as if she'd been saying them since the dawn of time.

In truth, she had no other choice. Her moderate ministers were threatening to rebel and back the Cooper-Boles amendment seeking an extension mechanism. So she gave way just enough to discourage them. Her plan, she said, was to bring her deal back for a meaningful vote on or before March 12th. If it was defeated, she'd be back the next day with a motion on no-deal. And if that was defeated, she'd be back the day after that with a motion on a "short" extension of Article 50. If it passed, the government would go and petition the EU for it.

No-one mentioned, incidentally, the nightmare scenario: If MPs voted against no-deal and Article 50 extension. They are perfectly stupid and cowardly enough to do so. That terrible potentiality just sort of hung in the air, unspoken.

The May proposition was functionally very similar to the Cooper-Boles amendments, except in two respects. Firstly, Cooper-Boles put the power of extension in MPs' hands by statute, passed against the government's wishes. It did not rely on trust of the word of a prime minister who had lied countless times to avoid Commons defeats and whose government had been found in contempt of parliament. Secondly, it left the timing of the extension in the hands of the government, rather than MPs.

May clearly plans to use this timing to her advantage. She knows there is a complication in Article 50 extensions. That complication is the European parliament election in May. If Britain takes part, even in a strictly formal way, it can keep on extending Article 50 after July. But if it does not take part, July 1st becomes an absolute unextendable cliff edge.

I wrote about this in detail last week. It has now been confirmed by the prime minister in the Commons. She said:

"An extension beyond the end of June would mean the UK taking part in the European parliament elections. What kind of message would that send to the more than 17 million people who voted to leave the EU nearly three years ago now? And the House should be clear that a short extension – not beyond the end of June – would almost certainly have to be a one-off.  If we had not taken part in the European parliament elections, it would be extremely difficult to extend again, so it would create a much sharper cliff edge in a few months’ time."

The prime minister never speaks clearly. It is not in her nature. But the implicit message was perfectly decipherable. It is there in the warning about Brexit voters being confused by UK participation in the elections. And it is there in the statement that the extension would "almost certainly" have to be a one-off. She is going to ask for a short extension – probably a couple of months – then refuse to take part in the European elections. July 1st then becomes the cliff-edge-which-cannot-be-moved.

Brexit committee chair Hilary Benn asked the prime minister what exactly she planned to do with the extension. After all, two months is not enough time for anything – not to plan for no-deal, not for a referendum, not for a renegotiation and not for an election. She blustered as usual. But the answer was quite clear. She would just keep on trying to get her deal through.

There is no change in strategy. As ever – indeed since the very beginning of this process two years ago – she understands that the only positive quality her deal contains is the fact it is better than no-deal. Once we go past May without holding elections, the cliff edge becomes immovable. And then, finally, with all options exhausted, MPs will have to fall in line with her deal or else topple into the abyss. That is how she checkmates her opponents. That's the plan.

It is perfectly visible now. Anyone can see it. But no-one is stopping her. There is only one way to do so: Insist that Britain takes part in the European elections. That means passing the legislation to do so at the point of extending Article 50. Anything else leaves us at her mercy.