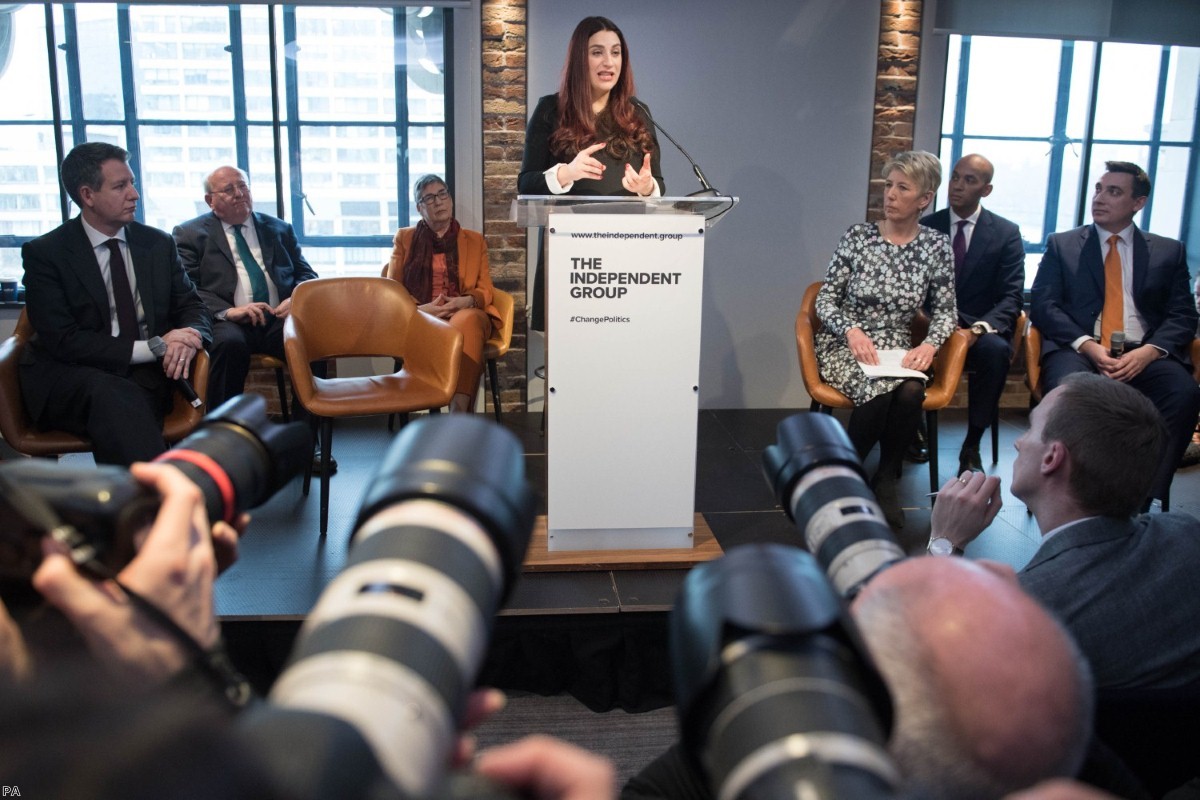 Labour split: The head says no, the heart says yes

On the face of it, this was a disaster. With just 39 days to Brexit, a group of Remain supporters split from the Labour party. It simply made no sense. They were either two years too late or two months too early. Leaving now seemingly gave up on pushing the Labour leadership into backing a second referendum, when there were no disadvantages to leaving in a few weeks instead.

And yet. It was hard to watch the press conference from the seven Labour MPs without a strange sense of hope. It was surprisingly emotional. Luciana Berger was the first to speak. She has gone through years of racial abuse and throughout it all she conducted herself with the utmost integrity. As a speaker, she is genuine, emotionally real and relentlessly logical in her arguments. She issued one of the most devastating critiques of a mainstream political party we've heard in years.

She said she joined Labour because of its values of equality, anti-racism and social justice. "These values have been consistently and constantly violated, undermined and attacked," she said. "I cannot remain in a party that I have today come to the sickening conclusion is institutionally anti-semitic. The leadership has willfully and repeatedly failed to address hatred to Jewish people within its ranks."

After her, the six other MPs stood up to give their reasons for leaving. Mike Gapes, who has worked in the Labour party since 1977 and served as an MP since 1992, was making a break with the loyalty of a lifetime. Chuka Umunna stated clearly that the old system was broken.

The quality of the contributions was variable. Umunna tried to make a big pitch to the country, but it fell a bit flat. Figures like Gavin Shuker and Angela Smith are less-than-electrifying performers. But there was something deeply grave and affecting about watching it all unfold.

These people were not taking the easy route. They were giving up on a lifetime of attachment to a party, which means giving up on friendships as well as job prospects. They knew full well that they would now be targeted by a Corbyn abuse machine which spans from the very top of the party to the lowliest online troll. It takes a heroic level of bravery to know that, to steel yourself, and go through it anyway.

But there was something else. For the first time in a long time MPs were standing up and speaking something resembling the truth. The party system was not reflecting the realities of the political moment we're living in. Something had to give. The status quo could not be changed by allowing it to continue.

Even the most positive developments over the last few years, like Keir Starmer gradually shifting the Labour position on Brexit into something remotely credible, have taken place in a mercurial world of post-truth politics, in which coded messages on things like free movement are issued in order to keep the broad church of the party together. On the less favourable end, the government acts seemingly without any commitment at all to accuracy. Brexit supporters on the Tory benches have made lying a core mechanism of political debate.

But now a group of MPs were standing up, with all the risk it entailed, and stating clearly and without equivocation the way they saw things. At certain moments, it felt like you'd seen a pool of water after trekking through a desert.

So even though your head said no, your heart said yes. Finally, something was happening. Finally, the cracked edifice of a political system which simply could not reflect the dreadful period it was going through was coming apart. Finally, there was a positive development.

And there was some decent strategy there too. The MPs were not forming an new party – not yet anyway. First they would sit as a grouping in parliament, called the The Independent Group. They did not quite say as much, but it looked like it would operate as a kind of new party basecamp.

MPs from other parties, including Tory moderates, could join, and must surely be strongly tempted to do so. It could still lend its support to anti-Brexit votes in the Commons. Hell, it could still lend its support to a minority Labour government if there was another election. There is no reason, in a period in which any party struggles to get a majority, that it should be letting the Tories stay in power. And, if things change, those MPs could meld back into Labour without too much fuss. It's a practical way to proceed.

Perhaps it might even work for fighting Brexit. Who knows? It's as possible as any other development. The real threat of other Labour MPs leaving could scare the leadership into shifting on a People's Vote. There is now at least a strong argument that refusing another referendum is actually hurting Labour's ability to form a government. And it leaves anti-Brexit figures inside the party, like David Lammy, acting as good cop to the splitters' bad cop. After all, the existing strategy wasn't working. Why not shift things up?

The question of what this does to the fight against Brexit is honestly an open one. You can go either way. But probably that assessment is based as much on hopes as calculation. The truth is it was emotionally encouraging to see today's presentation. For once, something active and positive was being undertaken. People were admitting out loud what anyone with eyes could see: That the system is broken and failing. That it has to change. And it would have taken a cold and brutalised tribal political heart to resist feeling some joy at that.