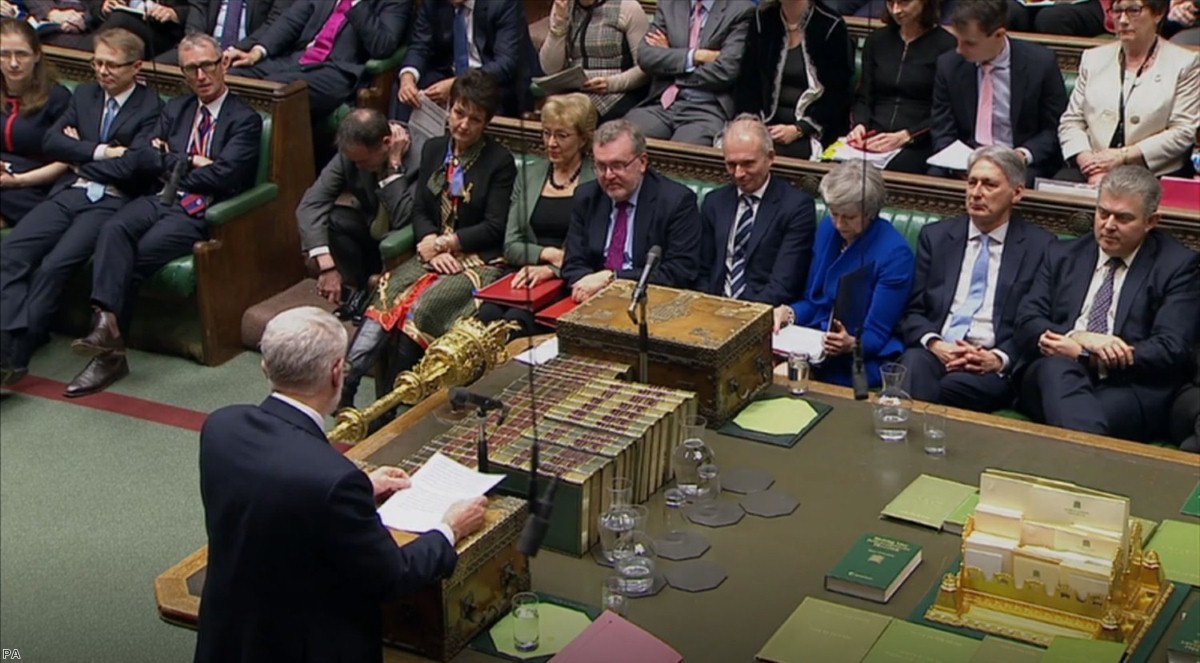 Yesterday was Theresa May's turn. All her various failings were laid bare: her short-sighted red lines, her self-harming cultivation of ERG Brexit myths, her presentational inadequacy, her lack of political empathy, and her utter strategic incompetence. It finally all came together in a historic humbling – the worst defeat of a prime minister in parliamentary history.

Today it's Corbyn's turn. His attempt at a no-confidence motion against the government, the one he had tried to avoid, was defeated by 325 votes to 306. As expected, the DUP stepped in to protect the prime minister. The Labour leader is now at exactly the point he wanted to avoid: the moment when he has to come up with a Brexit policy which does not involve him pretending that a general election would somehow magically fix everything.

Some senior Labour figures now insist that their policy is simply to keep firing off these confidence motions, pointlessly, only for the DUP to keep deflecting them away. That is not a policy. That is a continuation of a holding pattern, which they intend to pursue while the country falls apart.

The time for Corbyn's 'constructive ambiguity' over Brexit is over. The spotlight is now on him. There is no place left to hide.

For the last two and a half years, the leader of the opposition has been an absence. Brexit is the only political debate taking place in this country and he showed no interest in discussing it. His own Brexit proposals, apart from customs union membership, are vague to the point of meaningless.

His supporters will say that there are other things wrong with this country. And they're right. Austerity has been a moral outrage and an economically illiterate failure. The NHS and housing have been in crisis so long we've stopped noticing it. Our criminal justice system is useless. We've hollowed out the economy so that it is split between insecure low income jobs and highly paid professional ones, with few ways of going from one to the other.

But there's no point pretending you can just ignore Brexit. You can't treat it like any other political issue. It dominates everything. We're discussing the entire trading structure of the country. There's no money for the NHS if we get this wrong. There's no money for housing. And on a deeper social level, there is no chance for an open, compassionate, left-wing country when you hand the keys to a bunch of right-wing xenophobic fantasists.

We'll never know how much we lost because of Corbyn's absence. We'll never know if a forensic opposition leader, who scrutinised the government and offered a credible alternative strategy, could have helped shift the Brexit policy as it was formulated. That opportunity is now lost. What we do know is that he can play a decisive role in what happens next.

The government, as a functional operation, is dead. The DUP have put it on life support, but it sits in Downing Street as a purely symbolic entity, not one which is capable of actually doing things. It has no ideas. It has no plan. It has no mandate. It was denied its majority at the election and its Brexit deal has been annihilated.

Parliament has no majority for any option, be it no-deal, an alternate deal, or a People's Vote. The various groupings of MPs cannot unite around a proposal because Labour's policy black hole prevents there being a majority for any of them.

That makes Corbyn the most important person in British politics. He can whip in favour of one of these options and suddenly, with the assistance of other opposition parties and a dozen or so moderate Tories, there is a majority.

There are now only three options for him to choose from: No-deal, an alternate deal or a People's Vote.

No-deal happens automatically on March 29th, unless something stops it. Corbyn says he will not let that happen. So let's be clear what that entails. It is not a question of refusing to back a motion on no-deal. There is no motion to be delivered on it. It is the default eventuality. He has to back an alternative proposal to prevent it.

Option two is an alternate deal. May says she's interested in working across the aisle. Michel Barnier has said that all sorts of options are available at the EU level if the UK shifts its red line.

Corbyn could right now sign up to customs union and single market membership and try to force it on the prime minister as the price of his cooperation. Even without her, he might be able to find a Commons majority for it. None of this vague meaningless rubbish about a 'close single market relationship', none of the shifty semantic contortions. Single market membership.

Yes, that means accepting state aid rules. They will be a fixture of any Brexit deal whatsoever and anyway they don't stop Corbyn doing anything.

And yes, that means accepting freedom of movement. Good. It is a gift, allowing us to live and work and retire wherever we like. It brings bright young people to this country to help care and pay for our aging population. It makes this a more vibrant, diverse and beautiful place to live. We were told Corbyn would be a brave and principled figure who would stand up to the ignorance of the right-wing mainstream media. So let's see it.

But Corbyn fears this option, because he would suddenly be involved in delivering Brexit. He fears being penalised by the Remainers in his party. He fears being tainted by the consequences of what is happening in the eyes of the general public. He fears he'll no longer be able to blame it all on the government.

The third option is a People's Vote. Everything is primed for this. Europe has made it clear it would extend Article 50 to hold it and that it would offer a window that went beyond the elections in the summer, allowing enough time to do it properly. Morally, the case is watertight. With no mandate for May's deal or anything else, and parliament in deadlock, we need public support for whichever option takes place. If that requires people to get up one day and go vote again, then so be it.

Corbyn's emissaries on earth cast these arguments aside. They hate talking about a second referendum. Even getting them to say the words is like taking a child to the dentist. He's scared that grasping that nettle would cost him his Leave voters.

And it is true. There are dangers for him everywhere. But he has to grasp one of these nettles. He has to adopt a position. Doing nothing does not excuse him of responsibility for what happens next. It makes him as culpable as the government and even more cowardly. It is an active choice and a reprehensible one – the choice of party over country, self interest over national interest. The same choices May made. The choices that make life easier day-to-day but see you condemned by the history books.

The time for constructive ambiguity is over. Corbyn cannot hide any longer. He has to make a decision.