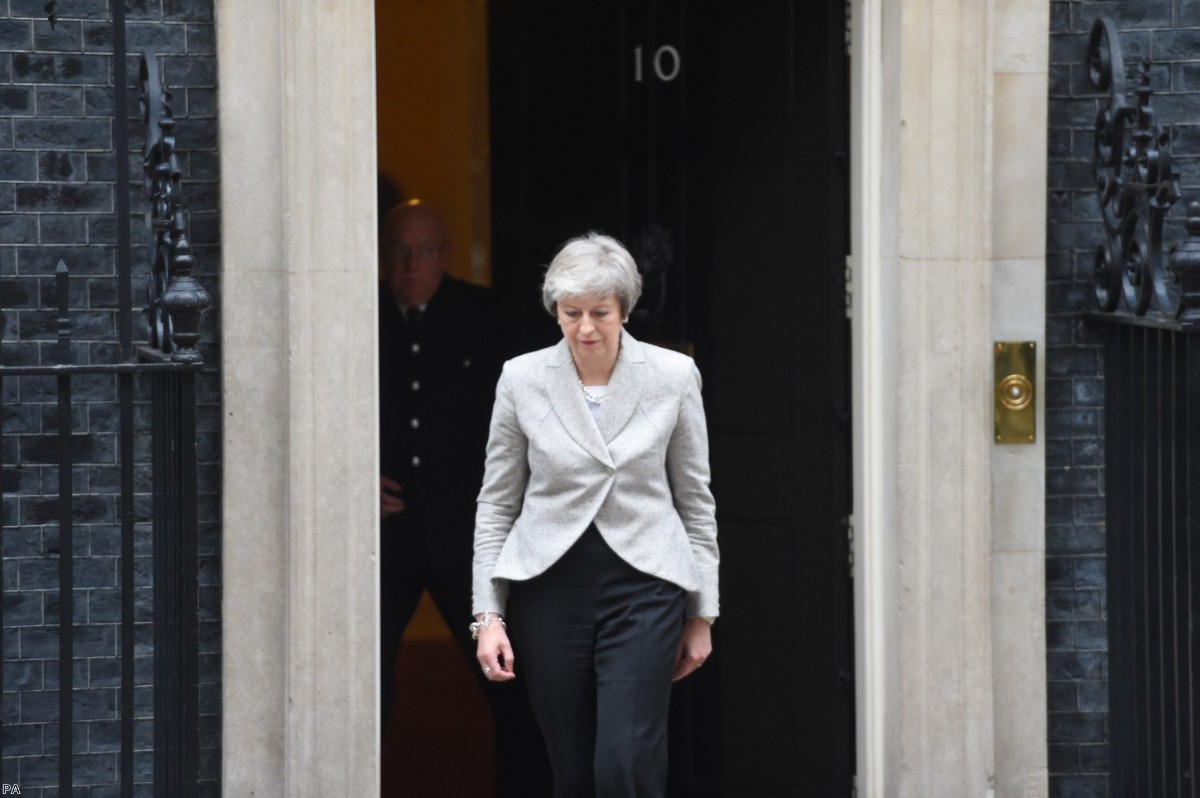 May’s Brexit deal is a humiliation for Britain

It doesn't matter how you look at it. You can squint with one eye, or stand upside down, or peer at it askew. You can be as sympathetic or stern as you like. It makes no difference. From every angle, on every basis, Theresa May's deal is horrific.

It is intolerable on a democratic, political, economic and logical basis. It takes one of the world's leading powers and puts it in a diplomatic and trading stranglehold. It undermines Britain's economic status, demolishes its political status, severs its territorial integrity and imposes a dangerous and unacceptable governance structure on Northern Ireland.

The problem is not that it is badly written. Some incredibly talented and ingenious people have put this thing together. It is technically accomplished and well drafted. The problem is due to the parameters they were given to work with.

May wanted to extricate the UK from EU rules, prevent a hard border on the island of Ireland, and maintain the territorial integrity of the whole of the UK. This wasn't possible and the experiment to pretend otherwise has resulted in a Frankenstein's monster, a broken, grotesque invention, stumbling around, half-alive, tormented by anger against its creator.

The punishing timetable of the deal is reminiscent of Article 50, with all the failure and pain that entails. It is a conveyor belt towards an abattoir.

The deal offers a transition to the end of 2020. This can be extended once, but this must be done by July 2020. This is, to all intents and purposes, the new cliff edge. Without an extension, we will fall into the backstop. And no matter what wasteful lies May tells now, Britain will never pick the backstop, because it is appalling.

So in July 2020 the UK will inevitably ask for an extension of transition. The EU will give it to us, but first they'll ask for money. And we will pay. We'll pay them anything they ask for, because the entire structure of the deal gives the EU negotiating advantage.

You can't blame the EU for it really. They are coming up with these short time scales and cliff edges because it gives them a negotiating advantage. There's only so cross you can get with someone for ruthlessly pursuing their interests when your own leaders are too incompetent to do the same. Be angry instead at the Brexiters who demand short transitions in an emotional fit and fail to understand that it is our own leverage they eradicate.

The extension can only last two years, until the end of 2022. But this is not enough time. The EU will be focusing on European elections until May 2019. No meaningful talks will take place until there is a new commissioner, sometime in the autumn. Then Britain needs to work out what it wants, something it has so far showed no signs of being able to do. Then it needs to negotiate it. Then it needs to implement it – a job which can be big or small, depending on the outcome of the negotiation. And then it needs to be ratified, which requires approval from every parliament, in every EU member state. The last part alone took two years for Canada.

There are alternatives. The UK could decide on a much simpler approach. If it signed up to full EEA and customs union membership, it could be done in time.

Maybe if it decided to sign up to a standard free trade agreement – the Canada-with-no-frills model – it could also be done. But this latter option would need to be taken immediately, not after years of negotiation, because it involves a massive spending project on customs infrastructure, including the building of new roads, the hiring of tens of thousands of staff, and the creation of countless new domestic regulators. It would also sever Northern Ireland completely from the rest of the UK, because it would need to stay in the EU ecosystem while the rest of us pulled away.

So what do you do instead? How do you get this through in time? There is a chance we could split the deal into two pieces – one to be passed quickly by the EU and the other going out to member states for after-the-fact ratification. But it's not at all clear that we can get all the right bits in the right agreement for this to work. And then what happens? If they reject it, our entire trading system with our largest partner becomes illegal. We become hostages to every individual EU member state and a splattering of regional parliaments.

If 2022 ends with no deal in place, which by any realistic assessment it will, we fall into the backstop. And then the real horror story starts. Overnight we lose services access to the continent. Our customs arrangements shrivel up into a little ball. There are no transport agreements, so permits for UK hauliers will be limited to five per cent of existing traffic. There are no veterinary or phytosanitary agreements, so agricultural products will be stopped and checked at the border, causing huge disruption. There is no common regulatory regime on goods, so they will also be checked and tested.

We become little more than an addendum to the EU's trading relationships with other countries. Article 3 Part 1(a) of Annex 2 of the Northern Ireland Protocol in the withdrawal agreement states that "the United Kingdom shall align the tariffs and rules applicable in its customs territory with the [EU's] Common Customs Tariff as set out in Article 56(2) of Regulation (EU) 952/2013."

That means we've harmonised our tariffs with those of the EU and have to apply the same duty rate to whichever country they do a deal with. But there is no reciprocal duty for those countries to open up their markets to us, because the deal is for EU member states – not countries in bespoke backstop agreements which have been devised to stop them imploding.

Technically, we can try and negotiate a separate trade deal with these countries, but what do we have to negotiate with? Not tariffs, because those are controlled by the EU. And not regulations either.

There are just two possible offers. We can open up our services and offer more visas so immigrants can come here more easily. The first is of limited usefulness, the second is politically unpalatable.

We're strapped on the surgery table, unable to move, being opened out to whoever wants to do a deal with the EU and getting nothing in return.

And after all that, May didn't even prevent the carving up of the UK's territorial integrity in the Irish Sea, as she claimed. There are actually two regulatory levels in the backstop proposal.

Britain is only signed up to 'level playing field' provisions. On competition and state aid, that is dynamic, which means that it updates whenever the EU updates its own rules. On the environment, social and workers rights it is non-regression, which means that it must stick to the existing level but doesn't need to track future changes. Northern Ireland, however, is fully signed up to the EU's regulatory regime for goods, a much higher standard of alignment.

That has significant consequences. It means agricultural goods sent from the UK must be checked at the border – in this case at the Port of Larne. At the moment, we're planning to unilaterally follow all EU regulations anyway, so this is just a fracture. But if we start going another way, for instance by following the hard Brexit siren calls for a Canada deal, that fracture splinters open.

The ERG talk of vassalage is overblown in the case of the UK, but it is not at all hysterical when you apply it to Northern Ireland. It is about to accept laws which it does not have any democratic means of refusing, amending or overturning. This is intolerable, on the most basic possible notion of democratic theory.

Article 15 of the Northern Ireland Protocol lays out the murky process of how this takes place. EU laws that are "amended or replaced" are automatically updated in Northern Ireland, with no say from the people they will affect. If it's a new law, the UK must be informed of it and there will be an "exchange of views". Then it is either passed, or, if it is not, "all further possibilities" are explored to maintain the Protocol. If that doesn't work, the EU takes "appropriate remedial measures".

It's obvious how this will work in practice. They'll find a way to start stuffing new laws into old ones, so that they can designate them as rules being "altered or replaced" and apply them automatically. If not, how many disregarded new laws would it take for the agreement to break down? Sure, Britain can kick back a few. But the reality of the dynamic is that it'll have to nod most of them through .

The Northern Irish situation is morally confusing. This move prevents a border, which would have done real damage. It also offers it a foot in both the UK and EU single market, which will likely lead to a boost to investment. But the democratic case is appalling.

It might even be illegal. There was a 1999 European Convention of Human Rights case called Matthews vs the United Kingdom, in which a Gibraltarian resident asked a simple question: If I have to abide by EU laws, how come I don't get to elect an MEP? That's a damn fine question and one which can equally be asked here.

And then after all this horror show is over, in the distant future, we get to our final state. And what is that exactly? No-one knows. The political declaration published yesterday is a post-truth document.

It promises "the protection of [the UK's] internal market" while containing measures which do the opposite. It guarantees the UK an "independent trade policy" when in reality removing any possible leverage it would have to deliver one. It is firm on free movement – May's only real red line, in reality the motivating cause for this entire degenerate project – but even that is subject to change because the UK's negotiating posture might "evolve over time".

At one stage the document basically lays out the two alternate visions of the UK-EU relationship, one with close regulatory alignment and one with the hard Brexiters' fanciful and pathetic allusions to high tech solutions.

And then finally the truth is revealed, in a killer paragraph buried in the text:

"The extent of the United Kingdom's commitments on customs and regulatory cooperation, including with regard to alignment of rules, would be taken into account in the application of related checks and controls, considering this as a factor in reducing risk. This, combined with the use of all available facilitative arrangements as described above, can lead to a spectrum of different outcomes for administrative processes as well as checks and controls."

A spectrum of outcomes. The same old dilemma as ever just sits there because the UK is unprepared to have an honest conversation about it. Do you want trade or control? The extent to which you give up one allows you more of the other. But even now, as we lose our status in the world, it is just as unresolved as it ever was. We don't know where the hell we're going.

And now here we are, staring at a deal so unimaginably bad that no-one wants it. Not the EU, not the UK, not Brexiters, not Remainers, not Tories, and not Labour.

No-one wants it and we're told to do it anyway. That is an insane proposition and it should be rejected.