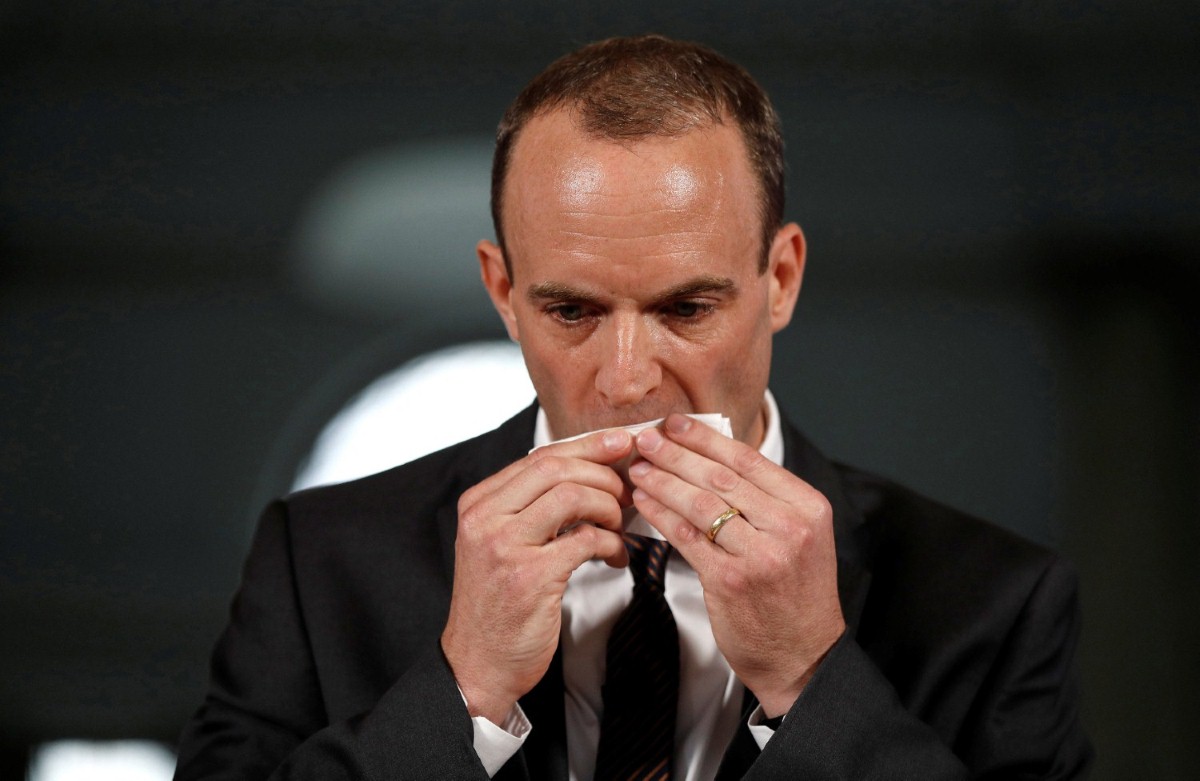 He kept trying to sound upbeat about it, but his nerves gave him away. As the press conference wore on, Dominic Raab started to come across like some kind of deranged flight steward, insisting that in the "unlikely scenario" of no-deal, everything would be fine. The plane would hit the water smoothly, just like in those cartoons they put on the safety leaflets, and then happy families would slide down into the inflatable rafts.

The Brexit secretary had been sent out to release the first batch of the government's summer holiday airport thrillers, in the form of about 70 technical papers on what the UK would do in the event of no-deal. He attempted to maintain a smile and confident manner throughout, but his brow glimmered with sweat and his voice kept wavering mid-sentence. It was not a convincing performance.

His task was, to be fair, unenviable. He needed to make no-deal look terrible and also fine, because it is only by the simultaneous maintenance of both of these contradictory propositions that the Tory party can be held together.

Theresa May needs no-deal to look awful, because a comparison with it is the only thing to recommend her own rubbish Chequers plan. The ERG hardliners on the backbenches need it to look completely normal, because it is the only form of Brexit which does not demand that they face the existence of objective reality.

The only way to maintain the fraying link between these two groups is for Raab to somehow try to maintain this doublethink and deliver a speech which made it clear that no-deal would be, yes, a disaster, but also perfectly OK. Perhaps that explains his twitching facial muscles, as if a better, more honourable minister – one who still believed in consistency and public responsibility – was inside him, trying to get out.

As with all formal attempts to grapple with the issues of leaving the EU, the documents themselves read like a list of reasons not to attempt the whole endeavour in the first place. They lay out, in commendable detail, two of the core objections to Brexit: firstly, that it results in us losing all control, and secondly that they will drown businesses in red tape.

Brexit is like the snake eating its own tail. It creates all the things eurosceptics have spent decades telling us they hate.

The first hints of just how much control Britain would lose in the event of no-deal came in Raab's speech, when he outlined how the UK would take "unilateral action" to "maintain as much continuity as possible". Like what? Well for a start we'd accept the testing and safety approvals of existing medicines if they're carried out by an EU member state and then just pray the EU would do the same for us.

This was just one item of praying in a speech which was full of them. There were several appeals to the good judgement of European states. This was disappointing. Good contingency plans are based on how your opponent would behave at their worst, not their best. Basing a no-deal emergency strategy on people being reasonable makes no sense. If reasonableness had survived this process, no-deal would not be happening.

This unilateral approach will not be limited to medicine. On food, Raab tried to rubbish claims that there would be shortages, because the EU would still want to sell the UK food. But this is irrelevant. The problem with food import/exports is not demand. It is that outside the EU they require certification. Without a deal there is no system for doing so. And without that, there is a blockage at the border.

The solution, according to Raab, was to unilaterally recognise EU food standards and pursue equivalency arrangements on food regulation.

It is a fascinatingly stupid thing to have said. Equivalency measures are a form of deal. Saying that you want to use a deal to solve the problems of no deal simply does not make any sense. It effectively concedes that no-deal is impossible.

So all we're left with, in the end, is unilateral recognition. In other words: we will accept anyone's regulations just to keep things chugging along, without securing anything in return. Total lack of control.

The chaos here will be contrasted by the suffocating order of new bureaucratic demands placed on British businesses. We will be taking exporters and importers  from an open market in which they can transport whatever they want to anywhere on the continent, to one in which all sorts of regulatory and customs barriers are put up against them.

Those importing goods to the UK, for instance, will have to register for a UK economic operator registration and identification number, ensure their contracts and international terms and conditions of service reflect that they are now an importer, consider how they will submit import declarations – including whether to engage a customs broker, freight forwarder or logistics provider, and if not to acquire the appropriate software and necessary authorisations from HMRC directly – and then decide the classification and value of their goods and enter this on the customs declaration.

That final part is more complicated than it sounds. Let's say you sell biscuits. They come under the category of 'composite agrigood'. Tariff rates are calculated on the basis of the percentages of milk fat, milk proteins, starch, or glucose and various forms of sugar in the product. They must be cross-referenced with 504 potential recipes to 27 different kinds of product, leaving 13,608 categories of bakery and confectionary good.

After all that, they will need to make sure their carrier has submitted an entry summary declaration at the appropriate time, paid VAT and import duties, including possibly excise duty, and navigated any duty suspensions, customs suspense arrangements or excise duty suspension regimes they might face.

These new demands will be survivable for small firms, which mostly don't do much exporting, and big ones, who can afford to employ people to take care of it. But many medium-sized firms will be in serious trouble.

It’s hard to see what has been achieved today. By outlining what no-deal would entail, it makes it clear that no sane country would do it. Even in this context, the plans themselves require some kind of deal for them to operate, which means that they do not even satisfy the definition of no-deal contingency measures. They admit to the EU now, just as we enter the climax of Brexit talks, that no matter what they do the UK will unilaterally recognise their regulatory standards, thereby giving away the negotiating position which Theresa May claimed to be so keen to protect for the last two years. They do not offer the chance to prepare for no-deal, because the kind of work that would be required is simply too time-consuming to be done in the time available. They do not placate the ERG hardliners, because they are based on reality rather than Biblical fiction. And they do not do the government much good as a scare story, because they toned down the language to mollify the headbangers.

It is another event in which an awful lot of work has been done to accomplish nothing. Just another day in Brexit land.