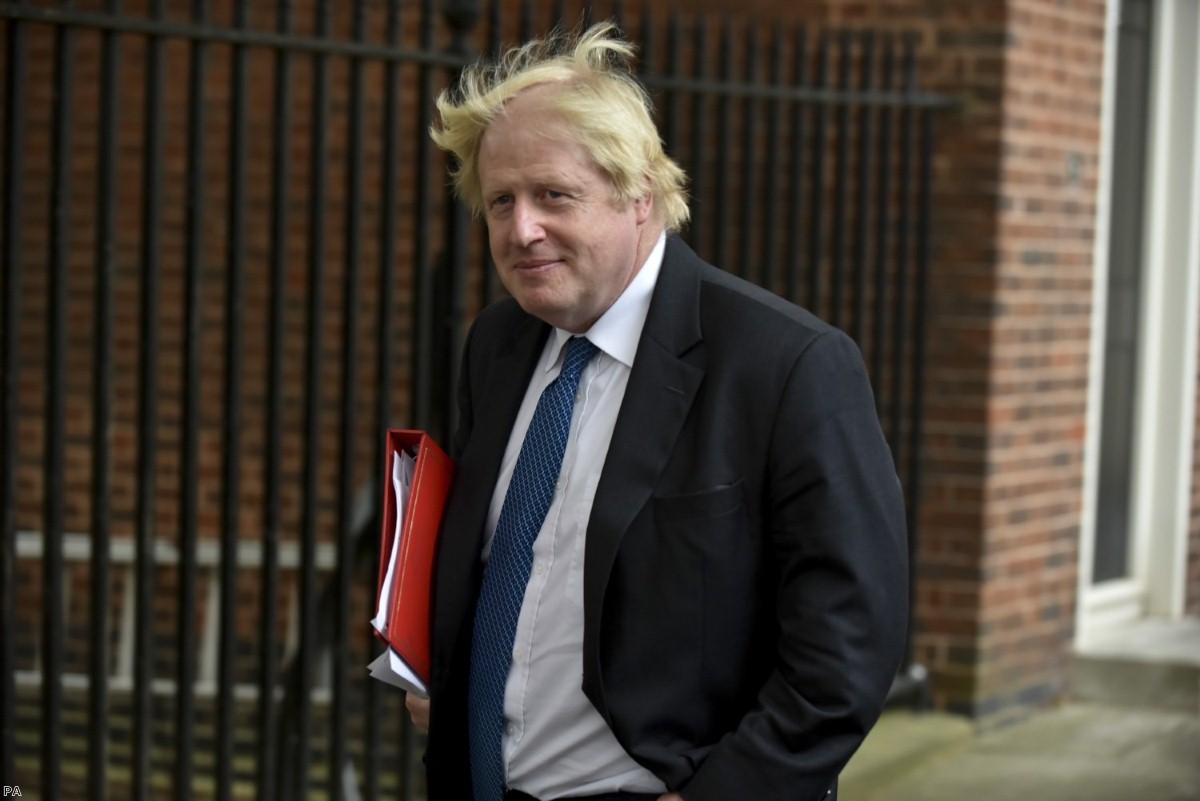 Dawn Sturgess died on Sunday night. She and her partner, Charlie Rowley, seem to have at some point handled a container with the Novichok nerve agent used to target the Skripals earlier this year. They got a concentrated dose.

She was a British citizen, killed on British soil by a hostile foreign power. It was one of the most grave foreign policy incidents of recent years.

For Boris Johnson, the timing was inconvenient. David Davis' resignation had put him in a difficult position. If he resigned after him, he would look like a follower rather than a leader. But if he didn't, he would lose his carefully-manicured status as the leader of the Brexiters in the Tory parliamentary party. So he locked himself away with aides to figure out what to do.

He could not be contacted. He went into radio silence. Then he invited a photographer to take shots of him as he signed a lengthy three-page resignation letter. He called up his friends at the Telegraph, where he has served as a columnist during his time in office, and they splashed it on the front page in glowing terms.

That was what the foreign secretary of Great Britain and Northern Ireland was doing after Dawn Sturgess was murdered by the Russian state in Wiltshire.

He ended his time in the job in the same way he began it: with a complete indifference as to what it entailed, a relentless zeal for his own promotion and a total indifference about the truth.

It was clear from the beginning that his temperament did not suit the demands of the office. Anyone could have predicted the consequences and they soon came to pass.  Arguably the worst moment of his tenure came when he risked increasing the sentence of British woman Nazanin Zaghari-Ratcliffe in Iran. Insufficiently briefed or insufficiently interested – it's not clear which – he told MPs she'd been in the country training journalists, allowing the regime to argue that she was engaged in "propaganda against the regime".

Those from other countries were routinely insulted or dismissed. President Francois Hollande of France was compared to a Nazi prison guard, attendants at Burma's most sacred shrine were treated to a colonial-era Kipling poem, Libyans were informed they could create a new Dubai once they cleared the "dead bodies away". On and on it went. Johnson has a sneering view of the rest of the world which occasionally skates into something darker and more racial.

The key to Johnson's success has been his manner. A long time ago – it feels like another universe – he broke through into the public consciousness as an occasional panellist on Have I Got News for You. It was an old and reassuring British archetype: the bumbling, self-deprecating, shambolic but ultimately harmless toff. And for a while it was funny. There's no point pretending otherwise. It was unusual and it was humorous. It is a conceit of ourselves which we rather like – the country which can't get its act together, but somehow succeeds all the same. The nation which ad-libs a bit of Latin and then gets itself locked out the house.

But the mask slipped a long time ago. People would say things like 'oh beneath all the bluster he's very clever you know'. But that wasn't quite it. It wasn't so much that he was smart. He was scheming. Throughout his time as foreign secretary, he provided a constant drip-feed of disloyalty to a prime minister who saved him from the wilderness of the backbenches when he and Michael Gove committed Brexiter hara-kiri in the wake of the referendum.

None of this was based on principle. The very idea is absurd. Johnson essentially functioned as a mirror image of the Labour position. Where Jeremy Corbyn had decided to keep his electoral coalition together by always staying one step closer to Remain than wherever the prime minister was, Johnson wanted to secure his position by always staying one step closer to Leave than wherever she was. It was the logic of the flock, not the demands of conviction, that drove his interventions.

In terms of actual content, there wasn't any. Quick – try to think of something Johnson accomplished at the Foreign Office. There is nothing. Even on Brexit, the area he supposedly cared about, Johnson never really addressed the detail at all. Even Liam Fox would sometimes say something wrong about the Irish border or customs. Johnson simply never discussed them. It was as if they never existed, except to occasionally fan the fires of Leaver mania.  There was not a slip of content behind the machinations.

When we look back on Johnson's career, though, it won't be the irresponsibility, the reputational embarrassment or the scheming that we remember. It will be the dishonesty. He is Britain's leading post-truth politician.

In a sense, we live in the world he created. Johnson's tenure as Brussels correspondent for the Telegraph between 1989 and 1994 saw him create a new type of journalism in Britain, a kind of half-literary subgenre, where bits of truth were warbled up with tribalistic nonsense designed to stoke Tory feelings of national victimhood. The pieces all had the same basic theme – that European bureaucracy was strangling British commercial ingenuity.

It was here that the bendy bananas and all the other nonsense started. Johnson himself seemed completely uninterested in whether any of it was true or not. "Everything I wrote from Brussels I found was sort of chucking these rocks over the garden wall," he said. "And I listened to this amazing crash from the greenhouse next door over in England as everything I wrote in Brussels was having this amazing explosive effect on the Tory party, and it really gave me this I suppose rather weird sense of power."

He has used this tactic throughout. In his long, rather turgid resignation letter yesterday, Johnson referred to his efforts as London mayor to try to "protect cyclists from juggernauts". As ever, there is a nugget of truth and then a hastily-scribbled myth sketched out around it. The rules on new lorry safety features were passed by the European parliament four years ago, although there had been delays. Johnson himself had lobbied Westminster to be part of them.

An interesting passage in Johnson’s letter – where he blames the EU for lorry safety standards. It reveals a lot about Britain’s now former foreign secretary. 1/4 pic.twitter.com/oAvBlnLrQo

Johnson bends reality around him like a large planet bends gravity. He's encased in a film of half-truth, a membrane of stupefying blather, in which it simply does not matter all that much whether something is true.

That's how he found himself writing two pieces on Brexit – one pro and one anti – before finally settling for one of them. Either would have been fine by him. That's how he spent months pretending there was no choice between scrapping free movement and single market membership. That's how he complained bitterly about the need to reform immigration in his letter yesterday despite writing a piece in the Telegraph immediately after the referendum strongly implying that free movement would continue. That's how he can stress the need to back May's Chequers plan one day and then say it represents the death of Brexit the next.

He represents a new type of figure in British public life: the journalist-politician. Michael Gove came from a similar place, although he evolved out of it. Nigel Farage essentially operates as a columnist-broadcaster occasionally dabbling in being an elected MEP. In the US, Stephen Bannon fulfilled a similar role for Donald Trump, turning the Breitbart website into a part of the formal apparatus of the political process.

The people who create news and those who report it have never been kept perfectly apart. They always develop friendships or loyalties. But Johnson is something new. He combined the role of journalist and politician in one body. The creation and reporting of news was now one thing. And that dangerous process was clear in the way he conducted himself in office and the effect he had on the politics of the country.

If we have any luck, that effect will end here with his departure from the Foreign Office. We do not seem to, so it probably won't.