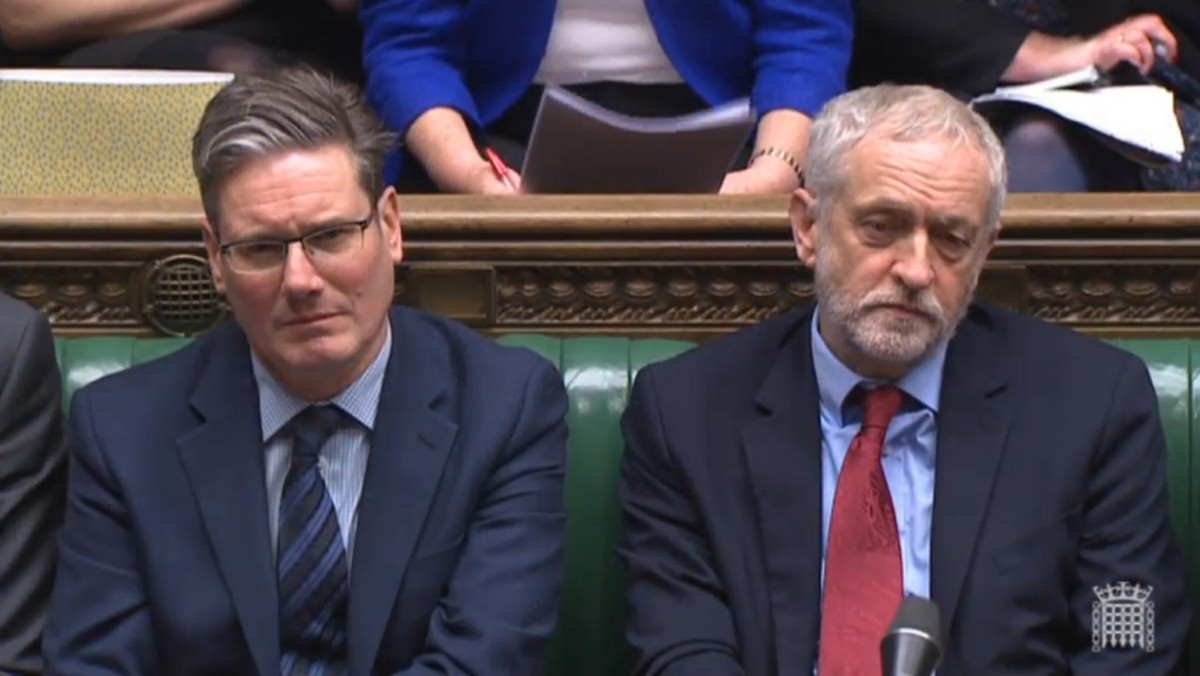 Amid all the nonsense, Labour starts the right fight on Brexit

Politics is becoming increasingly bespoke. It’s like each party is now increasingly a supermarket of contradictory ideas, which you can pick from at will. The Tories have the full offer, from throw-open-the-borders global Britain to crazed authoritarian nativism, and that’s merely at the Cabinet table. Labour has gone much the same way, except you can now pick from different aspects of the same politician.

Keir Starmer, who is usually very sensible, started speaking the most absurd nonsense on ITV’s Peston on Sunday this weekend. Asked about the palava over where Britain’s post-Brexit passports were produced, he replied that they needed to be made in the UK. “The passport is such an important issue of course it should be a British company,” he said. You could almost see him smarting inside at having to deliver this rubbish, which someone somewhere presumably convinced him would keep certain types of voters on board.

But in a speech in Birmingham today, there’s another Keir Starmer on show – the usual one, who says things with moral and technical meaning and is clearly following an agenda designed to restrain executive power on Brexit. This version of Keir Starmer – let’s call him Starmer Prime – has an excellent idea. He is going to try and control what would happen if parliament votes down the Brexit deal in the autumn.

The key moment in the Brexit debate takes places when the deal secured in Brussels comes back to parliament. Starmer’s conditions – although not necessarily Jeremy Corbyn’s, whose mind is a mystery – make it almost impossible to see Labour voting for that. He wants the “exact same benefits” as single market and customs union membership, which the government is not going to get.

If Labour opposes a deal bringing back a Canada-type goods arrangement, the votes are probably there to defeat it. All opposition parties would support them, apart from the DUP. A handful of their MPs – Frank Field, Kate Hoey, maybe one or two others – might rebel against the party whip, but the rest would hold tight. That would leave just a few Tory moderates needed to defeat the bill.

The question is what happens then. The chances are Theresa May would have to resign. The ensuing leadership contest would mean that the government should really be asking for an extension to Article 50 , but there is no guarantee that it would do this, nor any sense of who would be in a position to do so. Or the Conservatives themselves could fall apart, with or without a formal confidence vote, and a new election be required.

It would be a profound moment of chaos. But who knows? May has survived events which should by any right end a prime minister before, like the election fiasco. She survives because the Brexit press will uphold any set-up which delivers the outcome they want. The Fixed-Terms Parliament Act makes it difficult to see how the Conservatives fall unless they completely disintegrate. Under its terms, it would require a formal vote of no-confidence, in which those Tory rebels which defeated the motion would presumably return to the fold.

The outcome of a defeat is impossible to predict. It’s like that bit in a sci-fi film where, for reasons of plot, the person who can see the future warns that something is blocking their vision. It is a massive black hole of chaos sitting in our near future, which no analyst or expert is able to fully describe.

That’s why the leadership is already planning how to control it if things go wrong. Brexit minister Lord Callanan said last week that a vote against the motion would be “an instruction to move ahead without a deal”.

Of course, this makes a nonsense of the Conservatives’ commitment to a “meaningful” vote on the final deal. There is no meaningful vote between no-deal and a deal, no matter how bad that deal is. It is like choosing between a film you don’t want to see and being shot in the face. Your decision to go see the film does not mean you are happy with it. It simply means you don’t want to get shot in the face.

This is precisely what Starmer Prime is now trying to control. He plans to introduce an amendment to the EU withdrawal bill creating a statutory provision that it is for parliament to say what comes next if the motion is defeated, not the government. He wants to take the response to the defeat out of No.10’s hands and back to the Commons.

The government response was revealingly weak.

“Parliament, including the Labour party front bench, voted overwhelmingly to trigger Article 50 and did so in the knowledge that there would be a meaningful vote in both Houses,” a Tory spokesperson said. “Once again, this is just Labour seeking to frustrate the Brexit process, coming as they refuse to rule out a second referendum.”

This is revealing. It’s not a functioning argument. If anything, it is an argument against the Tory position, because a meaningful vote is impossible under the terms they have set for it. It shows how little they have in the rhetorical armoury to respond to moves like this.

There is decent chance that enough Tories would vote for this amendment. It is sensible, it appeals to the ‘take back parliamentary control’ principles the referendum was based on, and it targets the exact moment of future political chaos when legislative control will be crucial.

It’s the product of smart opposition. More of this please. And less nonsense about passports.