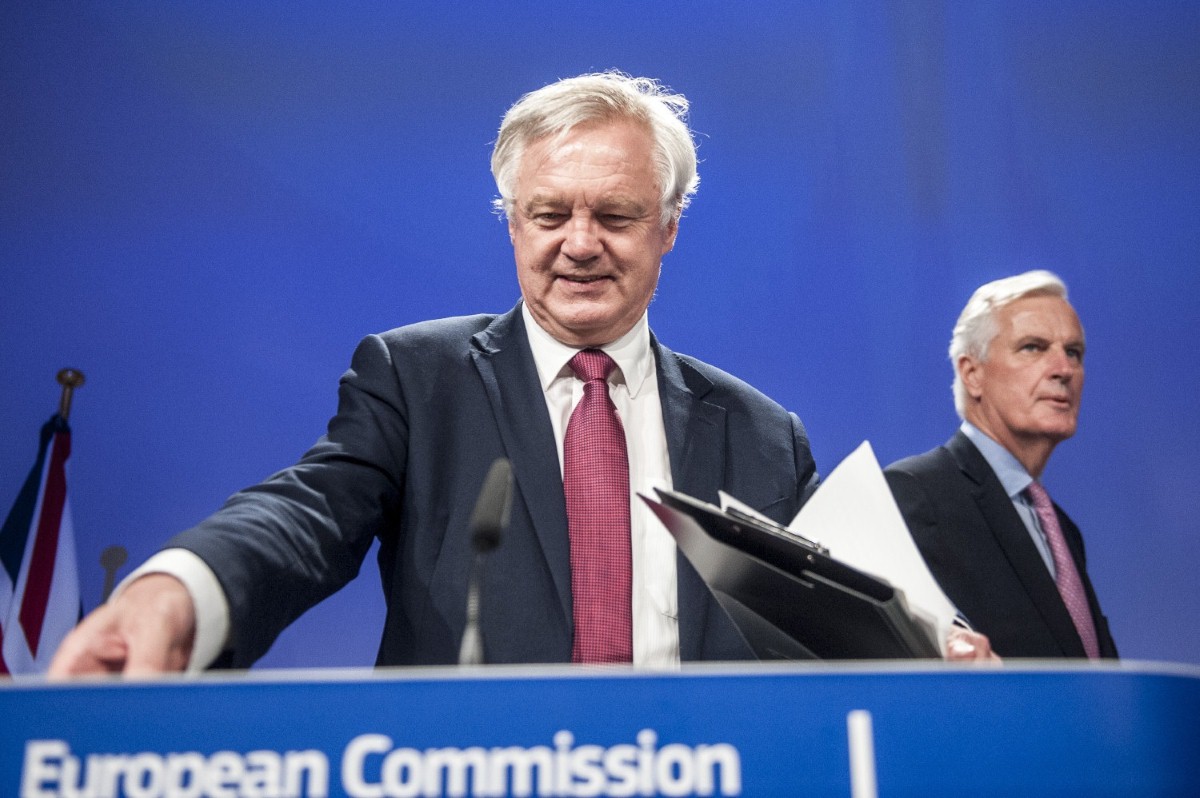 Things are going OK, right? We've got that first-phase agreement. Next they'll talk transition and then a trade deal. Maybe everything's going to be alright.

Hah, you poor fool. No, we're still screwed. Take a closer look at that first-phase agreement. It's a tremendous fudge. It took the major problem at the heart of Brexit and kicked it into 2018.

We've been given a hospital pass by our past selves?

Exactly. It's like Back to the Future, but with trading jargon instead of weird incest subplots. The problem lies in Section 49, which you can read here.

Why don't you summarise it for me instead.

It pledges there will be no hard border between North and South Ireland. There are three stages to preventing it. First through the "overall EU-UK relationship". If that fails, through "specific solutions". And if that fails, through "full alignment" on the rules of the single market and customs union.

But just for Northern Ireland?

No, the deal also rules out a border between Northern Ireland and the rest of the UK, so any regulatory alignment here counts for all of us.

So the "overall EU-UK relationship" won't help. What about the "specific solutions"?

There aren't any. Brexiters like to say that they can avoid a border using a combination of technology and mutual recognition, but it doesn't hold up. Even the most frictionless borders in the world, like US-Canada or Norway-Sweden, have checks.

Leaving us with "full alignment".

Yep, except that no-one knows what that even means. It seems to suggest we'd unilaterally take on all EU rules, but that wouldn't really achieve much on its own. For it to keep the border open, we'd need EU-recognised monitoring, enforcement and dispute resolution systems. And by that point you've basically stayed in the single market and customs union.

Exactly. But that is clearly not what Theresa May's government has taken from it. She's currently talking about the 'three baskets'.

Probably not. The EU has been clear throughout they wouldn't allow cherry picking. And It's not clear they could do this even if they wanted to. Brussels has something called a 'Most Favoured Nation' clause in its trade deals with South Korea and Canada which seems to rule out May's plan. These clauses basically work like John Lewis price guarantees. They say that if the EU signs a deal with another country which is better than their ones, they automatically upgrade to hit that same level.

So anything they give us, they also have to give Canada and South Korea?

Yep. There's an exemption for countries like Switzerland or Norway which have full regulatory alignment but….

We don't want to do that.

Even though we seem to have signed up to it?

This is a mess.

It is. And at some point it cannot hold. If the government doesn't agree to full alignment with monitoring and enforcement, there will be a hard border in Ireland, which goes against the agreement. But if it does sign up to it, the Brexiters are going to absolutely lose their minds. At some point, something has got to give. By preventing this debate in December they've basically just kicked the problem into this year, when the consequences of talks breaking down are even more severe.

It's not clear. Britain is hoping to agree the terms of transition in March, but Europe expects it to be more like summer. Then they have until October to write up a broad description of what the future trade agreement will look like. This will then be turned into a trade deal and ratified during transition.

I thought May and David Davis said the trade deal would be ready to go by the time we left in 2019?

Yes, it turns out they were wrong about that. Contain your surprise.

You call it a fudge, but it feels like the UK has been boxed in here. Section 49 forces them into soft Brexit, doesn't it?

It seems to, but at the moment each side is applying its own interpretation to that section. It's a classic negotiating fudge. The Brexiters' mission is keep the fudge going past March 2019.

What do you mean?

The description of the future trade deal in the Brexit withdrawal agreement will be very vague. The question is: Exactly how vague? If Brexiters can keep the fudge going past the official point of exit, they'll have prevented the ensuing political crisis from exploding until it's too late.

Is there any chance the EU would allow the fudge to stretch past Brexit day?

Some analysts and politicians think so. Shadow Brexit secretary Keir Starmer told Labour MPs this week that we'd only know what 'out' looked like "at 2021 at the earliest". But most observers doubt it. The EU would be throwing Ireland to the wolves. Its economy would be hammered and the promises of solidarity it had received from the EU would have been shown to be meaningless.

So we're heading for a summer showdown.

Yep, but not before a transition showdown.

There's nothing more sexy than a transition showdown. I thought everyone was on the same page on this. It'd go on for two years and we were going to keep everything as is.

There are still difficulties. We need to address the deals the EU has with other countries. These go from full free trade deals with countries like Canada, to smaller trade agreements, to treaties guaranteeing regulatory cooperation on things like aviation and nuclear regulation. All told there are about 750 of them.

I thought Liam Fox said he'd get all this sorted?

Yes he did. It may or may not surprise you to learn that that was all nonsense. London is going to have to convince Brussels to help.

Will that be hard?

Hard but not impossible. Brussels has selfish reasons to want the deals to roll-over. German manufacturing, for instance, occasionally relies on goods going from the UK to South Korea under an existing trade deal. But we're going to have to go cap-in-hand to the EU again, after months of Fox's demented chest-thumping. The two sides can then present a united front to other countries and face down any complaints from those demanding a trade remedy.

Doubtful. Europe knows it has us over a barrel on avoiding a March 2019 cliff edge, so member states are likely to start ratcheting up the demands on transition. Many of them are baffled as to why Brussels offered it at all, given that it reduces their time advantage.

Wouldn't it be easier just to extend Article 50?

In a logical world, yes. We'd still be an EU member, so those third party deals would stay in force, and neither side could add any new requirements. It would also be easier to extend in future if talks needed more time. But this has very little support on either side. To the Brexiters, any delay to the date of eventual departure is unacceptable and Brussels wants us out before the next round of European elections.

Yep. Both sides are also being foolish on the length of transition, which they want to hold to two years. For Brexiters, it speeds up their great historic project. For Europe, it means we're out before the next financial cycle kicks in. Trouble is, it's very unlikely to get done in two years. Even if Britain accepted all the requirements of the Norway or the Canadian model without any debate at all, it would still require many legal and technical changes and an extensive ratification process, probably involving every EU member state and some regional parliaments.

OK, so this is just talk then – they'll get to the end of 2020 and then just extend the thing again.

That's likely, but there will be problems. The EU has the power to decide transition terms under Article 50. But any extension requires a new power, called a "competence". That means authorisation goes back to member states. Britain's fate would be in the hands of European politicians who by this stage may have lost patience with Brexit, if they haven't already.

Great. Don't suppose we could, you know, stop Brexit by any chance?

There are two possible scenarios that could happen. Either the deal the government negotiates is voted down in parliament, or it's passed with an amendment for a referendum on the final terms.

If they vote down the deal, surely we just leave the EU with nothing.

That's what Davis says, but it's not necessarily true. Rejecting the deal would trigger a spasm of chaos in British politics. May would have to stand down and the government would probably collapse. A new government, or coalition of MPs, could end up going to Brussels to ask for more time or maybe to revoke Article 50 altogether.

True, but at that stage everything is unprecedented. Remember that the government has promised MPs a vote before the European parliament holds theirs. And Europe is planning to wrap up talks in October, so there's potentially six months to play with.

What are the chances of the deal being voted down?

Difficult to say. There are a lot of known unknowns. Labour says it will only support the deal if it delivers the exact same benefits as single market and customs union membership. That would suggest that the only way to get them on board would be to take the phrase "full alignment" at face value. But doing so would lose the support of Brexiters on the Tory benches, especially if they believe voting it down would result in leaving with no deal at all.

And even if Labour votes against the deal, it would need the support of all opposition parties – minus the DUP obviously – and several Tory rebels to succeed.

It is, but also perfectly possible. Things will become clearer as we get a better sense of what the deal looks like. The vaguer the description of the future relationship, the easier it will be for the government to present it as all things to all people. The more specific it is, the more people on either side will fall away. In a way, it's a battle for specificity.

What happens if the deal passes through parliament?

Then there'd be just one chance to stop Brexit – an amendment in the legislation saying that there should be a referendum on the final terms. Some senior figures in the party believe this is Labour's secret battle plan, although the leadership don't seem keen on it.

Would there be time for this?

Probably not. Davis' commitment to an early vote only applies to a motion, which can't be amended. The primary legislation would come much later – almost certainly too late for a referendum to be held.

That kills off the whole idea doesn't it?

Maybe. But there are other ways to securing it, perhaps by an amendment to another bill. However, all that relies on a strong sense of public opposition to the deal. There are signs of public discomfort growing, but we're not there yet. It'd need to get much stronger for it to translate into action in parliament.

It's going to be a long year.

Well thank heavens for that.