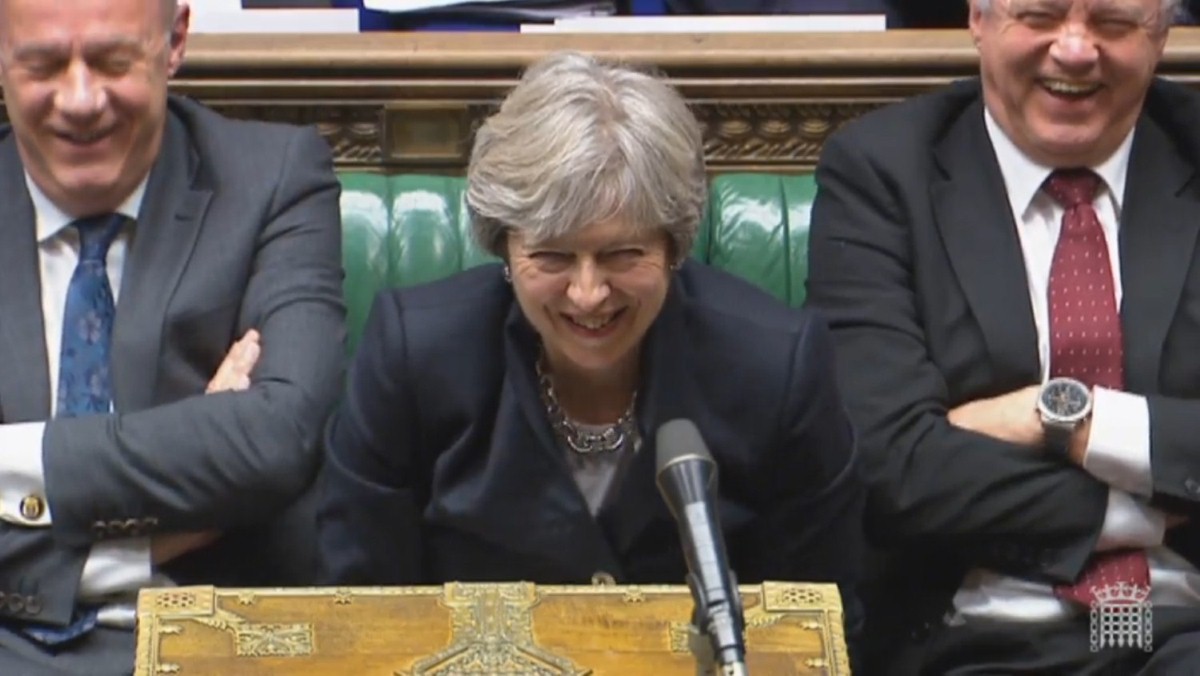 Quite apart from anything else, Theresa May's government is guilty of crimes against language. Her statement in the Commons today took her Florence speech and contorted it so violently that no sane person could possibly have understood what she was trying to say.

Back in Italy, she'd promised that Britain would accept all EU rules during transition. Occasionally, she reiterated that today, saying: "We expect that the implementation period will be based on current rules and regulations."

That means European Court of Justice (ECJ) jurisdiction would continue, freedom of movement would continue, and the rules of the single market and customs union would continue. After all, that's the point – to minimise disruption to business and avoid the cliff edge. There's no time to negotiate a bespoke transition and no interest in doing so in Brussels. Her admission of this was one of the first moments of realism from her since she'd entered Downing Street.

But if that's the policy, how come her ministers are saying that in 2019 free movement will end and Britain will leave the single market and customs union? After all, these certainly come under the "current rules and regulations" of the EU.

If you are confused by this, it is because you have an overly traditional belief that words have meaning and that political speech should be comprehensible to voters.

Here and there, May sprinkled crucial little caveats into her speech. Freedom of movement "as we know it" will end in 2019, she said. The words just popped up there at the end of the sentence, smiling innocently. What this probably means is that the UK government will try to register EU migrants coming after that date. In fact, this is entirely within EU rules. It is so entirely within EU rules that the UK is one of the few EU states which has not done it.

Then came the nonsense on the single market and customs union. We would be leaving "full membership" of these two systems, apparently. We would then be able to make "practical changes" to the system as we approach "the end state" of the transition period. This seems limited to setting up a new arbitration system.

In all likelihood, it's the former. Free movement will continue as before, with the government using registration to pretend something has changed when it has not. We will abide by all customs union and single market rules, with the government using it's disingenuous formulation of "full membership" to pretend something has changed there, when in fact it has not.

There's one offer to the Europeans, on consistency. There's another offer to the Brits, on change. And by abusing language into meaninglessness, she hopes to refer to both things at the same time using the same words.

The only other interpretation is that May actually believes this stuff. She really thinks she can move on from phase one of negotiations, which the government shows no signs of achieving, then negotiate one of the most complicated and far-reaching trade agreements the world has ever seen, and then agree a bespoke transitional deal. All before October 2018, when talks end and go to the European and British parliaments for approval.

Presumably she does not believe this. Presumably she knows that the trade deal will take many more years than that and that the only transitional period possible is one which keeps things exactly as they are right now. If not, we're really in trouble. It's far better to have a cynical prime minister than a stupid one, although one should not rule out the possibility that we've been landed with both.

Regardless of what she's playing at, May continues to make the same mistake she has made many times before. It is a revealing mistake, because it suggests that she believes she's living in the 1950s, which indeed seems to be her preferred cultural destination. The mistake is this: She behaves as if the internet does not exist. Her strategy seems to presume that European leaders cannot see the things which she says in Britain. But they can. They can see everything.

So when May tries to mislead her British audience, that is heard by Europeans too. They can hear this nonsense about ending "full membership" of the single market and the wibbly-wobbly garbage about free moverment. The offer May made in Florence therefore sounds like it is being rescinded.

It's really not clear who May is fooling here: her MPs, the British public, European officials or herself. Maybe it is everyone all at the same time. In Florence she made a commendably simple and realistic offer to kick-start talks. That realism and simplicity is now lost. No wonder the government is starting to plan for no-deal. Its own actions are making it all-but inevitable.