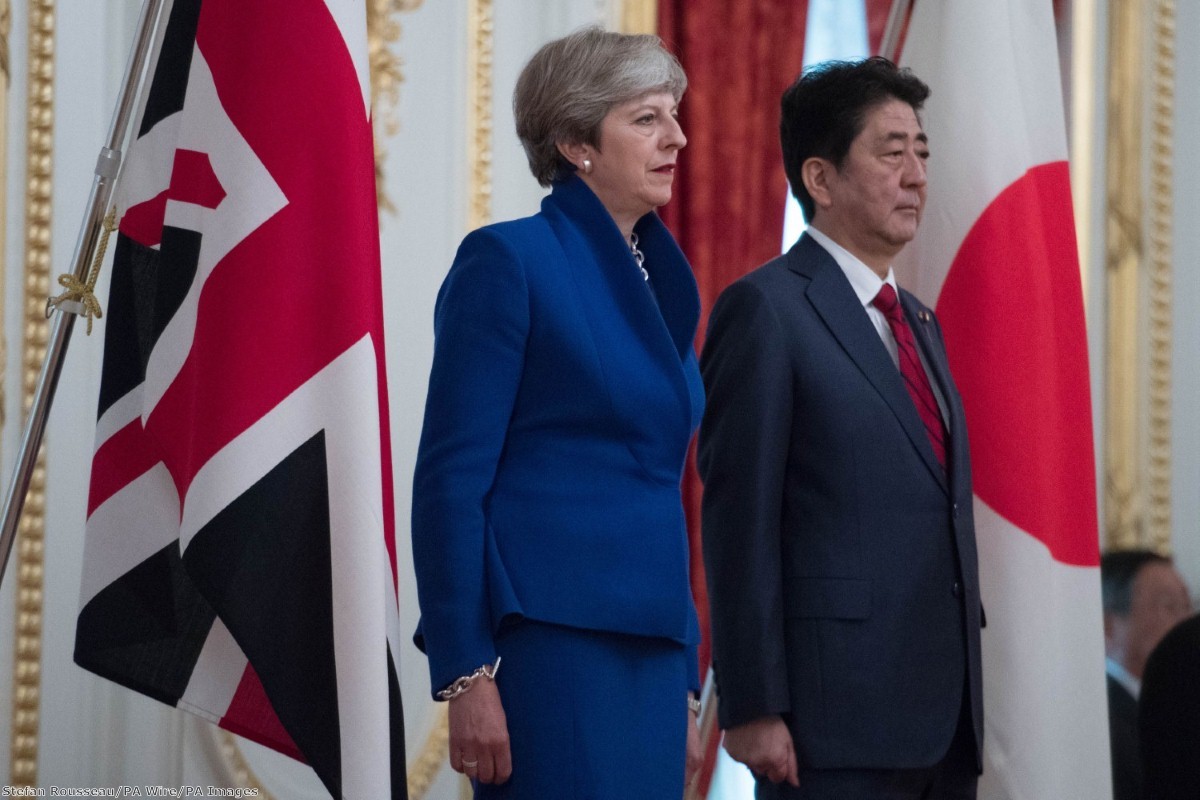 One of the core Brexit arguments was that outside of the EU we could negotiate our own trade deals. We wouldn't have to sit with 27 other nations anymore, trying to construct a uniform trade policy between such disparate economies. We wouldn't have to be hobbled by the political need to protect things like oranges, which we don't care about, and could focus on things like financial services, which we do. Britain would be unleashed, a roaming imperial tiger on the global stage.

So it's worth taking the example of Japan as a test case for how this mission is going. Theresa May arrived in the country yesterday, trying to put a brave face on it. To be fair she's been trying to put a brave face on all manner of things for several months now. If anyone's an expert at pulling a brave face, it's her. But no matter how much practice she's had, the trip looks dreadful and embarrassing. Before she'd even arrived, Japanese officials informed journalists that a trade deal with the UK would take a back seat to one with the EU.

It's not as if they haven't been clear from the start. In September 2016, when it was becoming increasingly clear that May's version of Brexit would involve leaving the single market and customs union, they wrote an uncharacteristically forthright letter to the British government.

"There are numerous Japanese businesses operating in Europe, which have created 440,000 jobs," it read. "A considerable number of these firms are concentrated in the UK. Nearly half of Japanese direct investment intended for the EU in 2015 flowed to the UK. We strongly request that the UK will consider this fact seriously and respond in a responsible manner to minimise any harmful effects on these businesses."

The Japanese were pissed. And for good reason. Over the last few decades their firms were lured to Britain, by Margaret Thatcher and others, with the promise that they could use it as a beachhead into Europe. The single market meant they could set up shop in the UK and sell anywhere, even into those countries like France which had seemed averse to their presence and protective of their own domestic industries.

Now that is all being put at risk by the frenzied demand to leave the single market. What this highlights is the other side of the trade compromise. Yes, EU trade deals are nightmares of competing interests, with disparate economies painstakingly trying to come up with a position which can be accepted by everyone. But the advantage is that you have the heft of half a billion consumers behind you. That's the core proposition which brought the Japanese to the UK in the first place and it is what is leading them now to prioritise an EU trade deal over a UK one.

May's response to this statement was extraordinary. "I believe we can look at an EU-Japan deal as the basis for a future trade deal between the United Kingdom and Japan," she said yesterday, ahead of talks with prime minister Shinzo Abe.

She is proposing that the Japan-EU trade deal be the model for the Japan-UK trade deal. In other words, we're so desperate we're going to copy-and-paste it.

Look at how quickly and violently the Brexit promise has been downgraded. They have gone from promising bespoke British trade deals to admitting they'll just copy the hated EU ones.

At first sight, that seems like a continuation of the status quo. In the EU, we'd have had access to the Japanese trade deal. Outside of it, we'll just sign up what we'd have had anyway. But actually it is much worse than that. If we'd stayed in the EU we'd have been part of the negotiations over that trade deal. Our economic needs would have been a significant factor in what it contained. But outside, we are irrelevant to the discussion. We do not feature. And yet we are still going to adopt that deal as the model for our own.

Brexit has achieved precisely the opposite of what it was supposed to do. It hasn't boosted British influence. It has negated it.

May's answer to this was magnificently inane. "Even if we start on the basis of an existing trade deal that a country has with the EU," she said, "it will be up to the United Kingdom and that country if we wish to renegotiate and change those terms in the future."

May either does not understand how trade deals work or is actively trying to mislead the public, but either way she should clarify this statement with her Japanese hosts immediately or her promised trade deal will become even more untenable

Trade deals are very rarely – if ever – opened up once they are signed. The only obvious case is Donald Trump's attempt to renegotiate Nafta, in which he has the might of the US economy behind him. And even then it'll probably fail.

If you go into trade negotiations saying that you might reopen this deal as soon as you're bored of it, you can't be taken seriously. You're not negotiating in good faith. Trade deals are set down in law with dispute resolution systems. They are the foundation for countries' ongoing economic relationships, not a distracted text message about your plans for the weekend. If your negotiating partner does not believe that you'll stick to the final deal, there is no reason for them to dedicate resources towards negotiating it.

So here we are. The promises of the Brexiters are in tatters, their aspirations are achieving the precise opposite of what they were supposed to do, our prime minister has been forced into logical contortions which radically discourage our trading partners from negotiating with us in the first place, and it is all taking place amid the backdrop of the country being humiliated on the world stage, going cap in hand to people who inform us ahead of our trip that we're ultimately of little consequence to them.

Get used to it. There is plenty more of this to come.