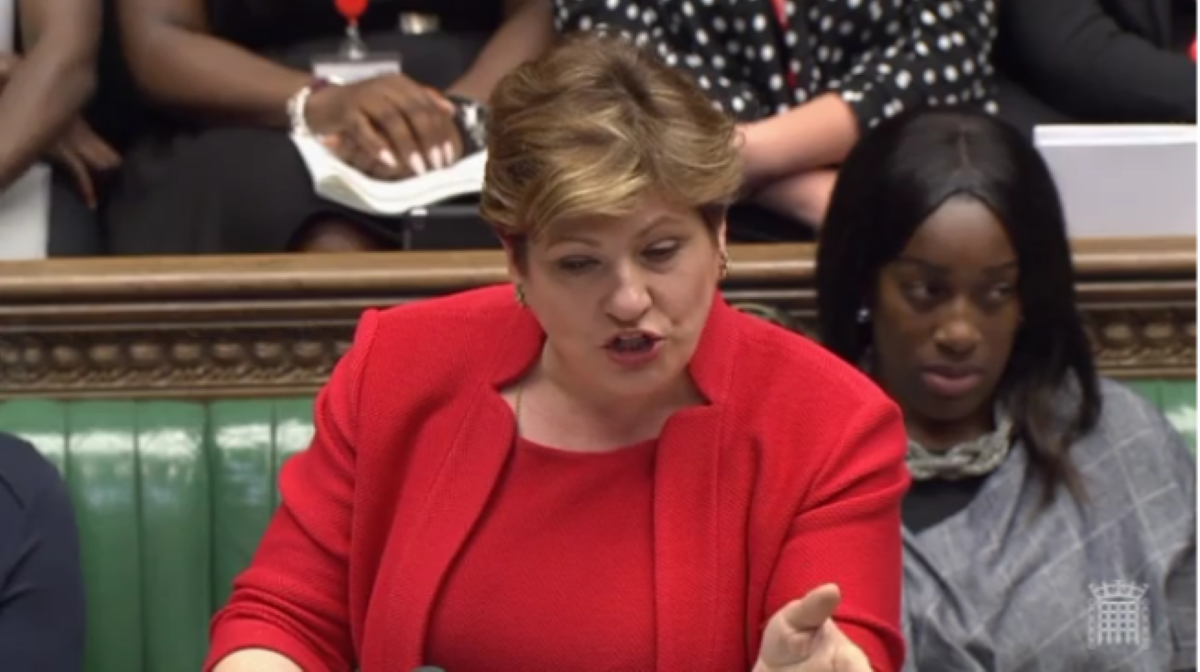 Emily Thornberry had a good time at PMQs this afternoon. You can see why some Corbyn supporters used to speak of her as a replacement when things were going badly for him. She certainly gets how to dominate the session – she's theatrical, clearly enjoys herself, can think on her feet and has a dry wit. Her attacks on the government's chaos over Brexit were well placed. It's just a shame that they are made so cynically while ultimately supporting the same policy.

The Labour stand-in focused her fire on the government's confusion over a no-deal. It used to be a centre-piece of Theresa May's tonal portfolio, a badge of nationalist self-belief. Since the election, it has rather faded away. Ministers occasionally pay lip service to it, but they know it isn't viable. The gap between that knowledge and the need to pay lip service is where Thornberry did her best work.

"What will happen to the Irish land border if no deal is reached?" she asked.

Damian Green, standing in for the prime minister, had no answer, just saying it was essential "we get that right".

"My question was not what deal do we hope to get, but what happens if we get no deal at all?" Thornberry responded. The chancellor had now said no-deal would be "a very, very bad outcome". Was it still government policy?

Green – a decent and sensible man who presumably knows he's speaking nonsense – tacitly confirmed it was.

"What does no-deal look like in practice?" Thornberry replied.

The answer was typical vacuous nonsense. "We are seeking a good deal," Green offered. He then spoke some further desperate rubbish about a trade deal with Australia. "Her fear of no deal is probably overstated," he finished. It wasn't clear if he meant that the outcome wouldn't be that bad, or if it was unlikely. The first is false, the latter increasingly true.

"Will he confirm a plan for no-deal exists?" Thornberry asked. There has been some confusion recently about whether there are preparations for this outcome. The lack of a plan for no-deal is one of the things which most horrifies civil servants. They have never come across a political problem in which you do not plan for the default outcome. It is unheard of. And to not do so for an event which would affect every part of British society is grotesquely irresponsible.

Green's answer was very interesting. "The OBR [Office of Budget Responsibility] is publishing its fiscal risks report tomorrow," he said, "so if she can be patient she will see the report she wants".

This suggests we are finally about to see an assessment of what will happen if talks break down or we walk out. It could be a crucial event. Or perhaps he was fobbing us off. We'll find out tomorrow.

Thornberry was focused, funny, effective and good-natured throughout. You got the sense her and Green get on rather well. David Davis, who was the subject of at least one of her jibes, was openly laughing at many of her jokes. It was PMQs at its best – adversarial but not personal, with content alongside the theatre. After the horrible weekly drudgery of Corbyn vs May, it was a breath of fresh air.

Nevertheless, it was revealing that Thornberry focused on the no-deal aspect of Brexit, because this is one of the few areas where Labour's position is much better than the Tories'. The party ruled out no-deal in its manifesto, meaning there was no scenario under a Labour government in which Britain would inflict this type of damage on itself.

This is very welcome indeed. But elsewhere on Brexit policy, Labour is playing the same tawdry games as the government. It pretends it can enjoy the exact same benefits of the single market outside of it, which it cannot. It seems prepared to possibly leave the customs union (their policy on this is typically unclear) but has no answers on how it would then prevent a hard border in Ireland or protect British firms from the crippling bureaucratic requirements of country-of-origin checks. The list goes on and on.

In reality Labour follows broadly the same policy as the Tories: constructive ambiguity. Or, to put it better: weaponised vacuity. Just like the Tories, Brexit cuts right across its parliamentary and voter support, so it trades in tone and intuition rather than details. At the moment, Labour is keeping its internal coalition of Remainers and Leavers together while the government is struggling. So the party policy is to let the Tories have it.

All very good politics, of the sort the Blairites would once have approved of and which Corbyn used to decry in favour of principled opposition. But it betrays the lack of content behind events like today. It is satisfying to watch Thornberry pick apart a nonsense approach to no-deal with the contempt it deserves. What is less satisfying is knowing that Labour only does so out of cynical party-political advantage and without any alternative plan of its own.

Update: Shortly after PMQs, the OBR tweeted: "Just to be clear, we are NOT assessing 'no deal' and other possible Brexit negotiation outcomes in our Fiscal Risks Report tomorrow."