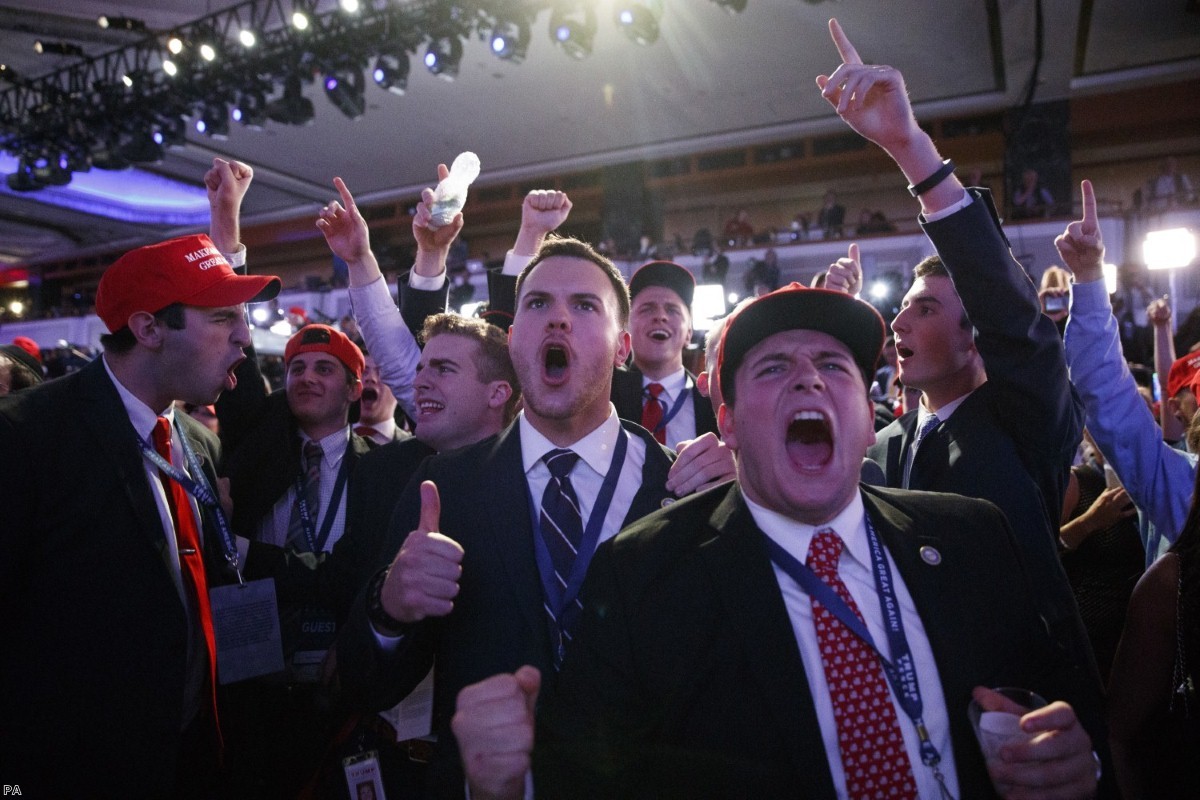 And it is a message that is being heard. In the hours that followed Trump's victory, congratulations stormed in from all of the biggest figures in the global nativist right, from the KKK, to Ukip, to the French Front National.

"I hand over the mantle to @realDonaldTrump! Many congratulations. You have fought a brave campaign," crawled Nigel Farage this morning.

I hand over the mantle to @RealDonaldTrump! Many congratulations. You have fought a brave campaign. pic.twitter.com/txD3RFMQ2l

"Their world is collapsing. Ours is being built," Tweeted Front National vice president Florian Philippot.

And collapsing it truly is. In recent years the Western centre left has lost pretty much every battle it has fought. From the fall of centre left governments in Europe, to the triumph of Brexit, to Trump's victory, the populist anti-immigration right is on the march and the left is in almost total retreat.

In the UK there has been a surge in hate crimes against minorities at the same time that the incoming government has floated some of the most disgraceful anti-immigration policies seen in recent times. Meanwhile, anyone dissenting from this new anti-immigration, anti-refugee consensus, has been singled out as enemies of the people by an increasingly hardline, hard-right press.

And this has all happened at the same time as Britain's main opposition party has descended into civil war and irrelevance. As things stand, the Labour party (and the wider left) are just one snap election away from total wipeout. Right now, the only thing delaying the complete domination by the right in British politics is the whim of just one woman sat in Downing Street.

Worst of all, this retreat has been away from a movement that is led by some of the least popular, least competent and most divisive politicians around. In recent months Donald Trump has been accused of sexual assault, bullying and fraud. He has offended pretty much every demographic apart from white men, while giving all the appearance of being a fully-blown sociopath. And yet despite all of this, the left were still unable to beat him.

Similarly in the UK, a group of some of the most unpopular and unattractive politicians in the country successfully led a campaign to take Britain out of the EU, despite all the overwhelming evidence that it would place the UK into years of political and economic turmoil. Following that result, Nigel Farage, who previously failed to be elected no fewer than seven times, has become a pin up for the global nativist right with one foot already firmly inside Trump's White House.

That this has all happened says less about the bigotry, or even idiocy, of the UK and US electorates, than it does about the utter inadequacy of the left. In both cases the left failed to find a response to, or even realise the existence of, the overwhelming defeat that was heading their way. In both cases, years of complacency and insularity blinded us to the forces marching towards us, even as the heels of their boots crashed down on our heads.

If such complacency could be forgiven then, it can certainly be forgiven no more. Trump's victory must be a wake-up call for everyone on the left. Unless it gets its act together then it will soon be out of the act altogether.