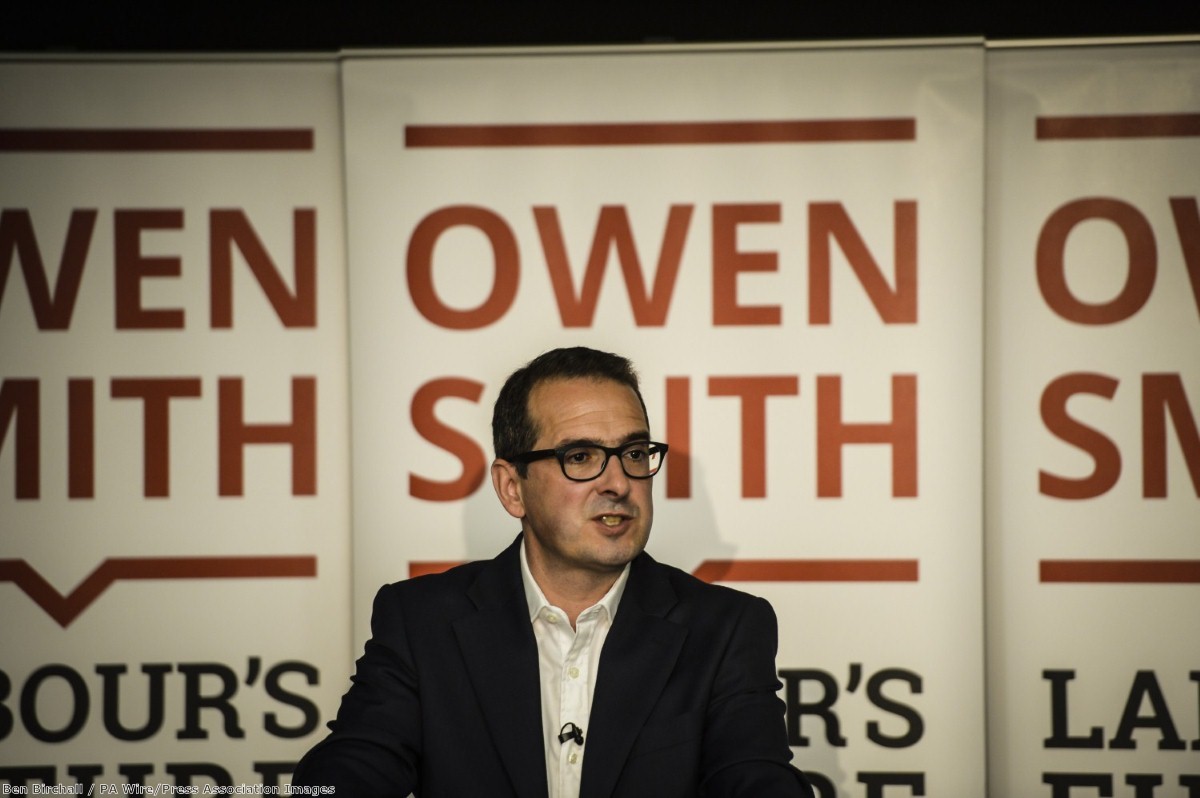 Owen Smith is wrong about a great many things and laughably inept at a great many others but he deserves praise for his approach to Brexit. Speaking on BBC radio this morning, he said that under his leadership Labour would oppose the triggering of Article 50 in a Commons vote (assuming there is one) unless certain conditions were met.

He was met with the customary response, which is that he is trying to circumnavigate the will of the people. His reply was very sensible. Labour would oppose any settlement which made working people worse off.

"Theresa May says that 'Brexit means Brexit' – but nobody knows what Brexit looks like. It could involve trashing workers' rights and environmental protections, opening our NHS up to foreign competition, making it harder for us to trade with our neighbours and damaging our economy. Under my leadership, Labour won't give the Tories a blank cheque. We will vote in parliament to block any attempt to invoke Article 50 until Theresa May commits to a second referendum or a general election on whatever EU exit deal emerges at the end of the process."

In contrast, Jeremy Corbyn's camp, who demanded we trigger Article 50 the day after the referendum vote and who can barely contain their glee at Brexit, want to "work with" the result of the referendum.

The Corbyn policy tacitly supports the most right-wing elements of the Conservative party and lends a helping hand to those who would dismantle the workers' rights they claim to care about so much.

As Smith says, Brexit is not a thing. It is an infinite variety of options. And that doesn't just mean the standard menu of EEA, EFTA, Canada-style trade deal or WTO. If we go for a hard Brexit, as right-wing Tories are demanding and some media reports (probably wrongly) suggest No10 is considering, many other options are on the table. Basically, the entirety of British law over the last few decades is up for grabs, in a bonfire of legislation. This is nothing less than an opportunity to reshape a country, and only the right-wing of the Tory party seem to recognise it.

It will touch on every aspect of society: workers' rights, environmental rules, chemical standards, data protection, pharmaceutical laws, veterinary training levels, meat processing regulation, age-related discrimination: all of it. If you can think of it, it is available. Everything is on the table, because all of it is entwined with European law or single market rules.

Saying Labour is going to "work with" the result doesn't mean anything, except that the Tories basically get to decide all this by themselves.

Smith's approach is far wiser. It says that Labour support – which is rather pivotal for a government faced with rowdy backbenchers and a majority of 12 – is contingent on certain factors. These should include the factors Theresa May has already singled out as important: Scotland's agreement – or at least acceptance – of the deal, ensuring that borders do not return to Ireland and that the Good Friday Agreement survives the Brexit process. There should also be a condition on Gibraltar.

But it should also, as Smith implies, have economic conditions, as Gordon Brown used to restrain, and ultimately prevent, Tony Blair's efforts to adopt the euro. Broadly speaking, these tests should say that the deal will not impoverish working people or significantly endanger the economy. And it should involve some sort of democratic mandate for the final deal, either in the form of an election or a second referendum.

These are democratic locks ensuring that Brexit is fair, that it reflects the will of the public, and that it does not have catastrophic legal and economic consequences. Anything less is a betrayal of the opposition's role and function and of the working people Labour is supposed to represent.

You can have all manner of Brexits. Corbyn's Brexit is a relinquishing of duty tantamount to the encouragement of a Tory Brexit. Smith’s Brexit ensures that, if it happens, it will happen in a tolerable and responsible way.

Old Bexley and Sidcup by-election: Should the Conservatives be worried? Blair urges Starmer to reject ‘wokeism’ and push back against far-left Priti Patel disinvited from Calais talks after PM suggests 'readmitting' migrants to France
Url Copied