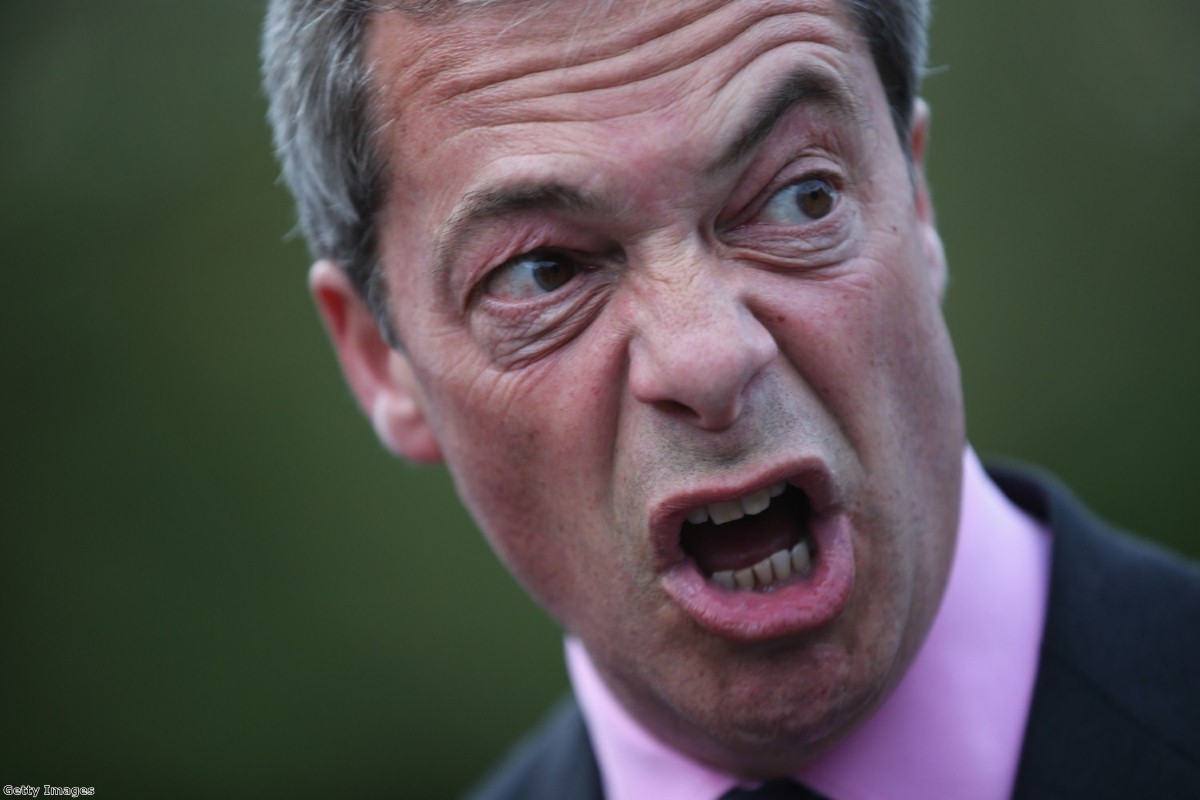 Whenever things are going badly for Ukip, Nigel Farage's cheeky chappy persona slips, and a rather more snarling and unpleasant character is revealed.

Today was one such occasion, after the party's heavy defeat in the Oldham West and Royton by-election last night.

Before last night, Farage predicted that Ukip would come "within a few hundred votes" of Labour in the seat and could even win it. In the end they fell short of victory by over 10,000 votes with Labour significantly increasing their share of the vote from last May.

However, rather than seek to understand why the people of Oldham had so roundly rejected his party, Farage instead decided to suggest the result had been "bent" by ethnic minorities living in the area.

In multiple interviews, he insisted that mass immigration and the increase of ethnic minorities meant democracy had "died" in parts of Britain.

He repeatedly cited a report he claimed to have read in the Guardian last Saturday.

"The northern correspondent of the Guardian wrote last Saturday that she knocked on the doors of a street in Oldham where nobody spoke English, nobody had ever heard of Jeremy Corbyn, but they were all voting Labour," he told the BBC.

"So there is a very large ethnic vote in this country in our inner cities. They vote Labour indeed and in one of the boxes last night it was 99% Labour and almost the electoral process is now dead in those areas."

"What I'm saying is that mass immigration, the change to our demographics in Britain… is fundamentally changing politics. The system is widely open to fraud and there is an ethnic element to British elections which we've never seen before."

He also made the same claim on the Today programme this morning.

"There was an interesting report in the Guardian last Saturday where their Northern correspondent knocked on doors on a street and no-one spoke English. They didn't even know who Jeremy Corbyn was but they were going to vote Labour. So there are some really quite big ethnic changes now in the way people are voting."

Now before I get into the substance of Farage's argument, it's worth actually taking a look at the article he referred to in all his interviews this morning.

The Guardian's Northern editor is a journalist called Helen Pidd. You can read the article she wrote about the Oldham by-election last Saturday in full here.

As you can see, there is absolutely no mention of a street where "nobody spoke English, nobody had ever heard go Jeremy Corbyn, but they were all voting Labour."

There is a tweet Pidd sent separately in which she refers to non-English speaking Labour voters. However, there was absolutely no mention of an entire street of Labour-voting ethnic minority voters not being able to speak English either in her Guardian report or elsewere. Nor was this mentioned in any of the other reports Pidd filed from the seat.

Farage's story of an Oldham street filled entirely with non-English speaking, Labour voters is made up. There is no such street. There are no reports of such streets.

Also interviewed after the result last night was Ukip's deputy leader Paul Nuttall. Like Farage, Nuttall repeated the smear about postal votes and just like his boss, Nuttall provided no evidence. Instead he compared Oldham to Zimbabwe, telling the Mirror: "You have got to ask yourself – is this Britain or is this Harare?"

Now Zimbabwe comparisons are very familiar to anyone who has covered far-right politics in the UK. So let's not mince our words about this – this is the tactics and language of the BNP. Farage and his party are deliberately using invented statistics and race-based smears, in order to stir up racial tensions and exploit people's fears.

And instead of continually inviting him onto newsroom sofas to make these claims unchallenged, it's time the British press and broadcasters finally started calling him out for it.