Proposals to keep the London underground open 24-hours a day have been kicking around for years.

Various potential mayoral candidates and incumbents have raised the possibility, only for it to be quietly dropped later.

The reason for this is simple. Everybody thinks a 24-hour Tube would be a good idea, but nobody has so far been willing to pay for them.

Today's proposal is far more limited and as a result far more likely to happen. Under the plans, the Piccadilly, Victoria, Central and Jubilee lines and parts of the Northern line will stay open 24-hours at weekends from 2015.

Of course that's still a large chunk of the tube network and it would still cost a lot of money. And here's where things become tricky.

Fares on the underground have been rising above inflation for many years now.  Simply raising fares even further to pay for late-night drinkers would not be hugely popular.

Instead TfL plan to finance it by closing every single Tube ticket office. This is a dramatic change and will lead to hundreds of job losses.

In 2008 Boris signed a petition against plans by Ken Livingstone to close 40 tube ticket offices. Here's a picture of him putting pen to paper. 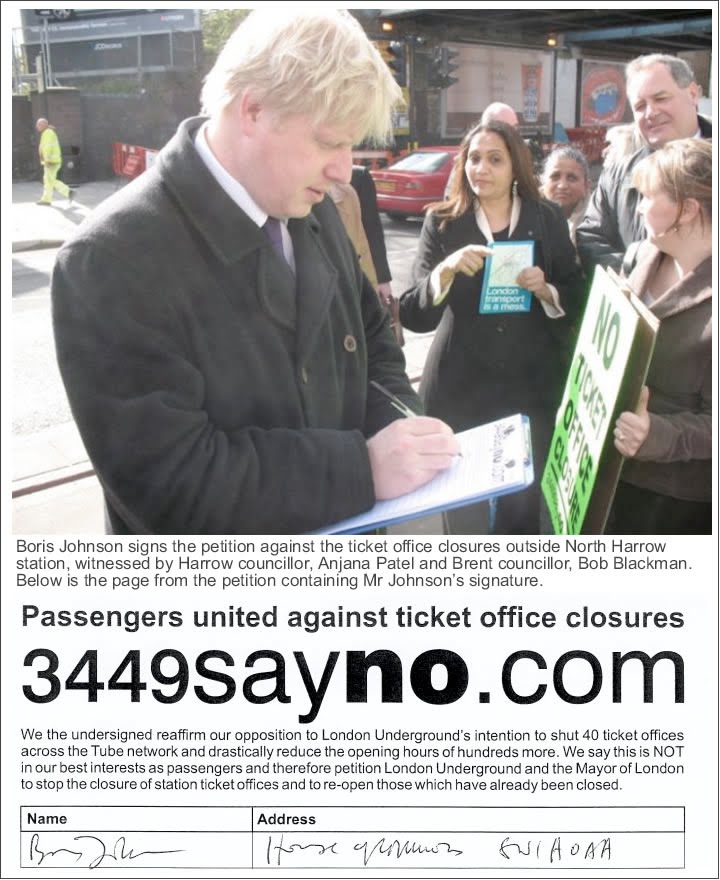 Since then he has repeatedly denied having any plans to close ticket offices, telling the London Assembly: "No ticket offices will be closed, alright? They're not going to be closed.

"The answer to the number of ticket office closures is: nil."

Of course the real answer to the number of ticket office closures was: "All of them".

In fact all along, Boris and TfL had continued to discuss ticket office closures, with tube unions repeatedly leaking documents setting out their proposals.

This is as clear a broken promise by Boris as Nick Clegg's tuition fees pledge, and equally as brazen.

And it's a broken promise that could cost him politically, as some recent polling has shown.

It is also arguably the right decision.

Tube ticket offices are used by a vanishingly small number of commuters, with many ticket office staff having little to do for large parts of the day. Physical tickets are increasingly a thing of the past with Oyster cards and contactless bank cards soon set to replace them.

The hundreds of people set to lose their job will see it as a disaster, but the millions of people able to use the tube later will benefit as a result.

Either way, these plans will come at a cost. Tube workers facing the prospect of hundreds of job cuts will not take this lying down and Londoners can expect months if not years of strikes and disruption as these proposals are fought.

Will it all be worth it? I guess that depends on how much you value taking a tube at four in the morning or how much you're willing to pay to keep your local ticket office open.

Either way the direction of travel on London's transport network is probably inevitable.

However much Labour may protest about the changes, Ken Livingstone would almost certainly have been announcing much the same today had he won in 2012.