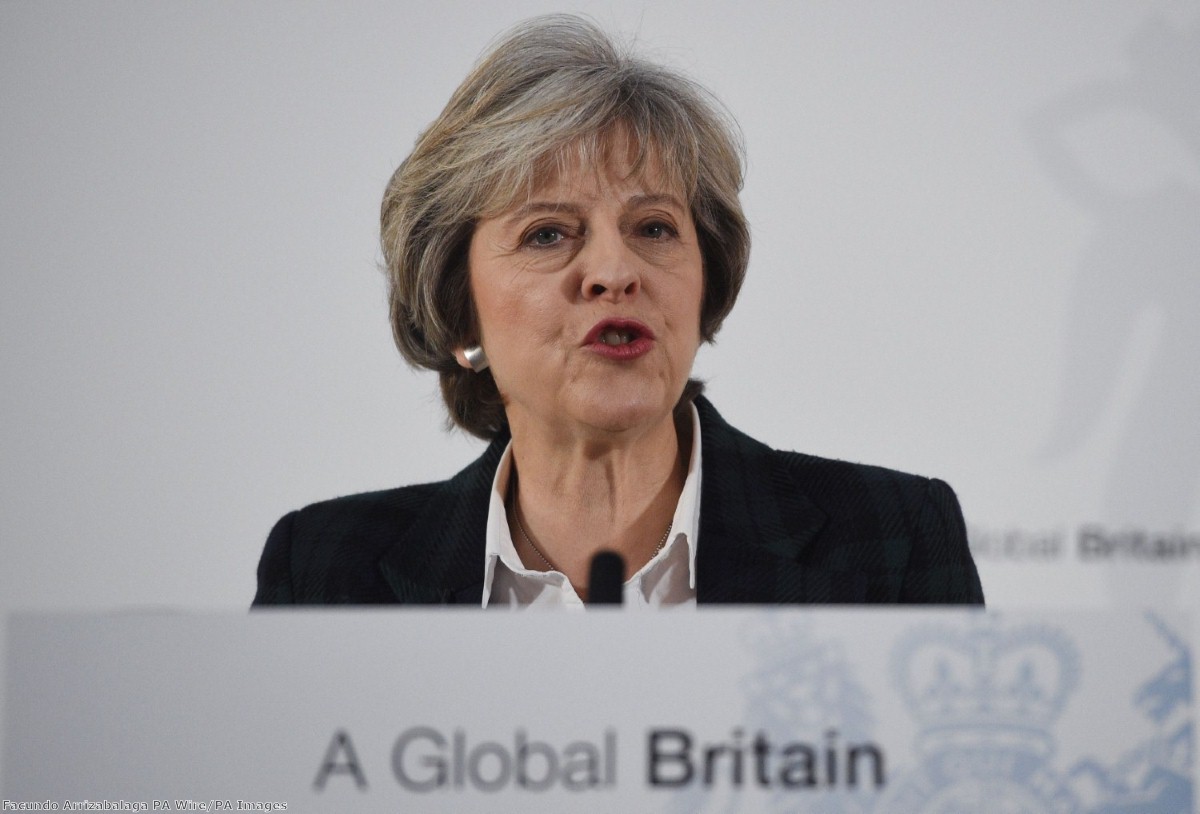 Lancaster House one year on: May has all her delusion and none of her power

Brexit sometimes feels like you're trapped in an experimental French New Wave film. The more dramatically it changes, the more doggedly it stays the same.

Since the referendum, the news has been unrelenting and Brexit developments have unravelled at a dramatic pace – but in essence we've been frozen in time since summer 2016. Brexit still means Brexit and – as imagined and dictated by the government – it still can't be done.

We recently had the first anniversary of the Lancaster House speech. This time last year, Theresa May was at the height of her power. She had surged to apparent invincibility on the back of unabashed nationalistic fervour at the party conference. Domestic ridicule was an unforeseeable disaster months into the future. Rather than mock, patronise or ignore her, as they do now, international leaders were genuinely concerned about the scale of her power and the damage it was set to wreak on Britain and its closest partners. Although she was as incompetent then as now, she had the capacity to dictate Brexit as she pleased.

As it happened, it pleased her to declare war on Remainers, Brussels and the British economy. The Lancaster House speech was the moment when she could have declared an ambition to remain in the single market, proposed a workable strategy for keeping the Irish border open, and squared with voters about the realities of a no-deal exit. Such a strategy would have marked the end of the post-referendum descent into jingoistic insanity,and heralded a new period of responsible policy-making and practical compromise, unshackled from the cakeist, hormone-drenched neo-imperialism of her vanquished leadership rivals.

Instead, she delivered a speech not for the 52% of Leave voters, but a hardcore division of Brexiters in her party and the right-wing tabloids. We were to leave the single market and the customs union. And if we didn't get what we wanted, we would shaft the EU by 'changing our economic model' – code for undercutting the continent by turning ourselves into a low-regulation haven for big business.  Assembled EU dignitaries in the room were left fuming and incredulous.

What before had been a nebulous calamity suddenly emerged in concrete. There was to be no compromise, pragmatism or reason. May did not simply possess total power, but combined it with total delusion and the promise of total economic ruin. And thus began the full nightmare of Brexit.

To wade through the speech a year on feels like an intrusion on private grief – not the prime minister's, but the country's. It is a testament to Orwellian doublespeak and, inevitably, the benefits of staying in the EU.

May declares she wants Britain to "emerge…stronger, fairer, more united and more outward-looking than ever before", even as she implicitly threatens to slash rights and regulations, dismiss and alienate the voters of Scotland and Northern Ireland, and impose barriers on our largest market. She extols the virtues of a "secure, prosperous, tolerant country – a magnet for international talent" while leaving the EU's security infrastructure, threatening thousands of jobs, and throwing millions of EU citizens into uncertainty about their status. To add insult to injury, she uses the phrase 'Global Britain' eleven times, as though the EU has kept the UK in a cage for 45 years and single-handedly blocked the resurrection of the rightful British Empire. It is one of the most pathetic and deluded speeches ever delivered by a serving British prime minister.

The problem is not simply the rhetoric, or the speed with which it collapsed into farce and rubble after the election a few months later. It is the semblance of order and strategy which revelled in its hollowness that day and retains every inch of emptiness now.

May pledged certainty to business and the public sector, proclaiming that "where we can offer that certainty, we will do so". A year on, the government still has no plan for what it wants or expects to be included in the transition, how much should be negotiated by exit day, or even the basic quality of the final trade deal. Indeed, it cannot spell out the meaning of the phase-one agreement it has already signed, with 'full regulatory alignment' dismissed by ministers as just another soundbite to add to the 'deep and special partnership' and 'leaving the EU but not leaving Europe'.

Astonishingly, May and David Davis are still telling MPs and voters that we will have a full trade deal wrapped up in the next nine months, despite knowing full well that even the most basic agreement takes years of hard and intricate negotiation. The only 'certainty' May has offered is that she is either inveterately deluded or pathologically dishonest.

Elsewhere in the speech, May promised control of laws, by leaving the jurisdiction of the European Court of Justice (ECJ); control of immigration, by leaving the single market; rights of EU nationals, despite failing to guarantee at that point that they would not be deported; new trade deals, by leaving the customs union; and free trade with European markets, by pretending that nothing had happened. Each one has since been rendered impossible by the phase-one agreement, or was guaranteed by our EU membership in the first place.

The phase-one deal, and the government's desire to participate in vital EU bodies, means that we will continue to follow, indirectly or directly, the ECJ. We will almost certainly have to stay in the single market and thus apply free movement of people. The prospect of meaningful trade deals has been demolished by the de-facto commitment to keep Northern Ireland in the customs union. Meanwhile the desire for EU nationals' rights, free trade with European markets and security cooperation is a reason to stay in the EU, not to leave.  Nothing we can achieve beyond the bloc can match what we found within it.

Even the most deliverable of May's stated objectives – a 'smooth, orderly Brexit' – is only possible if we pledge to apply the full body of EU law for several years, without any formal say in how those rules are made: the Brexiters' fantasy of a vassal state inside the EU finally made real outside it.

The difference between then and now is really the difference between rhetoric and action. While May's talking points have remained impervious to changing events and dawning reality, her actions have revealed her lack of leverage and the horror of a no-deal outcome. As the phase-one deal demonstrates, all the certainties are up for grabs. We will have a near status-quo transition. Free movement of people will continue after 2019. We will almost inevitably have to remain in the single market and customs union in the long term. We will never crash out without a deal. And given just nine months to agree an eye-wateringly complicated deal, we must also extend Article 50 to prevent chaos.

And yet, to repeat the prime minister's most famous coinage, nothing has changed. The government remains addicted to the same lies and delusions that powered it through the 2016 conference, Lancaster House speech and general election disaster. They still preach the doctrine of cakeism: exceptional Britain will be able to keep the Irish border open while leaving the mechanisms which guarantee it, retain jobs and prosperity while severing links to our largest market, and strike new trade deals that will be politically or legally impossible or both.

While the events of the last year have comprehensively shattered these myths, in the government they have simply crystallised. May and her colleagues cannot accept that Britain is about to fail, because they have forced themselves to privilege faith over evidence. The prime minister retains all the delusions of a year ago, but none of the power. Her time, and ours, is running out.