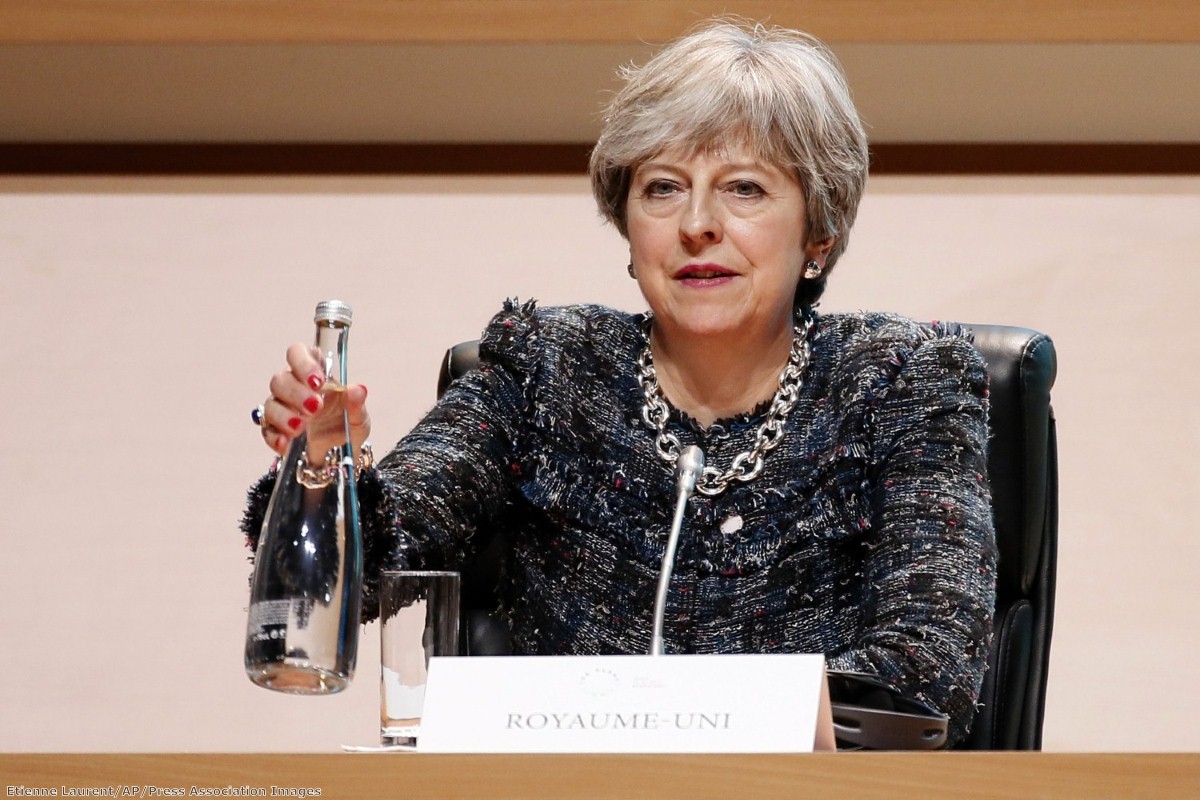 Brexit: A familiar return to chaos and embarrassment for May

Theresa May has over the last 18 months demonstrated that she enjoys a good farce. But last Friday she appeared to have abandoned some of the slapstick in favour of the national interest when she signed up to a joint report in Brussels which finally recognised the consequences, and necessity, of retaining an open Irish border. That was never going to keep us entertained for long, so the state-of-the-nation Carry On film was once again broadcasting in time for the Sunday politics shows.

In a week of chaos, David Davis and Michael Gove have fallen over themselves to assail our credibility and infuriate our partners, May has continued to speak indecipherable nonsense about future negotiations, and the government has desperately tried, and failed, to stop parliamentarians taking back control of the Brexit process. May could have been returning to Brussels today with a semblance of strength, seriousness and purpose. Instead she begins the European Council summit in a wearily familiar state of disarray.

The rot had already set in by the time the prime minister arrived in the Commons on Monday afternoon. The UK-EU phase one agreement had only been alive for three days but had already been traduced, misrepresented and dismissed by various Cabinet ministers. Gove had suggested that we could in the future diverge on regulation, in direct contradiction of the agreement’s terms; while Davis told Andrew Marr that the deal was not ‘enforceable’, and that without a deal, we wouldn’t pay our financial commitments either. Government officials helpfully provided additional petrol for the wintry fireplaces by apparently telling Gove and Boris Johnson that the deal was ‘meaningless’.

All of this has gone down as expected with the Irish government and senior figures in Brussels, who pointed out that they would hold us to the deal. The alternative is no deal at all. May had some explaining to do. Given that clarity, insight and plain speaking have generally not been identified as her key strengths, it was perhaps no surprise she did her best not to meet low expectations.

Over the course of 100 minutes, the prime minister tried hard not to say anything of substance.  Difficult questions were mostly ignored or kicked into the long grass now known as ‘phase two of the negotiations’. She trotted out the usual idiocies, such as “leaving the EU means leaving the single market and customs union” (it actually just means leaving the EU), and added some new stock phrases as well – in particular “nothing is agreed until everything is agreed”. The EU uses this phrase to remind the UK that it will not be able to duck vital commitments in order to get a final deal. Now it seems May is deploying it to titillate hard Brexiteers with the notion we may abandon Friday’s compromises for the serenity of the cliff-edge after all. Astonishingly, at one point she repeated, unprompted, the old suicidal mantra that “no deal is better than a bad deal”.

Her initial statement clung to the wording of the Friday agreement like a tightrope-walker trying to fend off vertigo. There was the ludicrous sub-Orwellian language about an ‘implementation period’, even though we only need it as we will have nothing to implement, and then the desperate ‘nothing-has-changed’ protest that she has remained consistent since the Lancaster House speech, even though the government had since changed its stance on every issue from money and negotiation sequencing to the transition and future regulation.

Jeremy Corbyn, to his credit, struck some decent blows in his response, and asked particularly good questions about the precise nature of ‘full regulatory alignment’. Crucially, he further highlighted the government’s idiocy in sticking to the exit date of 29 March 2019 when it was clear “the whole country would rather get the best deal a little bit later if it meant a better deal”. The Article 50 extension cat is now fully out of the Labour bag – as it needs to be.

May’s response was absurd. She mocked the Labour party’s numerous stances on Brexit, as though it was preferable to deliver an initial pledge to jump out of the window than change one’s mind and gradually retreat from the ledge. Insanely, she declared that it was impossible to change the exit date as “that was what the British people voted for” – as though the electorate had, first, opted for a specific date on the ballot paper, and second, insisted upon that date, even if it guaranteed them misery.

Hilariously, May levelled accusations at Corbyn that a psychologist could only have deemed projection. His Brexit, apparently, would mean “following EU rules with no say on them” and “no divergence from EU rules in the future”. She apparently had not read the agreement on Friday which effectively subordinated the UK to EU regulations affecting Northern Ireland in perpetuity, without any formal seat at the table in deciding them. Her jibe that Corbyn “would not make a success of Brexit, it would be no Brexit at all” may indeed prove more prescient – and closer to home – than she imagines.

There were commendable interventions from some of the gathered MPs. The reliably excellent Ken Clarke pointed to the extraordinary situation of the government entering into a treaty-like agreement and then immediately questioning  whether it was bound by it. The SNP’s Ian Blackford repeated the Irish deputy prime minister’s statement that the “commitments must be upheld in all circumstances”.

But it was Ed Miliband who addressed the crux of the government’s contradiction: how the regulatory autonomy May was proclaiming could be reconciled with the regulatory alignment demanded by Friday’s agreement. May’s answer seemed not to understand the deal: she declared, once again, that there was a ‘guarantee’ of no border, and then immediately afterwards stated that “in any trade agreement, a decision will be taken as to those rules and regulations on which we wish to operate on the same basis”. Those positions remain as mutually incompatible this week as they were last week. If the agreement demands full alignment on issues pertaining to the all-island economy and Good Friday Agreement, then those decisions have already been taken. Parliament will be unable to determine its own regulations unless it chooses to breach the deal with the EU.

A couple of commendable items emerged from the debate – although really they were the bare minimum. May confirmed, for example, that pensions for UK citizens abroad would continue. But mostly she delivered more of the same magical thinking that had briefly landed to earth on Friday morning and then immediately resumed flight. She reiterated, in particular, that a full trade agreement, rather than a bare outline, could be negotiated by October. In other words, the prime minister still believes the deal her own Brexit Secretary dubbed ‘as complicated as the moon landing’ could be wrapped up in just ten months. She also affirmed that we would sign trade deals and “Northern Ireland will benefit” from them – which might come as news to the officials in Brussels who had just seen her commit Northern Ireland (and the UK) to align with the EU on tariffs. None of this makes us look credible or trustworthy in Brussels.

May confirmed the fear that she would not pay our financial obligations in the event of no-deal – seemingly untroubled that this would almost certainly lead to a case against us at the International Court of Justice, and more importantly shred any reputation for fairness and honest dealing at a time when we most needed international goodwill and investment. After May said that the financial offer depended on a deal being reached, she instantly declared that Britain was a country that honoured its commitments. She was unable to explain how we might honour those commitments if simultaneously threatening not to honour them. She was also unable to confirm that a no-deal scenario would preserve citizens’ rights.

In the meantime, of course, she has to deal with the restlessness both of her EU counterparts and backbenchers. Donald Tusk this week described ‘a furious race against time’ to complete the second phase of negotiations, while the European Parliament, which has to endorse the final deal, specifically condemned David Davis’s dismissive remarks in its latest resolution. Officials are now insisting that the UK translate the joint report into law as soon as possible – in the words of one figure, to ‘make it David Davis-proof’.

This is the moment an opposition teller took his place on the outside of the dispatch box, signalling the government had lost pic.twitter.com/FFJP1SdFir

Which of course brings us to the parliamentary events of yesterday evening. The success of Dominic Grieve’s amendment 7 was a personal triumph, and a welcome victory for parliamentary sovereignty which ruthlessly exposed the Brexiteers’ deceit over ‘taking back control’. Substantively, however, it changes relatively little. MPs can use the ‘meaningful vote’ to reject the final deal, but they cannot force the government to change its approach – which would be a necessary pre-condition for renegotiating terms with the EU. That would leave the options of a cliff-edge or Article 50 revocation, neither of which May would realistically entertain. It would be an epic shambles, while the alternative endorsement of a terrible deal would be an economic catastrophe.

In the short term, the most important effect of Grieve’s amendment was to display the government’s parliamentary weakness and incompetence. The decent result on Friday cannot conceal the government’s hubris or lack of understanding. May does not grasp the concerns in Brussels or on the Tory backbenches; and she either does not know what she signed up to in the joint report, or cannot fathom how to be honest about it. She could have chosen pragmatism in the six days since the agreement, but instead has reverted to authoritarian, cakeist type, with predictable consequences.

The one consolation of Brexit is the knowledge that future historians will find it so puzzling, fascinating and useful. Never before has a world power elected to amputate various limbs in front of its horrified friends, half-heartedly glue some of them back together at those friends’ behest, and re-sever them immediately afterwards. Nor has it reacted with such fury to some of its own parliamentarians offering a couple of bandages. Will the students of Britain’s collapse try to find meaning and strategy in this chaos? Or will they simply watch the events of the last week and conclude our so-called leaders simply had no idea what they were doing or why?