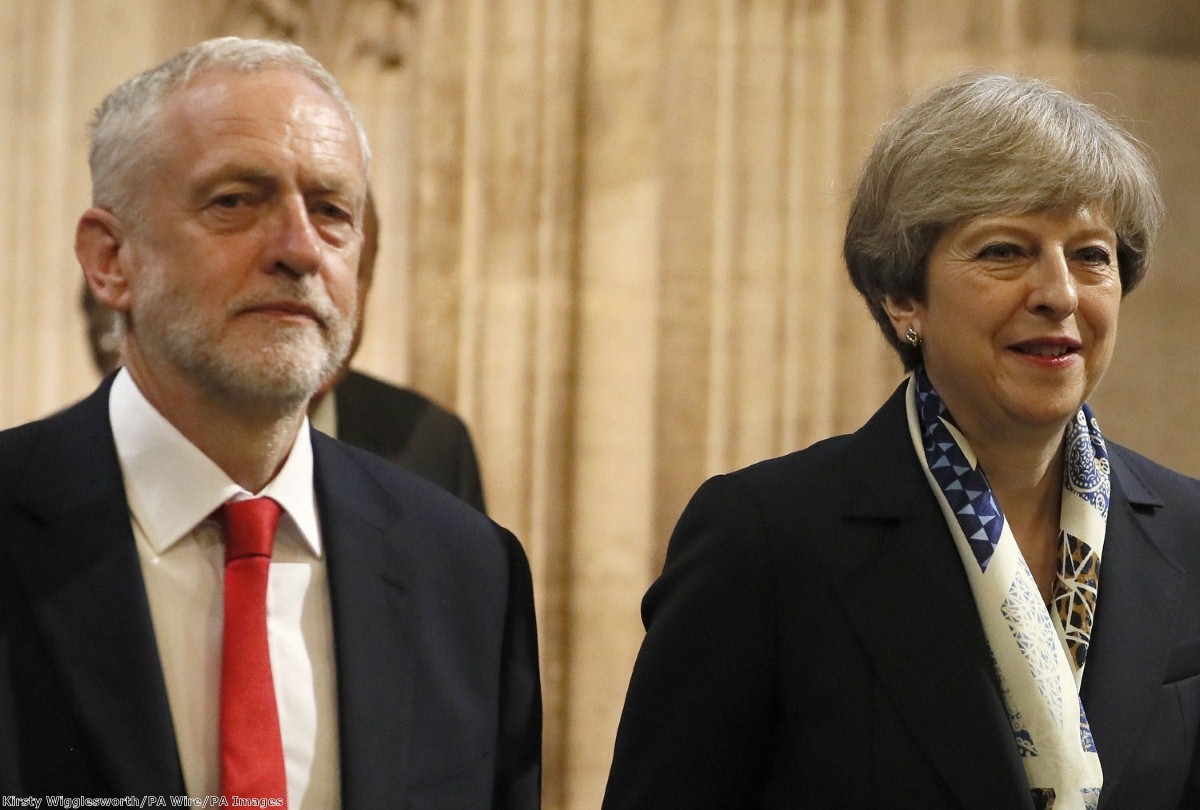 After an election campaign that saw an unusual (but not unprecedented) amount of movement in the polls, things have settled down somewhat. Labour has maintained a narrow lead since the election, averaging 42-45%, with the Conservatives back on 40-41%.

But the current stability feels very much like the eye of the storm. It's difficult to think of another time when there has been such uncertainty in our politics. By the next election the Tories will have a new leader and the Article 50 Brexit negotiating deadline will probably have passed.

But whether we have secured a transition arrangement, extended the negotiating deadline or crashed out of the Union with no new agreement at all, the full consequences of Brexit will barely have begun to take effect.

The identity of the new Tory leader and the twists and turns in the Brexit negotiations will, of course, have enormous impacts on the next election. So in the context of such uncertainty, what can the polls and wider events of today really tell us about the parties' electoral prospects?

There are four signals I'd pay particular attention to.

First, let's remember not to be stupid: it's the economy. The untold story of June's election is that, with growth weak and real incomes falling, no sensible politician would have called it. The Tories seem to have thought that Brexit combined with Corbyn's (at the time) catastrophic personal ratings gave them a holiday from political reality. It turns out there's no such thing.

It's not just that headline economic numbers were poor – voters were really feeling it. On June 9th we went into the field with a poll for the TUC, similar to one we did straight after the 2015 election (and following the EU referendum last year). Whereas in 2015 voters were upbeat about the economy, this year's survey showed they thought it was getting worse, not better, by 54-32%. More importantly, more voters said their own finances were getting worse (46%) than better (35%).

Compare that to the 2015 election, when only 26% thought the economy was in decline and 60% that it was improving, while 39% felt their own finances were worsening and 44% improving.

Looking ahead, uncertainty due to Brexit will continue to be a drag on the economy; if the numbers carry on getting worse, especially real incomes, the Conservatives' prospects at the next election will become even grimmer.

Second is the impact of the Brexit negotiations on the Conservatives. A surprising fact about the election, given the result, is that to some extent Theresa May got what she played for. Voters who rated Brexit and Britain's relationship with the EU as one of the three most important factors in how they voted plumped for the Tories rather than Labour, by 62-22%. May's problem was that not enough of the electorate bought her framing of the election – only 52% rated Brexit a top-three priority. Among the other 48% Labour won 62-24%.

The danger for the Tories is that the negotiations could begin to erode the advantage they enjoy among people who rate Brexit as important. The recent row over American chlorine-washed chicken opened a divide between leading Tory Brexiteers Liam Fox and Michael Gove. There are surely much more serious disputes to come. Between 2015 and 2017 the percentage of voters rating the Conservatives 'competent' dropped from 57% to 49%. It had been one of their key advantages over Labour, but the gap has narrowed. More of the same around Brexit and they will be in real trouble.

The third sign to watch is public services. In our TUC poll, the one issue that more people said was critical to their vote than Brexit was the NHS. Labour's pledge to give it £30bn extra funding over the course of the next parliament was by far its most important – even among its newer, younger supporters. Seven years of cuts have taken their toll on the Tory brand, and Labour's decision to run an explicitly anti-austerity campaign was a good one.

A crucial enabling factor was Theresa May dropping the Cameron-Osborne mantra of a 'long term economic plan'. They had managed to maintain this justification for austerity since before the 2010 election, but May's abandonment of it opened up political space for Labour to promise more spending without sounding fiscally irresponsible. Labour will look to highlight cuts and the damage they've done as often as possible, if they are backed up by big scandals and stories about hospitals and schools failing Britain, the Tories' position will look extremely weak.

The fourth thing to watch out for is Corbyn's performance. To get to its 41% vote share Labour relied heavily on bringing in new voters – nearly one in six Labour voters had not turned out at all in 2015. This group's continued enthusiasm is by no means guaranteed. Labour's new voters are strongly anti-establishment, so besides his enthusiasm and confidence as a campaigner, Corbyn's other great asset was his clear outsider status.

But these voters are also pro-EU: 59% voted Remain, 39% Leave. This means there are two risks inherent in the party’s current divide over Brexit.The first is simply that it puts the leadership at odds with many MPs, party members and voters, the second, more subtle, risk is that the struggles to define and then redefine Labour's Brexit position make Corbyn look more and more like a standard-issue politician. It will be much harder for him to whip new voters into a revolutionary fervour if he appears to be taking positions out of expediency rather than conviction.

The risk here is not so much that these voters switch to another party as that they switch off altogether; watch the numbers for 'certain to vote' among the under-35s for any signs that the Corbyn-as-outsider effect is wearing off.

As ever, a flurry of good or bad headlines still has the capacity to change a party's fortunes. But if three or four of these signals are all pointing the same way, that's a good indication of which way the tide is moving.