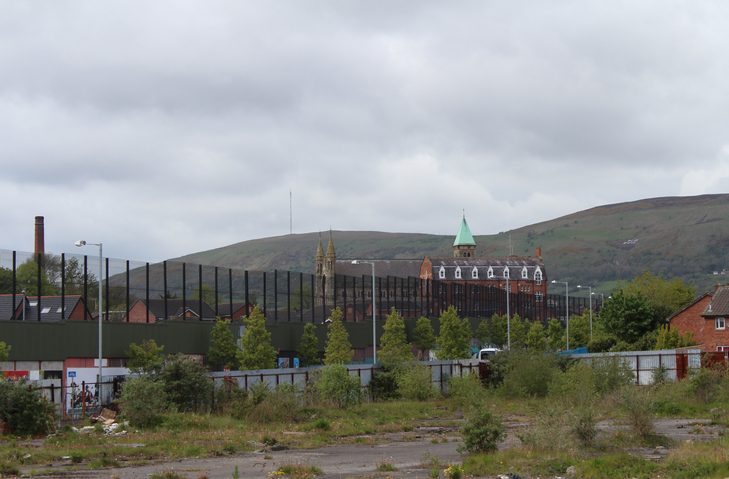 This has therefore been a grim week for both Leavers and Remainers, because they suggest the latter weren’t wrong. The scenes that have played out in the Shankill and Springfield areas of Belfast over the last few days are like a bad dream come to life. They are every warning that was made over the last five years come horribly true.

It began with the decision by public authorities on March 30th not to charge any members of Sinn Fein over a huge funeral which seemed to contradict covid regulations. Rioting has now taken place for seven nights, leading to 55 officers being injured, masked gangs throwing bottles and bricks across ‘peace line’ fortifications, and a torched bus.

The funeral might have sparked it, but it could have been anything. Everyone knows the truth, even if not everyone will admit it: the protocol threw a spanner in the delicate constitutional machinery of Ireland. That then enflamed long-simmering division and a sense of unfairness. If we’re lucky, this will be as bad as it gets – a series of violent skirmishes, mercifully with no-one killed. If we’re unlucky, it is just the start. All it takes is one death – a stray firework or petrol bomb – for things to escalate out of control.

There’s more going on here than Brexit, of course: there’s lack of opportunity, neglect from Westminster, poverty, and the self-interested pot-boiling cynicism of political parties, in particular the DUP. But Brexit was the tinder. It started the fire. And without Brexit we would not be seeing what we are seeing today.

Once the referendum vote was cast, there were only three options. You could keep the border around the UK by staying in the customs union. This was supposedly a betrayal of Brexit. You could put the border between the Republic of Ireland and Northern Ireland. This would inflame Nationalist sentiment. Or you could put it between Britain and Northern Ireland. This would inflame Unionist sentiment. In the end, they picked the final version and we are now seeing the consequences of that.

Remainers highlighting this issue are often told that they need to let the past go. What’s done is done. We need to try and fix the present. That means fixing the problems with the Protocol.

And of course that’s true, in a redundant sort of way. It is done. The hardline Leavers won. But we cannot fix the present if we keep repeating the failures of the past. We have to learn from what we’re getting wrong. That comes down to four repeated failures.

First: Neglect. Northern Ireland has been largely ignored by Boris Johnson’s government when it pursued its Brexit deal. That neglect continues now. British media outlets and newspapers seem barely aware of the violence in Belfast. It’s as if it isn’t happening. Johnson himself has managed one tweet about it. No.10’s big idea to tackle the situation was to send the Northern Ireland secretary, Brandon Lewis, to Northern Ireland – the place where he should have been anyway.

Lewis is a profoundly hapless and inadequate figure. Indeed his very presence is testimony to Downing Street’s indifference. He replaced Julian Smith, an exceedingly good secretary of state who successfully restored power-sharing after three years and was admired across the political and national divide. Why? Because he had the temerity to tell the Northern Ireland affairs select committee that no-deal Brexit was “a very, very bad idea”. Loyal inadequacy was prized above independent-minded competence.

Second: Lies. Johnson never had an honest conversation about the fact that he was going to place a border between Britain and Northern Ireland. He couldn’t, because he had been so clear beforehand that this would be an unforgivable thing for a British prime minister to do. “I want to make it absolutely clear, that under no circumstances, whatever happens, will I allow the EU or anyone else to create any kind of division down the Irish Sea,” he said. He told Northern Irish business people that they could put customs declaration in the bin.

But of course that was all false. The border did exist. It does now. Customs declarations cannot go in the bin. He negotiated this without securing any consent from the people it would affect, he lied about it, he pretended it did not exist, and now it is real. This loses him any opportunity to address the people of Northern Ireland. But it also removes the basic elements of trust upon which a fragile political consensus operates. It means that when political leaders speak, no-one believes them. It means that there is no faith or confidence in the political system.

Third: Breaking the law. Once the protocol was agreed, the British government openly proclaimed that it would break international law and contravene what it had itself signed. It did this first of all with clauses 44, 45 and 47 of the UK internal market bill, then decided against it, and then threatened to do it once again when it announced it would unilaterally extend Brexit grace periods. “This is the second time,” Maroš Šefčovič, vice-president of the European Commission said, “that the UK government is set to breach international law.”

If the government loudly proclaims that it plans to break international law, why should the communities they govern come to different conclusions? It authorises a kind of instinctive take-what-you-want, do-what-you-like behaviour, a sense that the normal rules don’t apply.

Fourth: Tribalism. This has been the chief narrative of the entire endeavour. It was the starting assumption and the end result of the Brexit period. Us versus them. The UK versus the EU. Leavers versus Remainers. They made politics a war based on division and triumph instead of a discussion based on consensus and compromise. So now it is hardly surprising that this sentiment pumps through the circulatory system of places where tribal division is the starting assumption of politics. It degrades that which was healthy and worsens that which was not.

What’s done is done. The Brexiters won and we must now deal with the consequences. There’s no point responding to these events by endlessly replaying the circumstances which are responsible for them. But we cannot move forward unless we stop making these same mistakes.

The protocol must be grappled with urgently. This will involve compromise from the EU as well as the UK. It will have to bend in a way it finds unnatural. But UK ministers will have to compromise too.

They must stop neglecting Northern Ireland. They must dedicate proper resources and attention to it. If they cannot do this on the basis of their own political responsibility, they should do it for the self-interested reason that it is the key to having a successful relationship with the US president.

They must stop lying. Without accuracy and honesty there can be no solutions because there is no agreement on what the objective reality of the situation is. They must stop threatening to break the law. And they must stop engaging in tribalism. They have to return to a moderate, universalist approach to governance that does not function by encouraging division, finger-pointing and suspicion.

This requires a degree of responsibility, judiciousness and fairness which Johnson, Lewis and David Frost have shown little sign of. And we should not kid ourselves, even then, of the chances of success. Teenagers are not rioting because of the minutiae of agricultural imports.They are rioting because principles and questions of identity have been broken, letting loose a heightened sense of emotion to build off existing neglect and lack of opportunity.

But given where we are, this is all we have – this is the best chance we have. We must pray they have the ability to learn from their mistakes, despite all the evidence. Because if they don’t, things could become very grave indeed.