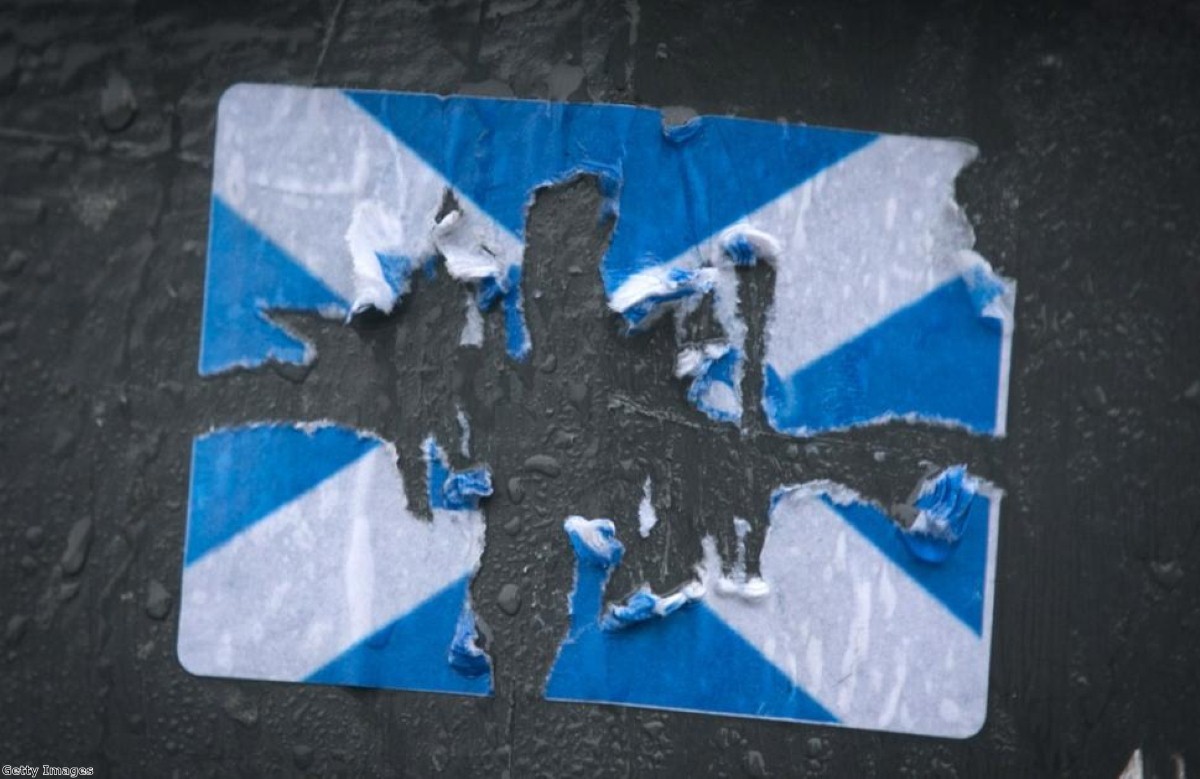 A secretive group is beginning campaigning in Scotland this week with a simple mission: stopping the SNP by encouraging tactical voting.

Scotland's Big Voice aims to persuade people they need to vote for a party other than the one they support in seats where doing so could blunt the nationalist threat.

The group has around 2,000 supporters on Facebook and says it is planning to begin door-knocking in seats where it thinks tactical voting could make a difference.

"If enough No voters and even those Yes voters who disagree with the SNP's politics can come together in May, then we can severely limit the SNP at Westminster," a spokesperson said.

Scotland's Big Voice is not alone. Today the Telegraph comes out in support of tactical voting in Scotland, arguing: "To avert a crisis that will once again threaten the Union, a new and bold approach is needed to stop Mr Salmond in his tracks."

The potentially overwhelming prospects of the nationalists seizing the majority of seats north of the border are underlined by today's ICM/Guardian poll, which puts the nationalists on 43% to Labour's 27%.

That explains yesterday's hubristic comments from Alex Salmond in declaring he will be able to force Labour to commit to spending that will benefit Scotland in the party's first Budget as a minority government.

Westminster's preoccupation with who forms the next government isn't distracting the unionists behind Scotland's Big Voice, who are more mindful of the 45% of Scottish voters who backed independence last September.

So they've produced a 'wheel' showing who they think can stop the SNP in Scotland's seats.

The wheel isn't perfect, but if it stops the SNP gaining a seat by 1 vote, it's worked. Get behind the wheel. #SNPout

Labour are the default option but the wheel's focus is on the Lib Dem and Tory alternatives. Unionist voting would undoubtedly help the Conservatives – the party only has one MP in Scotland right now, but this would put them in line for double figures. Perhaps this is why the Telegraph is so keen on the idea.

Tactical voting is a deeply problematic concept, though – it perverts the fundamental principle that people should cast their vote for the political party they support.

The temptation to do so is likely to be higher in this election than in any before it. Polling out today by YouGov for the Times' Red Box found 61% would go ahead and vote for their preferred party anyway.

But 20% indicated they would be prepared to vote for the party most likely to stop the Tories or Labour from winning.

And in Scotland, which has a greater tradition of tactical voting, the likelihood is that proportion will be much higher – especially if groups like Scotland's Big Voice have an impact.

Hi Scotland. Just a little reminder that #GE2015 is a stealth #IndyRef. We should think about tactical voting. http://t.co/ePHERo5veG

The group go to unusual lengths to preserve their anonymity. Contacted on Twitter, they initially told Politics.co.uk they were reluctant to give out contact details at all. Their reticence was interesting in itself, and makes sense: of course they'd want to keep their identities quiet if they're members of different political parties.

"Yes, it does help," came back the reply. "A nice side benefit is that it really irritates the Nationalists, not knowing who is behind SBV."

These formalities behind us, an email interview followed over recent days. Here's my questions and their answers.

We are a mix of people from across Scotland from all backgrounds.

How many members of the group are there?

Are any of you members of political parties?

Yes. A number of us are members of political parties.

Are any of you elected representatives of political parties?

Are any of you Labour party members?

Yes of course, but we have around the same number of Conservative members, along with some Liberal Democrat and Ukip members. All willing to vote tactically.

What motivated the group to form? What is its goal?

We formed soon after the independence referendum from several other Facebook groups coming together. We realised that to stop the SNP requesting another referendum and breaking up the UK we would have to limit their impact through tactical voting. Initially it was only for the Scottish general election, but we soon realised that they were a threat in the general election also, so our aims changed to target both elections.

In how many seats do you think tactical voting could make a decisive difference?

Obviously we hope all of them, but we are realistic. Some seats are too close to call. We are hoping our tactical voting wheel will be effective in the vast majority of seats. This would make a massive dent in the SNP's hopes.

Do you think parties like Labour should openly endorse tactical voting?

We'd love it if they could, but we appreciate that they can't. There are obviously some seats that Labour do not have a chance [of winning], so it would be nice if they could encourage their members to vote tactically in those areas, but that's what we are here for.

Do you support electoral reform?

Where will the door-knocking and leafleting take place? Which towns across Scotland were you thinking of targeting?

Currently we are only on social media, but we begin our door-knocking and leafleting campaign next week [this answer was written on Friday March 20th] and will be hitting several towns across Scotland in the run up to the election.

You mentioned the group formed as a result of several Facebook groups coming together. What groups were they?

We were formed from several small Facebook groups that no longer exist. Some of our members were apart of Better Together. We are all just regular people, with regular jobs and regular families and friends, a real grassroots campaign.

It looks like tactical voting isn't going to make a decisive difference in large parts of Scotland because the SNP's support is so strong.

Tactical voting can and will make a difference in many seats. In areas where there was a Yes vote tactical voting is unlikely to work but we still encourage it. Luckily there were not many Yes voting areas.

If enough No voters and even those yes voters who disagree with the SNP's politics can come together in May, then we can severely limit the SNP at Westminster.

We are encouraging our members to leaflet their local area if we do not have a targeted event there. We've already had a number of people requesting leaflets from the Borders to the Highlands, so hopefully we will be getting the message out successfully over the coming weeks.

Here's what Pete Wishart, the SNP MP for Perth and North Perthshire, has to say about the Scotland's Big Voice campaign:

“It is disastrous for Labour in Scotland for people to hear about these plans to work with the Tories in the election, and even talk of a 'grand coalition' between their party and the Tories after May 7th.

“The latest polls are welcome indications of the strong backing for the SNP we are seeing in communities across Scotland – while Labour are continuing to pay the price for working hand in glove with the Tories during the referendum, and lining up with them at Westminster to vote for more cuts.

“We take nothing for granted, and will work extremely hard to win people's trust on May 7th, so that we can deliver jobs and growth in place of Westminster cuts. More anti-Tory MPs than Tory MPs at the election means that we can lock David Cameron out of Downing Street. And electing a strong team of SNP MPs will also ensure that Scotland has real power at Westminster to ensure that Scottish interests are served – and progressive politics delivered across the UK.”