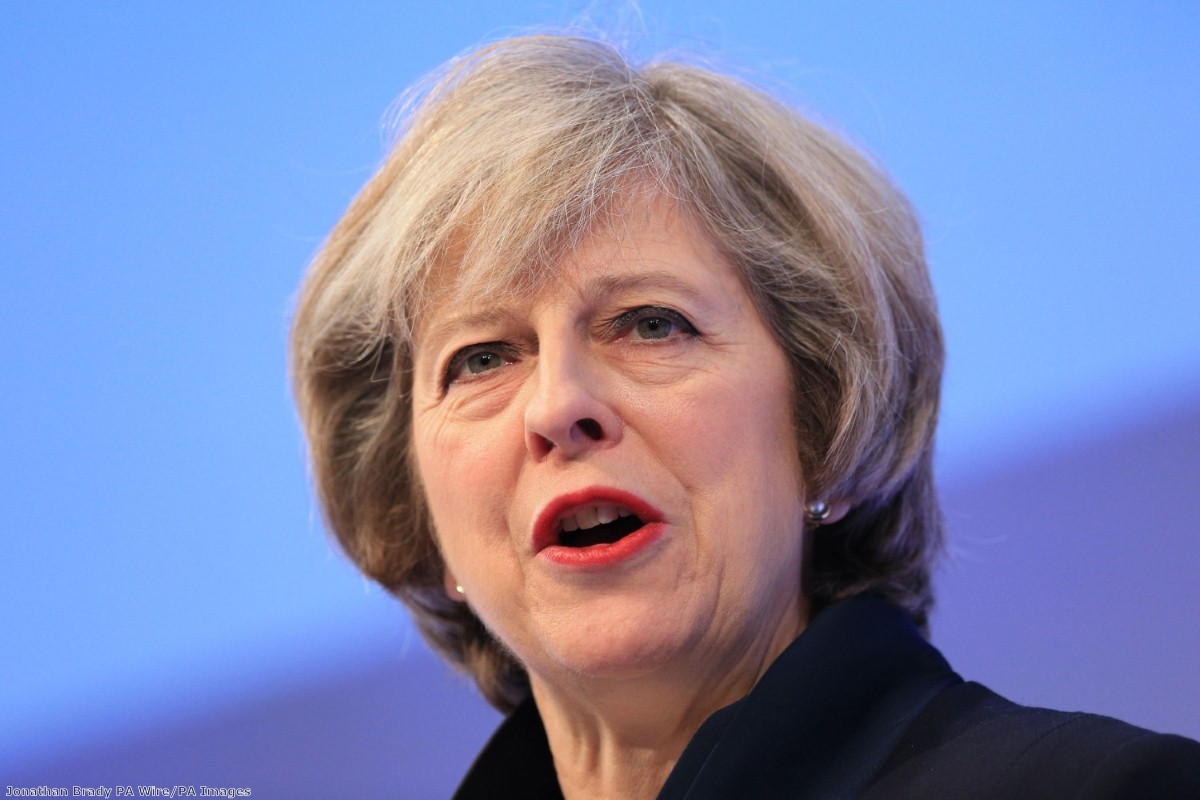 The truth about May’s £20m fund for women’s refuges

As MPs head to parliament to debate the future of funding for women's refuges, an investigation by The Bureau of Investigative Journalism reveals huge delays in promised funds and takes a closer look at the current crisis.

She is the head of a women's rights charity and has been waiting nine months for promised government funding for a new domestic violence refuge. Since being told in February she had successfully won the funds, she has not seen a penny. She has now found out she never will.

Despite the council receiving the funds from central government, as confirmed by the Bureau, Diana said the council has now told her "the money is not coming".

For Diana, this means she cannot open the refuge as planned and must now find somewhere to shelter the vulnerable women the refuge was meant to house.

Diana is not alone. For many, the two year £20 million pot of money from the Department for Communities and Local Government (DCLG), which Theresa May said had the potential "to completely transform the way we think about and tackle domestic violence and abuse", has failed to materialise.

Some councils cited bureaucratic delays, some said they were re-tendering for contracts and others said transfers were yet to happen. In some cases, like Diana’s, councils had not passed on any funds and now say they may not need to.

These findings come from Freedom of Information responses received by the Bureau in early November.

In some cases, that left refuge managers unable to open shelters, in others, refuge staff have been put on notice or managers have been forced to dig into their reserves to keep the doors open.

"It's so troubling," says Diana. "These women, who are so vulnerable, are suffering as a result of the council's messy bureaucracy, that is one of the things that breaks my heart the most."

The findings come as proposed changes to welfare payments suggest refuge funding could end up almost solely in the hands of councils, rather than the current model which sees refuges getting 24% of their funds through the women's housing benefit, according to a survey of refuges by charity Women's Aid.

The event comes after a series of revelations, including the Bureau's own work, which have laid bare a funding system in crisis.

Labour MP and chair of the All Party Parliamentary Group on Domestic Violence, Jess Phillips, said the Bureau's findings and the move to change refuge support was "very, very concerning."

"Just giving a pot of money to cash strapped councils with no oversight is completely naive, and comes from people who have no understanding of how the system works," said Phillips.

"I know councils are in a terrible situation financially. Some prioritise domestic violence and some don't. Some could just use the funds to backfill their budgets," she warned. "The government says this DCLG money will go to fund bed spaces but where are they? It simply is not true, and it certainly shouldn't be trumpeted as some sort of solution."

Concerns about safe shelter spaces come as figures from the Femicide Census released this week show that of the 113 women killed by men in England, Wales and Northern Ireland last year, 85 died in their homes. Seventy-eight of the murdered women were killed by their current or former partner.

Earlier this year, the Bureau revealed local authorities across England have cut their spending on domestic violence refuges by nearly a quarter (24%) since 2010, with some slicing funds by more than a half in that time.

We found that sweeping cuts from councils had left many refuges running a bare-bones service. Refuges were cutting down on staff numbers and having to turn women with complex needs away because they just did not have the resources to support them.

A snapshot survey of 40 refuge managers across England revealed they had turned away more than a thousand women in six months alone. Managers told us of a system at breaking point, "women and children are going to die as a result," one insider told us.

The Royal Borough of Windsor and Maidenhead, one of Theresa May's local councils, told the Bureau, through FOI, that they do not fund any local refuges at all, leaving local providers to looks for funds elsewhere. Last year, the council was consulted on 127 high risk domestic violence cases.

In Kensington and Chelsea, where the council's spend on domestic violence has dropped by 45% since 2010, one of the main refuge providers has reduced its budget.

In late July, after weeks of complaints from residents about leaks and pest infestations, the ceiling of the refuge fell in, forcing seven women and their children to move out. We followed their stories for the next three months as they were moved from Travelodges, to B&Bs, to inappropriate council flats.

But fears for the safety and security of vulnerable women fleeing abuse were compounded further when, in late October, the government put out a consultation report on supported housing which suggested that women would no longer be able to pay for refuge accommodation through their housing support benefits.

Housing support generally pays for around 24% of refuge costs.

A survey by Women's Aid found that 39% of refuges asked said they would have to shut down if they could no longer rely on housing benefit income. That would impact more than 4,000 women and children currently using those services.

The government's proposed solution is a "ring-fenced" grant to councils, funds which would be earmarked for supported and emergency housing. But the proposed changes do not specify that funds must go to refuges. Experts warn that councils could choose to spend this on other forms of emergency accommodation, including housing for older people and homeless people. The fear is that, by leaving payments to councils’ discretion, refuges could be sidelined completely.

Gaps in the funding

Whenever the government is pushed on its response to these local council cuts and proposed changes to housing benefit, it is quick to cite the new funding assistance it has made available.

Last year plans were announced for a £20m pot of refuge-specific funding which was overseen by the Department for Communities and Local Government. In February, 76 projects were announced with much fanfare. The government said the funds would help over 19,000 victims of domestic violence and provide 2,200 bed spaces – like the one promised to Diana.

While the funds were welcomed by support workers, it tends to cover new projects rather than gaps in existing support.

The Bureau previously revealed that the £20m pot had also created a postcode lottery for this extra funding.

Our analysis shows that 50 local authorities, where 15% of the adult female population live, received nothing.

Even in areas that were funded, the amount per head of population varies wildly, from the equivalent of £3.52 per adult woman in Cumbria to just 11p in Kent.

Fear of speaking out

New analysis by the Bureau can now reveal that for those lucky enough to win some of this funding, those promises have gone undelivered, including Diana’s refuge.

But with refuge funding so scarce and relationships with councils so fragile, most refuge managers were too afraid to go on the record and risk losing precious future funding.

One refuge manager explained how she had been pressured by the council to sign backdated contracts to make it seem like the money had been received earlier, even though the funds had not arrived months after they had been expected.

In another case, a women's rights organisation manager said her organisation had been dropped from the project after the bid was successful.

In some cases, refuges which had been part of the original bid process later were told that they would have to re-tender for the funds again, even though their details had been used in the successful applications.

In other cases, NGOs found their names on successful application bids despite having absolutely no knowledge of the bid at all.

Funding to Leicestershire County Council was delayed because the DCLG accidently sent it to Leicester city instead, and had to claw it back.

Lancashire County Council told us funds intended to pay for refuge support for BME women and those with complex needs, had "not currently been passed to the bid partners as it is in the process of being transferred." The project was intended to provide 53 extra bed spaces.

Ashford council had been granted £100,000 to provide 12 more bed spaces, with a focus on elderly disabled and traveller women. The council told the Bureau: "No funds have been passed on to partners to date and may not need to be."

A council spokesperson explained that since putting in the bid they had reworked how they plan to fund the refuge at a "significantly reduced rate." "While it is frustrating that this is taking much longer than expected," the spokesperson said, "we believe that if we get this right it will result in facilities that will be sustainable for years to come." The facilities will not be useable until April 2018.

In Hackney, where £100,000 was due to fund a specialist seven-bed refuge for Turkish and Kurdish women, the council had not yet finalised the contract when asked in mid-November. The council told the Bureau they will be in a better position to provide information about the funds in the New Year.

We also heard about another refuge in London which was expecting to receive funds in February but did not receive the money until October. "They were living on reserves, it was really touch or go with the delays whether they would survive," an insider told us.

The DCLG said the department was looking to audit local authorities' commissioning of domestic abuse services, "which will give us a robust picture of provision for all victims across England, enable us to assess the impact of our work and identify any gaps in provision."

A DCLG spokesman said: "Domestic abuse is a devastating crime and we're committed to ensuring that no victim is turned away from the support they need.

“We made £20 million available from our dedicated funding for domestic abuse services, of which all local authorities in England were able to bid for a share. In February this year we announced funding to 76 projects and they were given the money by May. Councils are responsible for using the funds to pay for projects as set out in their bids, and we expect them to roll out this support as soon as practically possible."

Jess Phillips, who called for today's parliamentary debate, told the Bureau that instead of piecemeal funding there needed to be nationally overseen funds. "There needs to be national oversight over it, over what they are delivering so that the service level standardised," she said. "And there has to be flex in the system so funding is based on needs, to ensure it creates a genuine system of national refuges," she added.

Maeve McClenaghan is a journalist for The Bureau of Investigative Journalism.

If you need to talk to someone about domestic violence contact Women's Aid/Refuge free helpline on 0808 2000 247. If you are in immediate danger, call 999.