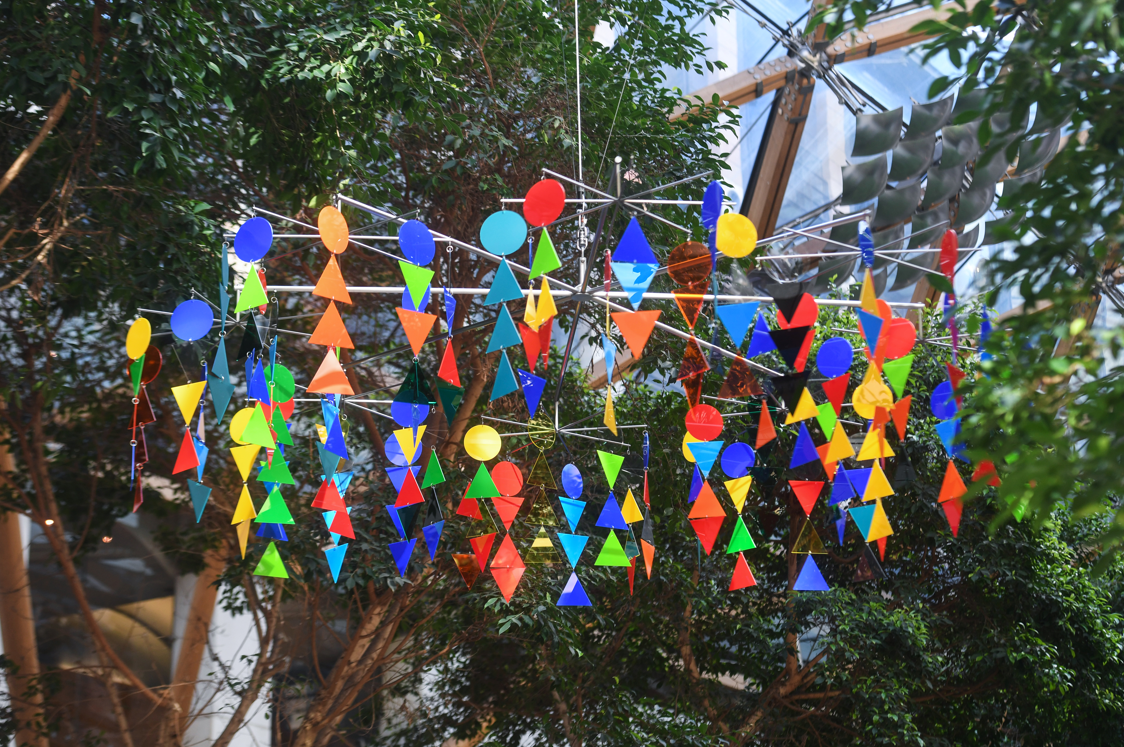 Nicky Hirst, the Official Election Artist of the 2019 General Election, has today unveiled her final piece, which will now hang in the atrium of Portcullis House on the Parliamentary Estate.

Entitled “There Was A Time 2019-20″, Nicky’s contribution is a brightly coloured, carousel-like suspended sculpture. The first mobile to enter the Parliamentary Art Collection, it acts as a dazzling, eye-catching and thought-provoking addition to the space it inhabits.

During the election campaign of 2019, Nicky Hirst followed the campaign trail, observing a wide range of events across the United Kingdom including hustings, manifesto launches, protests and marches. She met with voters and candidates across the country and documented the source-gathering process during the election and beyond. The piece is Nicky Hirst’s personal response to the campaign, and reflects her findings.

Nicky Hirst said: “The General Election campaign of 2019 unusually took place in the cold and wet months of November and December. As I travelled around the country, almost every town and city I visited had its own Christmas Market, with a Ferris Wheel or carousel. These rides, combined with huge station and town hall clocks, focused the mind on concepts around time and movement – specifically the cycle of the electoral campaigns I was following.

“Every member of the public I spoke with during the campaign had different information and another story to tell. Needless to say, ordinary people are extraordinary. I wanted the commission to not only reflect our democratic process but also the diversity and myriad of opinion I saw and heard within the electorate.”

The mobile’s moving form represents the “carousel” of stories and individuals present in the election – echoing the fairground carousels present across the country. The abstracted shapes signify political characters from all the relevant parties as well as members of the electorate. With 64 figures in total, all the shapes are different – transparent, opaque and reflective – with a colour palette that references the branding of the political parties. The MPs elected at the 2019 election have been labelled the “most diverse so far” and the work celebrates this by using shape, movement and colour, with each figure constructed either in one solid colour or from a mixture of colours that will subtly shift, drift, spin, disappear and re-emerge.

After progress on the commission was temporarily paused due to the COVID-19 pandemic – where access to Parliament was strictly limited – the artwork was approved for entry into the Collection by the Speaker’s Advisory Committee on Works of Art earlier this year.

Dean Russell MP, Chair of the Speaker’s Advisory Committee on Works of Art said: “There Was A Time 2019-20 continues the Committee’s tradition of commissioning works of art which record each UK General Election, for future generations to be informed and inspired by.

“The first December election in nearly 100 years, the 2019 election also produced the most diverse return of MPs in history. Nicky’s work reflects on this, using movement and colour to represent the diversity of voices and cyclical nature of the election process. As the first mobile sculpture in the Parliamentary Art Collection, it is a thought-provoking and unique addition that also symbolises the individual experiences we all go through – as voters, as candidates and as observers. The Committee and I are delighted to accept it into the Collection.”

Elections have been the subject of paintings and engravings since the 18th century and many examples of these have been acquired for the Parliamentary Art Collection in the past. They illustrate not only political history but also social history and the extension of the franchise.

Since 2001 the Speaker’s Advisory Committee on Works of Art has commissioned artists to create unique works of art which record each UK General Election, for future generations to be informed and inspired by. It is a requirement that each artwork should provide a balanced view of the election, both in terms of political and geographical spread around the UK.

The Parliamentary Art Collection is a unique collection which documents and illustrates the history of Parliament over the centuries and explores the function and activities of Parliament today. The Speaker’s Advisory Committee on Works of Art is committed to developing the collection by acquiring works in different media that depict issues and individuals of particular significance to Parliament.

Nicky Hirst’s sculpture will be available to view from the publicly accessible areas on the first floor of Portcullis House, hanging in the main atrium of the building from 11th April 2022.

As both a key addition to the contemporary holdings of the Collection and an important record of the 2019 Election, the Speaker’s Advisory Committee on Works of Art intends for the artwork to be loaned to galleries and institutions across the United Kingdom after its inaugural unveiling, ensuring that as many people as possible can engage directly with the piece itself. Further updates will be provided by the Committee in due course.