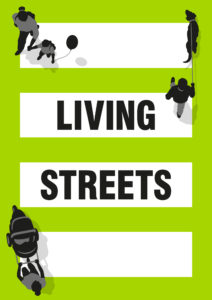 Living Streets has urged the Government to issue its response to the Pavement Parking consultation, which closed over a year ago.

In a letter to Grant Shapps MP, the charity says the government ‘has an opportunity now to achieve progress on this longstanding problem – doing nothing is not an option’.

Living Streets, the UK charity for everyday walking has urged the Government to issue its response to the Pavement Parking in England consultation, which closed over a year ago.

In a letter to the Transport Secretary, Grant Shapps MP, the charity which campaigns for better streets for pedestrians, says the government ‘has an opportunity now to achieve progress on this longstanding problem — doing nothing is not an option’.

The letter is supported by the Walking and Cycling Alliance (WACA) comprising Bicycle Association, British Cycling, Cycling UK, Ramblers and Sustrans. Other signatories include Dame Sarah Storey, Guide Dogs and Transport for All.

New research by YouGov, commissioned by Living Streets, found that 87 per cent of parents with children aged 4 to 11 have had to step into the road because of vehicles parked on the pavement. The survey also revealed that 80 per cent of parents surveyed agreed they would feel safer to let their child walk to school if vehicles weren’t parked on the pavement[1]. The latest National Travel Survey data shows that just 47 per cent of children in England currently walk to school.

“Vehicles parked on the pavement are forcing a huge majority of people into the road, leaving them in the path of oncoming traffic and in danger. Action is long overdue.

“As well as causing an obstruction for disabled people, families with young children and those with visual or mobility impairments, our research shows that pavement parking is also preventing people from making healthier and cleaner travel choices. If we can tackle pavement parking, more families will be able to enjoy the health and social benefits of walking to school.”

“Although most people who park on footways or cycle tracks think that it will do little harm, it places everyone not using another vehicle in danger and disproportionately affects those who use a mobility aid or have a visual impairment. Some disabled and older people are now unable to go out for exercise as it is so difficult to navigate blocked footways & more children are driven to school and activities by parents who feel unable to take them safely on foot. The average person has their car parked for over 90% of the time, and in some local neighbourhoods parking disrupts emergency access and prevents walking or cycling.”