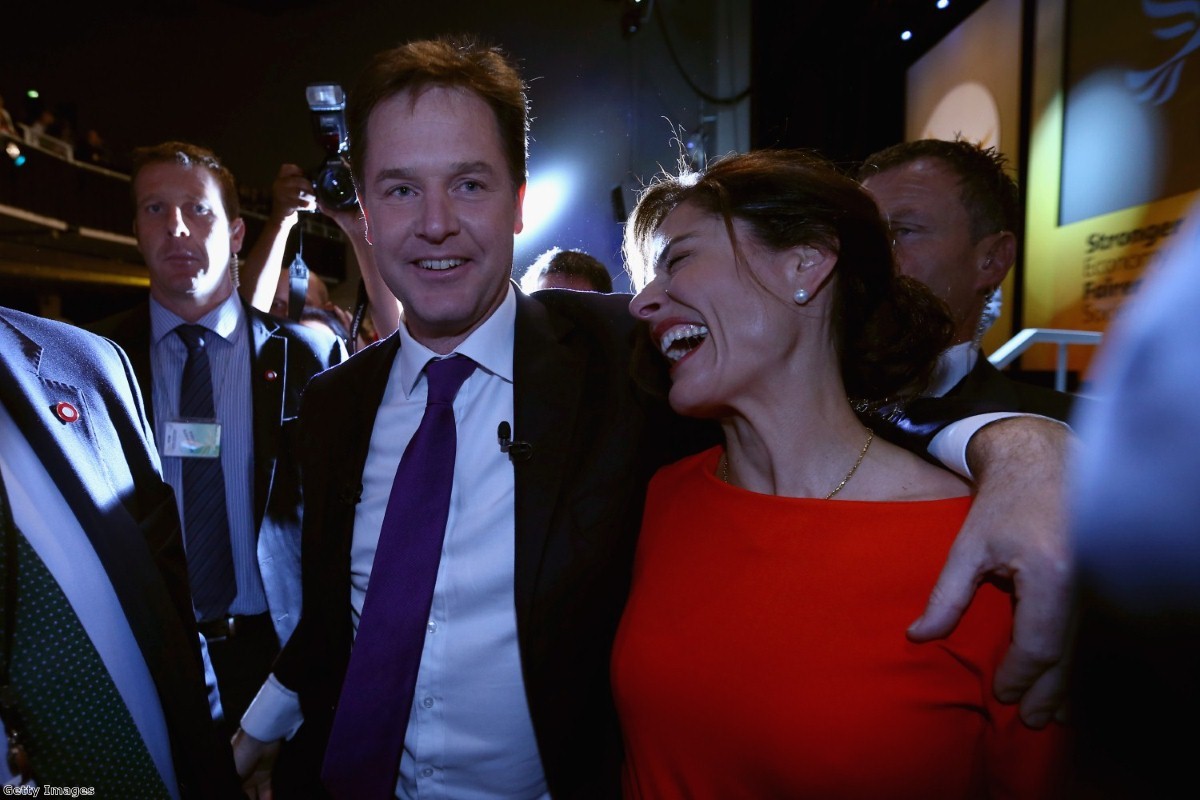 Putting brakes on Tories is an ‘endless battle’ says Clegg

The Liberal Democrats have stopped the country swinging "back to the right" Nick Clegg said today as he set out a list of policies he has personally blocked.

In a speech touted as his attempt to show 'how the sausages are made', Clegg told the Liberal Democrat conference in Glasgow that it had been a constant fight to prevent the Conservatives from imposing right wing policies on the country.

"It’s an endless battle. We've had to fight tooth and nail," he said, adding: "Sometimes compromise and agreement isn't possible and you just have to say 'no'."

"Inheritance tax cuts for millionaires – no. Bringing back O levels and a two-tier education system – no. Profit-making in schools – no. New childcare ratios – no. Firing workers at will, without any reasons given – no, absolutely not."

He claimed that his party had anchored the coalition government in the centre ground of British politics.

"Our place in this government has prevented the pendulum swinging back from left to right. We are now where we always should have been: in power; in the liberal centre; in tune with the British people."

In a moment which revealed some of the harm done to his family life following years of intensely critical coverage in the media, the Liberal Democrat leader said: "I know how hard it has been getting here facing down all the vitriol from our opponents.

"Trust me, there were days I thanked my lucky stars that my children were too young to understand some of the things that were written and said."

He added: "But every insult we have had to endure since we entered government, every snipe, every bad headline, every blow to our support: That was all worth it – because we are turning Britain around."

He warned that all of pain and hard work would be wasted if the Liberal Democrats do not stay in government after the next election.

"The absolute worst thing to do would be to give the keys to Number 10 to a single party government – Labour or the Conservatives," he said.

"All of the sacrifices made by the British people – the pay freezes, the spending cuts, the lost jobs, the daily grind of austerity – all of that would be for nothing."

He claimed that both Labour and the Conservatives would "threaten everything we have achieved" in government, if allowed to govern alone.

"Imagine the next round of leaders’ debates – everyone watching to see who agrees with whom this time."

"For once, I’ll agree with them both. Because they’re both right: left to their own devices, they’ll both get it wrong."

Clegg ruled out ever forming a permanent coalition with another party however, insisting that "we're not here to prop up the two party system: we’re here to bring it down".

In a highly personal speech, Clegg said his own privileged background at a top private school and Cambridge university had made him who he is.

But he said his mother's time in a prisoner of war camp and his family's turbulent history had taught him that "good fortune should never be assumed and misfortune can occur suddenly without warning".

He claimed these experiences as the inspiration behind his policies on shared parental leave, the pupil premium and free school meals for infants.

"These are the measures I’ve spent more time on than anything else in this coalition," he said. "If you want to know what I really believe in you will find it in these policies."

Clegg insisted that yesterday's announcement was just a "first step" towards free meals for all children.

"For the Liberal Democrats, this is a first step: my ambition is to provide free school meals for all primary school children. Another reason we want to get into government again next time round."

He compared this policy to Conservative plans to give a tax break to married couples.

"The Conservatives, on the other hand, have made it clear that their priority is to help some families over others, with a tax break for married couples. A tax break for some, funded through the taxes of others. That tells you everything you need to know about their values."

Clegg's speech completes a conference in which he has won a series of difficult votes on his party's economic and defence policies.

He has been subject to surprisingly little open dissent from party members, despite suffering one high profile call for his resignation on the eve of the conference.