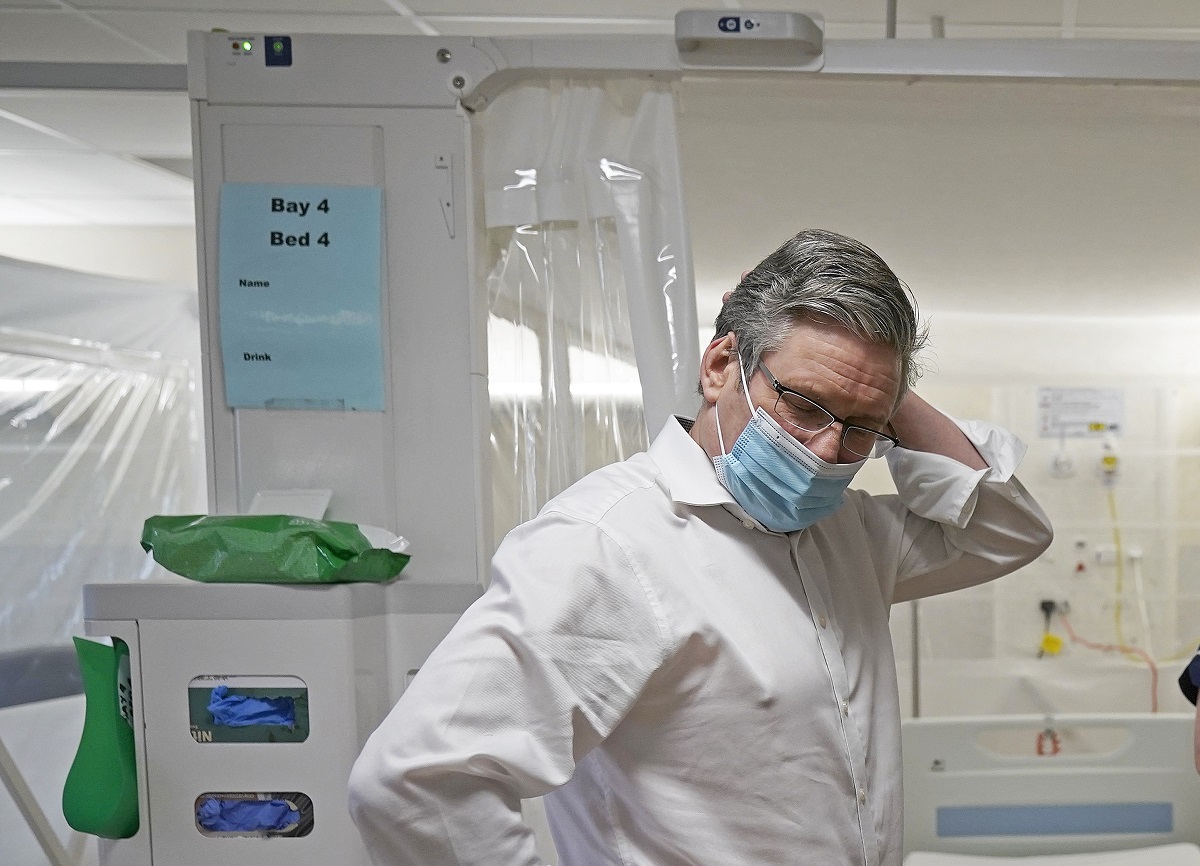 It’s like waves eroding the base of a cliff. Labour had established a solid, principled, literate position on economic policy which had the potential to pay a long-term political dividend. But the waves keep coming – opinion polls, left-wing criticism, a bit of sneaky meddling by Rishi Sunak – and now each one rolling in does more damage.

Labour started with a good position. In January, shadow chancellor Anneliese Dodds gave a speech outlining Labour’s position on tax and spend. It was smart stuff, which opened up a space for public spending while maintaining an overall framework to ensure fiscal responsibility and attract business support. The speech was technical, long and thoughtful. It wasn’t really directed at the public, but instead at those paying attention to the thinking behind the party’s economic direction. And yet it offered the tantalising possibility of the party opposing austerity while forming an alliance with business. All it needed was some decent easily-summarisable messaging to press it home.

Last month, Keir Starmer made his own speech  planting himself firmly against austerity. Again, this was the right call. This is not the time to be raising taxes or tightening belts. We are in a recession. The chief issue is to stimulate demand in the economy, not worry about paying back national debt.

So far, so good. But then Sunak prioritised a corporation tax rise in the Budget. This lost the left of the party in a snap. They were lured into support for austerity because it started by targeting one of their enemies. But they didn’t see the trap. Once you accept the belt-tightening narrative, you are now in an austerity discussion. Austerity isn’t, as some believe, just about spending cuts. It’s about spending cuts and/or tax rises to reduce budget deficits in a time of weak or non-existent growth.

At first Labour held firm. But then, in the face of vocal left-wing criticism, it began to crumble slightly. Dodds told the Guardian  she would be open to future corporation tax rises. In terms of policy, this is perfectly reasonable. There may soon be a period of stronger growth in which tax rises would make sense. But in terms of messaging, it served to muddy what had until then been a clear position. The message needed to be simple: no talk of tax rises during a recession. Now it became a question of trying to parse the policy proposals from a series of increasingly nuanced statements.

Sunak’s Budget then introduced two major tax rises, but crucially he pushed them into the future. Corporation tax would go up in 2023. Income tax thresholds would be frozen after April this year. At the top rate, that would see many more middle earners enter the top rate of tax. But at the bottom it would freeze the tax-free personal allowance at £12,570, which hits low-paid workers.

What flummoxed Labour here was the date. By pushing it out into the future, Sunak dodged the charge that he was sucking demand from the economy during the recession. But that’s not as reassuring as it sounds. We have no idea how the recession is going to play out. New variants of coronavirus could mean we need future lockdowns. Pent-up spending after lockdown may not be as high as expected, or it may be so high that prices go up, making the personal allowance decision even more damaging to low earners. Many people could become unemployed during the gradual removal of furlough this summer. We just don’t know what’s going to happen, so we shouldn’t be making the decisions now. It’s an irrelevant debate when we need to be supporting the economy.

Polling then did the rest of the damage. Sunak’s Budget was the most popular in a decade, with 55% of people describing it as “fair” in a YouGov poll.

The combination of internal left-wing criticism, Sunak’s future implementation and polling support seems to have shifted Labour’s position. The party is now clearly planning on supporting the corporation tax rise. Worse, it’s going to support the changes to personal allowance. This is entirely the wrong call. This is no time to make set decisions on tax for a future that is extremely chaotic and unpredictable. Doing so accepts the overall narrative of belt-tightening and debt prioritisation.

What we’re left with, after a week of gradually shifting rhetoric, is a situation where it really must be impossible for a normal member of the public to ascertain Labour’s position. It’s genuinely quite difficult even when following these things closely.

This morning the newspapers are full of a hard deal for carers. NHS workers are being given a one per cent hike – below the 1.5% rate of inflation expected by the Office of Budget Responsibility this year. It’s completely against good economic or moral sense. It’s hard to come up with a policy which contradicts the public’s sense of fairness more forcefully, given the year we just had. But this, of course, is the remorseless logic of austerity. “Pay rises in the rest of the public sector will be paused this year due to the challenging economic environment,” a government spokesperson said last night.

Labour is opposing it. Of course it is: pay for NHS workers is its bread and butter. And there will be other austerity areas where the same is true – where its instincts, agenda and public opinion align. But focusing only on those makes the party look cynical and without principles, blowing whichever way the wind goes. It needs a firm intellectual foundation underneath the individual political attacks.

These questions are going to define the next period of politics. For Labour to oppose effectively, and get the electoral reward for it, it needs a solid and consistent position, which can be encapsulated in a sentence and which it pursues mercilessly. It had the start of that programme after the Dodds and Starmer speeches. Now it is starting to confuse and obscure it. Just as the foundation was built, they seem to be shattering it.

It’s not too late to fix that, but the party really does need to hurry up and do so. This week’s equivocation and policy confusion was precisely the wrong way to proceed.