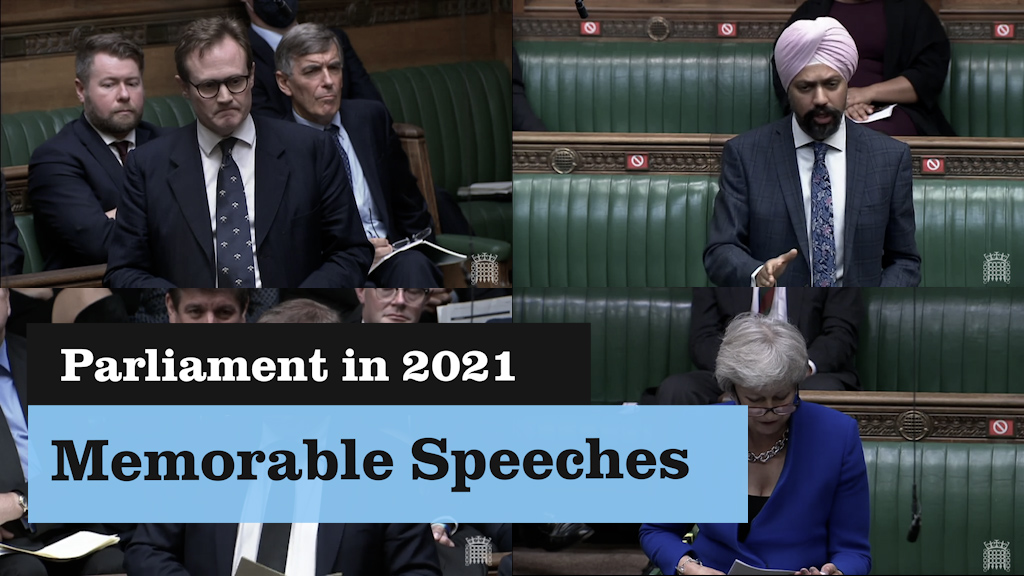 2021 saw MPs deliver powerful speeches on the big political stories of the year.

Whether it was pandemic, the fall of Afghanistan, or remembering a fallen colleague, the oratory skills displayed by these MPs cemented their speeches into UK political history.

Here are the highlights:

Boris Johnson was forced to apologise following an emotional and angry speech from Tanmanjeet Singh Dhesi in Prime Minister’s Questions in July.

As the prime minister listened on, the Labour MP spoke powerfully about the pain of following the rules and not being able to comfort his family through multiple losses due to the pandemic.

The MP for Slough called the cabinet ‘sycophantic, spineless and hypocritical’ over the inability to condemn Dominic Cummings for breaking the rules in May 2020.

13th July – Theresa May on the cut to Foreign Aid

Former prime minister Theresa May broke the three-line whip for the first time ever, when she voted against the government’s decision to cut foreign aid cut from 0.7% to 0.5% of GNI. Despite the motion passing in the House of Commons, May’s words won’t be long forgotten.

“We made a promise to the poorest people in the world. The government has broken that promise. This motion means that promise may be broken for years to come.”

15th August – Tom Tugendhat on the fall of Afghanistan

MPs sat in absolute silence, listening to Tom Tugendhat deliver a deeply emotional speech filled with anger, grief, and shame over the fall of Afghanistan.

Tugendhat, who served in Afghanistan, received an applause at the end of a speech that will likely go down as one of the great speeches in the history of the House of Commons.

Batley and Spen MP, Kim Leadbeater, delivered her maiden speech in the House of Commons in September during a debate on the legacy of her sister Jo Cox.

Cox was murdered in 2016 by a far right extremist. Leadbeater stood for her seat at a recent by-election, replacing Tracey Brabin in July.

In a moving speech, Leadbeater said: “I mean no disrespect to this place when I say that I would give literally anything not to be standing here today in her place.”

She also vowed to continue her sister’s legacy, saying: “If I can be half the MP my sister was, then it will be a huge privilege to get on with the job of representing the wonderful people of Batley & Spen.”

The former MP for Southend West was killed in a stabbing attack during a constituency surgery.

Close friend Mark Francois delivered an emotional but stirring speech to the House. describing Sir David as “the best bloke I ever knew”.