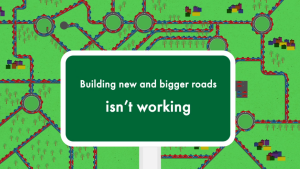 The end of the road?

The end of the road?

The CPRE's report The end of the road? Challenging the road-building consensus.

The Government would have us believe that building new and bigger roads reduces traffic and boosts the economy, while doing minimal harm to the landscape.

But there is a simple truth that governments over many decades have looked past, again and again.

Building more roads leads to building even more roads. And this isn’t good for us, our environment or even for the economy.

We did some research using Government data to investigate the benefits of road building.

In all but one of the road schemes we studied there was an increase, not a decrease, in traffic.

And the longer the schemes had been in place, the bigger the increases
in traffic were.

Building more roads encourages developments that rely on people having cars. With more cars, the extra road capacity is filled up, which creates more traffic.  Which in turn leads to more roads being built.

So, building roads to reduce congestion actually drives traffic up. But it’s not just in terms of reducing traffic that road schemes are failing.


Of the road schemes that were justified on the grounds of boosting the local economy, over three quarters had weak or no evidence of economic benefit.

And where there was evidence, it was not clear that the benefits were significant – or what was intended.

Economic gain was often slower than expected, or failed to materialise.

Some road schemes even drew development away from other local areas, such as town centres, where people can walk and cycle more easily.

The impact of new roads on the landscape was also a cause for concern.

Eight out of ten schemes were damaging to the landscape at one or five years after completion, with the remainder having a neutral or slightly beneficial impact.

And nearly two-thirds affected landscapes that were nationally or locally significant, were home to many species of plants and animals, or were culturally important.

Roads should be the last resort, but too often they are the first. Roads policy is failing to meet its own objectives.

It’s time to look again at our transport system and invest in ways to help people get around without needing more cars and more roads. The Government should:

There is a simple truth that governments need to acknowledge when it comes to road building.