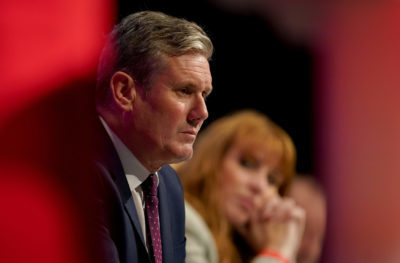 Starmer and Rayner vow to resign if issued Covid fines

Labour leader Sir Keir Starmer has vowed to resign if he is issued with a fine for breaching Covid rules.

However he has maintained that it was “absolutely clear” that he broke no laws and that he is “here to stay” stating: “I simply had something to eat while working late in the evening, as any politician would do days before an election, but if the police decide to issue me with a fixed penalty notice, I would, of course, do the right thing and step down.

“This matters. It matters because the British public deserve politicians who think the rules apply to them.

“They deserve politicians who hold themselves to the highest standards.

“And they deserve politicians who put the country first rather than themselves.

“They will always get that from me,” he explained to journalists this afternoon.

He went on to emphasise the difficulties of the restrictions, describing how: “People were left desperately lonely. They were separated from family and friends. Tragically, many were unable to see dying loved ones. This was a collective sacrifice. People were entitled to expect that politicians would follow the same rules as everyone else.

“When my mother-in-law passed away suddenly just before the first lockdown, my wife and I were unable to provide her father the support we wanted afterwards because we followed the rules.

“Barely a day has passed where we haven’t agonised over that decision. But we did it, because we followed the rules.

“We all found following those rules frustrating at times, I’m no exception to that. I had to isolate six times during Covid, pulling me away from my work and the things I love. But I did it, because we followed the rules.”

Starmer has been accused of breaching Covid rules after being recorded drinking beer in Durham’s local Labour party office after 10:00pm on 30 April 2021.

Covid rules at the time stressed that such indoor political meetings were only legally permitted and “reasonably necessary” for a campaign.

Last week the party admitted that deputy leader Angela Rayner had also been present at the gathering, despite previously denying this.

The Sun newspaper has also alleged that the group of Labour campaigners ordered enough food from a local curry house to feed 30 people.

Durham Constabulary said back in February that Starmer did not break the rules, but a fresh investigation was announced last Friday after they claimed to have received “compelling new evidence”.

Sir Keir has repeatedly called on the prime minister to resign after Scotland Yard slammed him and Rishi Sunak with £50 fines respectively for a birthday gathering in Downing Street during May 2021.

In his statement this afternoon, Starmer argued that he would not “casually” break Covid rules, and added that “[he does not] believe those accusing me believe it themselves.”