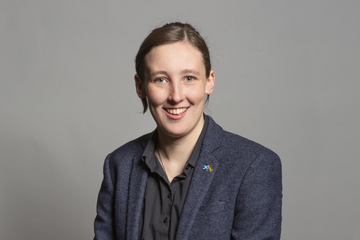 SNP Mhairi Black MP has argued that the UK is “sleepwalking towards fascism”.

In remarks made during a House of Commons debate on economic growth, Black said the country was “sleepwalking towards fascism…draped in red, white and blue”, presumably in reference to the Union flag.

PARLIAMENT: SNP MP Mhairi Black argues that the UK is "sleepwalking towards fascism…draped in red, white and blue" 💬 pic.twitter.com/6leTXGb2fs

She accused the Conservatives of focusing on “a manufactured culture war” and criticised “terrifying” plans to overhaul the Human Rights Act, stating: “Do they know how scary it is to sit at home and wonder if it is you—is it your rights that are up for grabs?”

She also rebuked government plans to process asylum seekers in Rwanda, explaining: “We tell our own citizens that their safety cannot be guaranteed in Rwanda, but we are perfectly happy to ship asylum seekers, people fleeing war and persecution, over to Rwanda as though they are cattle to be dealt with by someone else and despite knowing that the plan costs more than it will ever save.

“This is just little England elites drunk on the memory of a British empire that no longer exists,” she said. “We have the lowest pensions in Europe and the lowest sick pay. We pretend the minimum wage is a living wage when it is not. We miss our own economic targets time and again. We are happy to break international law. We are turning into a country where words hold no value.

She then went on to make her claims regarding fascism, telling MPs: “Over the last 12 years, I fear we have been sleepwalking closer and closer to the F word. I know everyone is scared to say it for fear of sounding over the top or being accused of going too far, but I say this with all sincerity.

“When I say the F word, I am talking about fascism—fascism wrapped in red, white and blue. You may mock and you may disagree, but fascism does not come in with intentional evil plans or the introduction of leather jackboots. It does not happen like that. It happens subtly.

“It happens when we see Governments making decisions based on self-preservation, based on cronyism, based on anything that will keep them in power, when we see the concentration of power while avoiding any of the scrutiny or responsibility that comes with that power. It arrives under the guise of respectability and pride, which will then be refused to anyone who is deemed different. It arrives through the othering of people and the normalisation of human cruelty.

“I do not know how far down that road we are. Time will tell, but the things we do in the name of economic growth—the warning signs are there for everyone else to see, whether they admit it or not.”

At the time of writing a clip of the speech posted to Twitter has over 32,000 likes.