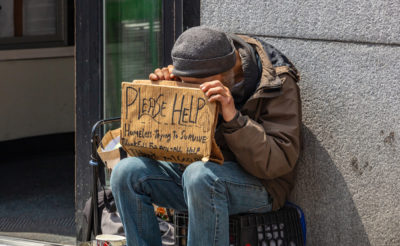 1.3 million Brits will be pushed into absolute poverty next year, think tank claims

Progressive think tank the Resolution Foundation have accused the chancellor of failing to deliver on his promises to cut taxes and help families in yesterday’s Spring Statement.

The report says that faced with an unprecedented squeeze on family’s household finances and a significant boost to the public finances, the chancellor opted for a big but poorly targeted policy package focused on partially offsetting some of the big tax rises he’d previously announced, rather than on supporting those families hit hardest by the cost of living crisis.

The analysis claims that the scale of the cost of living squeeze is such that typical working-age household incomes are to set to fall by 4 per cent in real-terms next year (2022-23), a loss of £1,100, while the largest falls will be among the poorest quarter of households where incomes are set to fall by 6 per cent.

The report also estimates that absolute poverty will rise by 1.3 million, including 500,000 children – the first time Britain has seen such a rise outside of recessions.

A £11,500 wage loss. With real wages in the midst of a third major fall in a little over a decade, average weekly earnings are on course to rise by just £18 a week between 2008 and 2027, compared to £240 a week had they continued on their pre-financial crisis path. This lost growth is equivalent to a £11,500 annual wage loss for the average worker.

The report also finds that the decision to bank much of the borrowing windfall set out by the OBR sees borrowing set to fall rapidly from 14.8 per cent of GDP in 2020-21 to 1.3 per cent of GDP in 2024-25 – lower than it was expected to reach pre-pandemic. This increases the chancellor’s fiscal headroom at the end of the parliament from £18 billion to £28 billion, the equivalent of a further 4 to 5p cut in the basic rate of income tax.

Torsten Bell, chief executive of the Resolution Foundation, said: “In the face of a cost of living crisis that looks set to make this Parliament the worst on record for household incomes, the chancellor came to the dispatch box yesterday promising support with the cost of living today, and tax cuts tomorrow. Significant measures were announced on both counts, but the policies do not measure up to the rhetoric.

“The decision not to target support at those hardest hit by rising prices will leave low-and-middle income households painfully exposed, with 1.3 million people, including half a million children, set to fall below the poverty line this coming year.

“And despite the eye-catching 1p cut to income tax, the reality is that the chancellor’s tax changes mean that seven-in-eight workers will see their tax bills rise. Those tax rises mean the chancellor is able to point to a swift fiscal consolidation and significant headroom against his fiscal rules.

“The big picture is that Rishi Sunak has prioritised rebuilding his tax-cutting credentials over supporting the low-to-middle income households who will be hardest hit from the surging cost of living, while also leaving himself fiscal flexibility in the years ahead. Whether that will be sustainable in the face of huge income falls to come remains to be seen.”