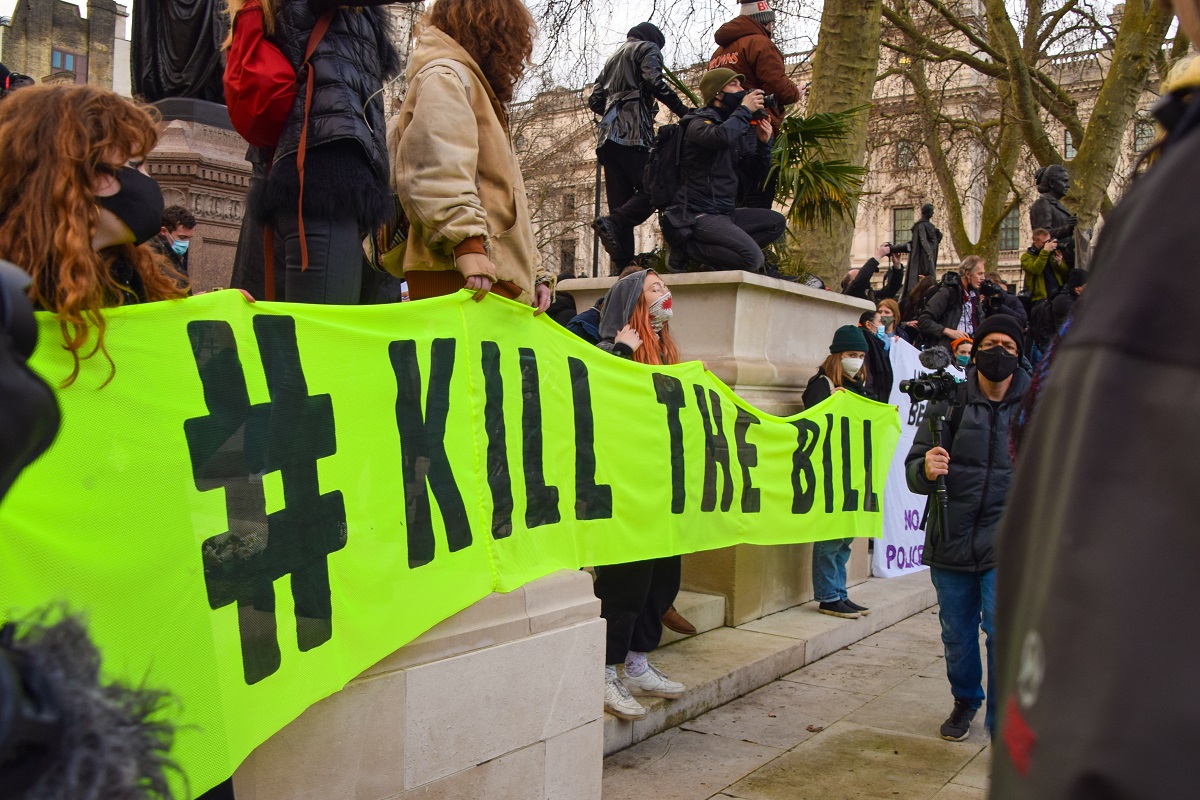 The truly frightening thing was that they didn’t even argue for it. Over two days of debate and dozens of speeches, not one government minister actually defended the anti-protest powers in the new policing bill. Only one MP did.

These are the most draconian restrictions we have seen on protests for decades, but those defending them on the government benches would not even mention them.  They simply pretended they did not exist. And then they passed them for second reading, by 359 votes to 263.

The bill gives police the power to impose severe restrictions on protests if they suspect they “may result in serious disruption to the activities of an organisation” or could cause “serious unease, alarm or distress” to a passer-by. This applies to every single protest outside parliament and indeed to any protest anywhere. There has never been a protest which you could prove would not alarm someone. They make noise. That is what they do. The bill puts the power as to whether a protest can be held entirely in the hands of the police.

And yet even this benchmark was considered too high. So the bill also gave the home secretary the power to change the legal meaning of the term “serious disruption” by statutory instrument – effectively sidestepping parliament. In future, if Priti Patel or one of her successors decides that a protest was legal but they still wanted rid of it, they could simply unilaterally change the law.

Yesterday afternoon, when Patel opened up the debate, she said it would give “police the power to take a more proactive approach” but that the “threshold at which police can impose restrictions on the use of noise at a protest is rightfully high”. It’s not high at all, of course. It is so low it includes every protest one can imagine.

We didn’t know it yet, but that would be the only time anyone on the government benches defending the measures made any reference to them at all.

Several Tory MPs stood up to say that the concerns about the right to protest were exaggerated. But they never once referred to the powers over noise. Instead, they read out a list of arguments handed to them by the party, saying that the new provisions were needed to tackle excessively disruptive protests. These examples included an ambulance that couldn’t get to a hospital, the Extinction Rebellion sabotage of a printing press and people handcuffing themselves to public transport.

It’s astonishing that only two Tory MPs spoke out in detail about the provisions. One was Fiona Bruce, who said they would “significantly lower the legal test for the police to issue conditions on protest”.

The other – remarkably – was Theresa May, who had acted as a hardliner when she served as home secretary. But even she was taken aback by what was being proposed here. “It’s tempting when home secretary,” she said to Patel from the benches above her, “to think that giving powers to the home secretary is very reasonable, because we all think we’re reasonable. But actually future home secretaries may not be so reasonable.” It was a mark of how far the country has fallen that May is now the voice of liberal conscience on the government benches.

Only one other Tory MP made any reference to the noise provisions. It was David Amess, who spoke out in favour of them. “My office looks onto Parliament Square and I have long complained about the endless demonstrations that take place,” he said. “It is very difficult to work because of the noise, with drums, horns and loudspeakers. Parliament being the seat of democracy, our work should not be disrupted.”

He is evidently an out-and-out authoritarian who wants to end all protests in Parliament Square and is therefore completely unfit for living in a free society. But at very least he had the courage to state these legislative measures for what they were. He was an honest authoritarian, and in the context of this debate that was evidently the most we could hope for: someone who would admit what they were doing.

Over the last year, we have heard a great deal from Conservative MPs on civil liberties and free speech. They have railed against the lockdown provisions to handle the pandemic. They have warned of a cancel culture in university campuses and demanded intervention by the state to prohibit it. They have said that conservative voices are not allowed in broadcast studios because of a woke takeover.

And now, here, the silencing had finally begun. Protestors were being told that they could not raise their voices. It was as clear cut an attack on free speech as you could possibly imagine. But to that, they had nothing to say. The great champions of liberty did not even offer a murmur of criticism. Philip Davies, David Davies, Steve Baker: not a whisper of dissent. In fact, Baker stood up at the end to say that Labour was “refusing to engage” with “legitimate limits on freedoms”.

We’ve been here before, of course. During the New Labour period, some truly disturbing attacks were made on civil liberties and free speech. But back then, ministers at least had the decency to argue for them. Some of those arguments were terrible. But they at least had the basic decency to offer them.

Today, the government did not even try to justify what it was doing. Tory MPs barely pretended to have read the bill, let alone understand its contents, let alone challenge them. The great champions of English liberties didn’t say a word.

It was a silence. A silence as deep and wide and profound as that which they intend to impose on protestors. And that was the most frightening thing of all.