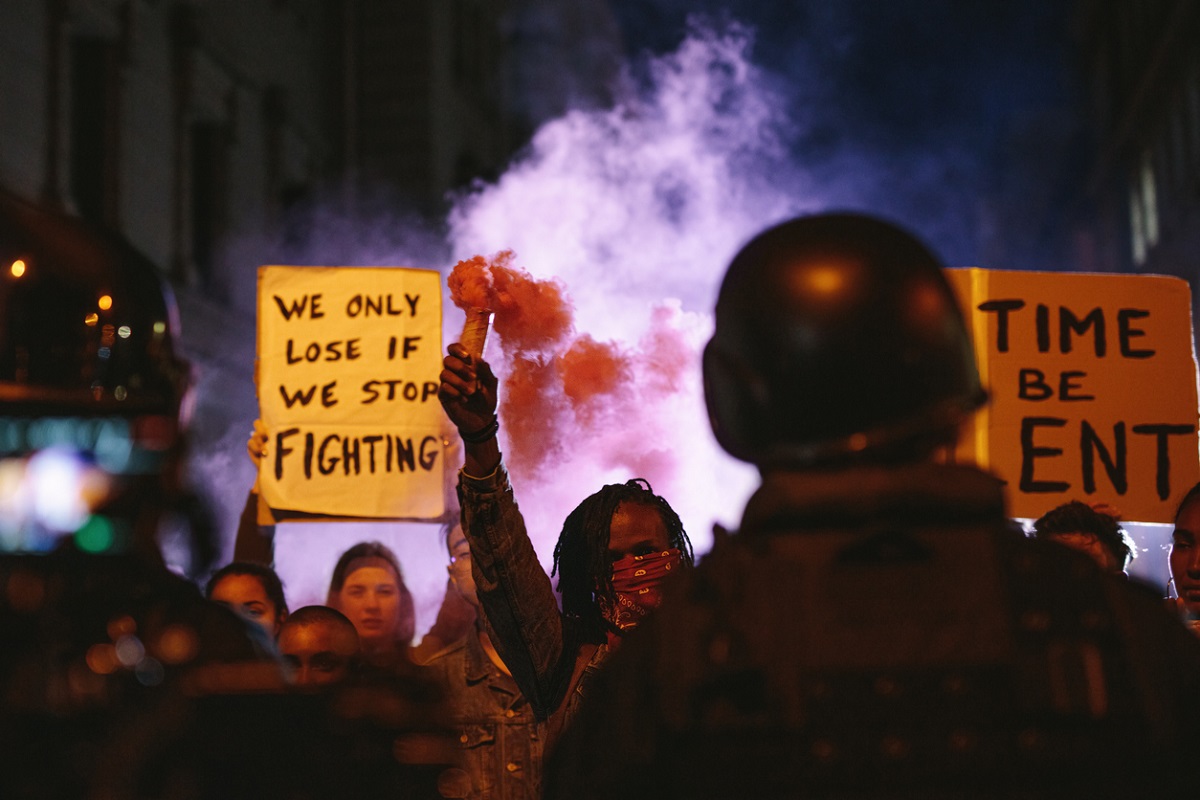 Lockdown hangover: Threat to the right to protest

Since the prime minster announced his roadmap out of lockdown, the national mood has changed. After a year of home-haircuts and no pub, any sign of an end to these restrictions would be greeted with joy and jubilation. But buried under this wave of optimism there are signs that those in power are seeking to retain some of these restrictions – and erode our ability to hold them to account in the process.

The right to protest is the lifeblood of a democracy. Yet it is under threat and the pandemic has super-charged the attack currently underway by the home secretary, who has made clear her disdain for public displays of dissent. Protest is an important way in which we can change and fight for a fairer, more just society. For many – particularly those who can’t be heard because they’re not allowed a voice (or a vote if this government has its way with Voter ID) – it might be the only way to stand up to power and demand change.

Since the first lockdown Liberty has warned that radical State powers ushered in during emergencies create the opportunity for our rights to be permanently undermined. Parliament must see this danger for the reality it is.

This also isn’t random opportunism or a direct response to an emerging threat. In fact, this move fits neatly into a long-term campaign to undermine the right to protest. The Metropolitan Police unlawfully banned protest in the capital for a month in 2019, and climate activists have faced injunctions obtained by companies to prevent them from protesting. The Stansted 15 activists were charged under counter-terrorism laws – the Court of Appeal found they had no case to answer, but the purpose of the charges were clearly intended to stifle dissent.

For all that this government talks about free speech, when it comes to protesting on the streets it is very keen on muffling the noise.

While criminalising protest should be concerning enough, it’s more worrying when understood to be only a small part of the story when it comes to this government’s approach to accountability.

While the pandemic has raged, this government has been quietly making plans to weaken the ways people can challenge government decisions and remove vital safeguards on accountability, whether through the overseas operations bill or via its bid to limit access to judicial review and the Human Rights Act, the consultation on which closed this week (Wednesday 3 March).

Those who are unconcerned by such plans should take another look at how this pandemic has panned out in England.

When the virus hit, the government drafted and passed the Coronavirus Act in days – the biggest limitation on civil liberties in a generation. The act gave the police sweeping new powers which saw a spike in discriminatory policing. It lowered care standards and made it easier for the government to spy on us; it enabled the postponement of elections. It also typified how this government acts. It prioritises criminal justice, punishment and control, while failing to support those most at risk.

Under the lockdown regulations that accompanied the act, hundreds of people have been threatened, arrested and fined for exercising their right to protest, and many of the most marginalised have had to cancel protests for fear of being arrested or fined.

State power is currently at an all-time high. The ability to keep this power in check has never been more important. Yet in the much-trumpeted announcement of the road out of lockdown, no mention was made of what is happening with regards to protest. It remains under threat – certainly if the Coronavirus Act remains on the statute books. In the coming weeks, MPs must vote on whether to renew this law.

We’re all well aware that we’re not in the same place we were a year ago, but it’s not good enough for parliament to renew the act because they haven’t thought of an alternative. The government has had 11 months to learn from its mistakes and create something better. With no sign they intend to do so, we’ve done it for them.

The protect-everyone bill, which Liberty has drafted in partnership with dozens of charities and front-line organisations, as well as lawyers and academics, is a blueprint for building a pandemic strategy we can trust and that keeps us all safe.

If parliament votes through the Coronavirus Act again, they are doing so knowing the damage it has caused. Yet there is clear reluctance by some in the cabinet to let some of these powers go.

Over the coming months, protest is no doubt going to be an important part of how the public voices its concerns on everything from Brexit to the impact of lockdown and Black Lives Matter. Whatever those concerns are, they deserve the right to be heard. How able people are to take to the streets now hangs in the balance, and if the Coronavirus Act is passed for a third time, that balance very much tips in the favour of government.